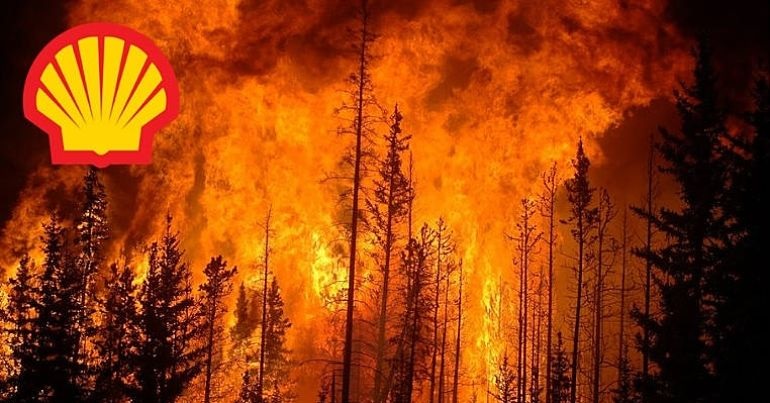 As the world burns, Shell – the world’s second biggest oil company – has asked people on Twitter what should be done to tackle climate change.

What needs to happen to help tackle climate change quickly? ⚡️ Cast your vote and join The Great Energy Debate LIVE from Singapore on November 23 at 2pm SGT. #MakeTheFuture

Reposting it won't change the sentiment.

Come back to us when you start spending more than about 5% of your money on renewables. #greenwash

If we are to have any chance of keeping global warming below 1.5C, we need to take much more drastic action than Shell is suggesting. As Twitter users said, we could start by ending fossil fuel subsidies:

End all government support for fossil fuels in the form of subsidies, public finance, and more. And Shell can stop lobbying lawmakers to keep the handouts flowing.

As DeSmog reported, 2017 report by the Overseas Development Institute found that:

the world’s seven major industrial democracies spent at least $100 billion (£70 billion) a year to prop up oil, gas and coal consumption at home and abroad in 2015 and 2016 despite their pledge to end fossil fuel subsidies by 2025.

Between 2013-15, the British government subsidised fossil fuels to the tune of $972m per year, compared with just $172m for renewables. Meanwhile, in 2016, the UK government gave Shell a tax rebate of over £110m. The company made $3.5bn in profits that year.

Leave it in the ground

Leaving fossil fuels in the ground was a popular response to Shell’s tweet:

Curiously, number 5 slipped off your absurdly self-appointed, wildly limited list of options: Leave the fossil fuels in the ground. And how about this for 6: Dismantle the growth economy & cherish all life on earth.

False poll…carbon capture, more renewables, greater efficiency and leaving unburnt carbon in the ground are the ways we might have a chance and as a giant in the energy field Shell and others have the responsibility to fix the damage they’ve caused.

A 2015 study found that around 80% of the world’s known coal reserves, 50% of known gas reserves, and 30% of known oil reserves needed to be left in the ground to prevent climate chaos. The figures today are likely to be even higher. Yet Shell is not just extracting fossil fuels from known sources, it’s actively looking for more.

This brings us to another proposal put forward on Twitter: to prosecute Shell executives “for crimes against humanity”:

Your business model is liquidated and your executives are tried in the Hague.. thank u, next https://t.co/asgYE7dnNx

#KeepItInTheGround: an immediate and complete phase out of fossil fuel use and prosecution of your executives for crimes against humanity.

This proposal may not be as far-fetched as it seems. Documents uncovered by a Dutch newspaper earlier this year show that Shell was warned by its scientists in the 1980s about the potential dangers of global warming. Despite this, Shell took little action for another decade, stressing the “uncertainties of climate science”. A 1995 management brief said that Shell’s:

review of the scientific uncertainty and the evolution of energy systems indicates that policies to curb greenhouse gases beyond ‘no regrets’ measures could be premature, divert economic resources from more pressing needs and further distort markets.

The 1988 report by Shell’s researchers said that the issue “could have major social, economic and political consequences,” and that the resulting upheaval could be “the greatest in human history.” But seven years later, Shell was claiming that:

a definitive, unequivocal position on the science of global warming … quite simply is beyond current capabilities.

And while we haven’t seen oil company executives in the dock at the Hague yet, people around the world are bringing lawsuits against oil companies for their part in climate change.

Friends of the Earth Netherlands is suing Shell, demanding that it reduces greenhouse emissions in accord with the 2015 Paris Climate Agreement. In the US, several lawsuits are ongoing against fossil fuel companies, while the tiny island nation of Vanuatu – devastated by a cyclone in 2015 – has recently announced that it’s considering suing fossil fuel companies for damage caused by climate change.

Big Oil is the problem

We’re facing climate chaos. The Intergovernmental Panel on Climate Change has warned that we have just twelve years to act if we are to have any chance of keeping global warming below 1.5C.

And however much ‘greenwash‘ Shell puts out, most people seem skeptical. Companies that continue to profit from fossil fuels are part of the problem, not part of the solution. The sooner we close them down, the greater the chance that our planet might survive.