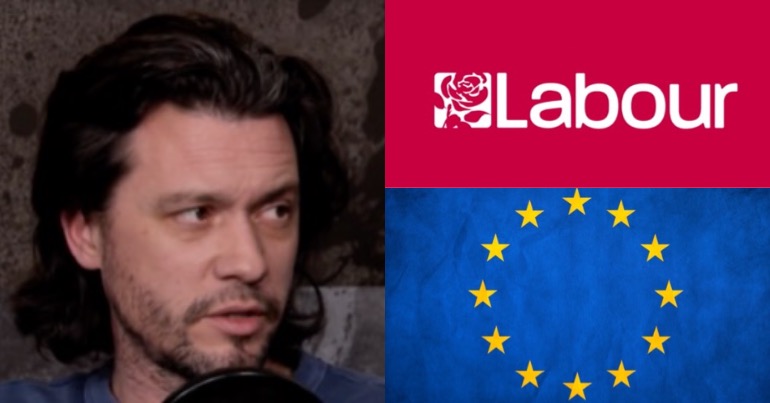 As Theresa May’s zombie government generally continues negotiating with itself over Brexit, how does Labour’s approach fare? And where should it go from here?

The Canary sought answers from scientist, socialist and anti-Brexit campaigner, Mike Galsworthy. He warns that if Labour’s Brexit tactics are wrong, it could be walking into a Tory trap.

Who is Mike Galsworthy?

As The Canary reported in 2018, Galsworthy has expressed anger at the centrist influence over the ‘People’s Vote’ campaign he endorses – namely Blairite Alastair Campbell. This is significant, as the scepticism regarding a second referendum felt by some on the left is due to its association with centrist figureheads hostile to Jeremy Corbyn.

So, Galsworthy bucks the trend and demonstrates that supporting a ‘People’s Vote’ doesn’t stop you being a socialist, or supporting the Labour leader.

What Brexit approach could Labour take?

It’s no secret that Jeremy Corbyn’s office would really rather avoid another public vote on Brexit [but] it’s also strong Labour policy to avoid a crash-out Brexit at all costs.

So, if Labour doesn’t want a ‘crash-out’, ‘no deal’, World Trade Organisation (WTO) Brexit – whereby the UK has to rely solely on WTO rules – and dislikes the prospect of another public vote, then Galsworthy believes it leaves only one choice:

Essentially it forces the party to back Theresa May’s deal in one way or another.

But how could this happen? According to Galsworthy, there are two principal possibilities:

Corbyn and May agree to forge a deal and present it to the EU. But regarding this option, Galsworthy warns, “that takes time and leaves Labour also carrying the can for Brexit”. In short, Labour could be held jointly responsible for a Conservative-led Brexit, if it goes as badly as forecast.

Labour could whip MPs against Theresa May’s deal. However, Galsworthy says it could “secretively” allow some Labour MPs to support May’s deal e.g. those in staunchly pro-Brexit constituencies.

This option would mean that “Labour opposes the bad deal, the Brexit vote is honoured and the Tories carry the blame for it”. The benefit of this option for Corbyn being that “the rebel MPs will receive the fiery backlash [for breaking the whip to vote down May’s deal]”. Corbyn could then conduct a “forgiveness tour”. He could explain that he understood the rebels’ desires to represent their constituents’ views on Brexit, yet be sympathetic to remainers’ frustrations.

Galsworthy says that this “Sounds like a fairly clever option”. He added:

Many regard last week’s votes on the Cooper amendment and other amendments as a trial run of this, with high numbers of even shadow ministers voting against or abstaining from the whip. Start the habit now, then the big day won’t stand out as anything different.

But could Labour be heading for a Tory trap?

1. Trap one: a centrist rebellion and a party split

Galsworthy’s relentless campaigning has made him an insider to Westminster’s Brexit politics. He warns that:

I know for a fact that anxious Tory MPs have been reassured that if they can just get Brexit over the line, the Labour Party will likely split.

This, of course, is what the Conservatives surely want to happen. But why would they split? After all, if Labour whipped MPs to vote down May’s deal and rebels vote for it anyway, it would look like it’s done all it can? No, according to Galsworthy, it would split because:

The strategy is hardly a secret. Simply everyone is talking about it…[so] even if Labour MPs tipping May’s deal into victory were to happen by accident, not design, the idea is already out of the bag and it gives those Labour centrists every bit of fuel they need. They can just claim it was Corbyn’s nudge-and-wink and vast swathes of Labour’s base will believe them and scream betrayal.

What does this mean? Put simply, Galsworthy argues that if Labour allows May’s deal through parliament, believing it to be a softer option to a hard, right-wing WTO Brexit, it may get the latter in the future anyway because of the European Research Group (ERG).

The ERG seeks a hard Brexit withdrawing the UK completely from the customs union and European Economic Area. The group has been linked with secretive right wing free market organisations who seek to radically deregulate British standards to help business, e.g. environmental regulations.

So how could this happen? As Galsworthy explains:

The Tory ERG still control May – and they want a no-deal Brexit in order to immediately invoke emergency measures, engage extreme deregulation and sign a ready-prepped deal with Trump.

This, Galsworthy argues, is why ERG hardliners like Jacob Rees-Mogg are suddenly supporting May, because of the so-called ‘Gove plan’:

If the ERG cannot get out on a no-deal Brexit, then they need a deal just to get out. After which, they can just rip up all agreements and have their no-deal Brexit anyway. They’ve already excitedly stated this as an option, but then went suspiciously quiet on it. ‘You can make and unmake treaties. Treaties can be unmade’, said James Cleverly to The Telegraph in August, reassuring readers that trade deal planned with Donald Trump could break any standards agreed with our European partners as needed. What’s to stop them?

So signing a deal becomes a path for no-deal Brexit. Labour should want no part of that. All manner of excuses can be found to rip up treaties when out.

Why would a public vote (second referendum) avoid these traps?

For Galsworthy, there are only two viable options: “a general election, or [a] new public vote on Brexit”. But he passionately believes a second public vote is preferable and “contains within it a golden opportunity for Labour”.

This, Galsworthy contends, is why: if the public backs the Brexit deal in a public vote (or a hard no-deal Brexit) then the same mess returns to the Conservative government to sort out (and with no time to do so). This would mean no political loss for Labour. However, Labour would gain big if the public backed ditching Brexit, because Galsworthy says the government would collapse like a house of cards, due to:

Galsworthy says all of this combined offers Labour the:

opportunity to sweep into the wreckage with inspiring solutions to all the problems that tired Tory Brexit could never fix.

That’s, at least, the view of a socialist who’s campaigning for a new vote on Brexit.