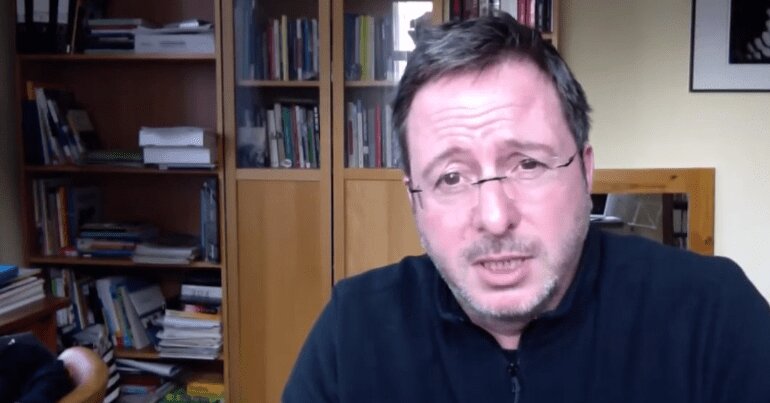 “Worse than they’ve ever been”

Speaking to The Canary, Robinson said:

Things are actually much worse than they’ve ever been at any point. We have a crisis.

The co-director of the Organisation for Propaganda Studies argued that’s largely because of a combination of two points:

Chomsky and Herman’s propaganda model views the corporate media through five filters. These are:

Academics and activists use these five filters to explain corporate media bias and predict its behaviour.

“Those filters are now more powerful”

Chomsky and Herman first published the propaganda model in 1988. But Robinson, chair in politics, society and political journalism at Sheffield University, said the filters have only got worse today:

Those filters are more powerful than they have been in the past… concentration of ownership… has increased and increased over the years. Reliance upon sources certainly continued… You also have this powerful effect… certainly in the last 20 years of this increasing financial insecurity in the mainstream media, which has created a situation where journalists have become ever more risk averse and… ever more reliant on public relations.

The mainstream media… have always been outgunned by the PR people. But that’s more the case today than it ever has been in the past:… This increasing use and reliance on material which is generated by public relations whether it’s from government or big business or other powerful actors.

Robinson then pointed to the late stage of the Vietnam War, insisting there was more dissent from mainstream journalists at that time. He contrasted that to 2019:

We’ve had 17 or 18 years of… regime change war now, which the West has been instigating or fuelling… in conflicts from Afghanistan through to Iraq… It’s difficult to find anywhere in the mainstream media a serious challenge to what is a very, very obvious war policy which has been pursued certainly since 9/11.

The Guardian is just as bad

Robinson said outlets like the Guardian are only part of the problem. He echoed journalist John Pilger’s wider point about the media when saying:

The Guardian has always been a mouthpiece for the establishment

He also said that the establishment is trying to “regain control through almost direct censorship”, citing Facebook gaming its algorithms and banning dissident political pages. Indeed, former White House cybersecurity director Nathaniel Gleicher recently oversaw the censorship of hundreds of Facebook pages. An array of these pages criticise governments and ‘the establishment’.

Because of the level of propaganda, Robinson championed the role of independent media:

The only place you hear people speaking truth to power now is in the alternative, independent media start-ups such as The Canary.

As well as independent media, it is up to citizens to think critically about official narratives. We must fight internet censorship and ensure that free discussion can continue in online spaces. Together we can overcome the propaganda of the mainstream media which, Robinson says, is at its worst point in history.