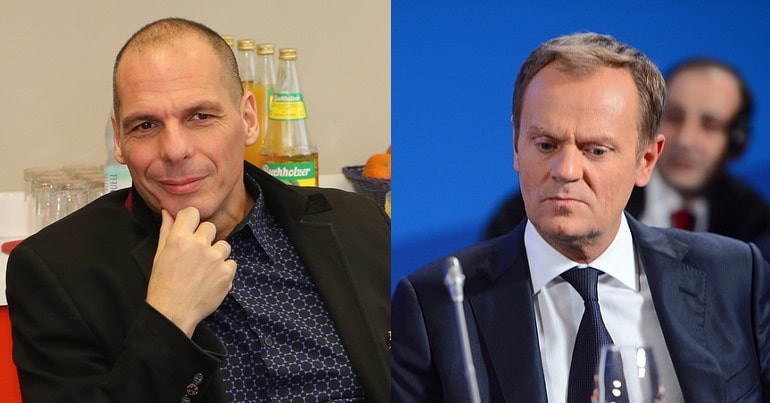 Former Greek finance minister Yanis Varoufakis has nailed why Donald Tusk belongs in the same place in hell as Brexit leaders. On 6 February, Tusk broke with the EU’s generally professional veneer to consider a “special place in hell” for Brexit promoters with no plan.

Socialism for the rich, capitalism for working people

In response, Varoufakis rebuked the president of the European council. He called out Tusk for his part in making working people pay for the financial crisis:

Probably very similar to the place reserved for those who designed a monetary union without a proper banking union and, once the banking crisis hit, transferred cynically the bankers' gigantic losses onto the shoulders of the weakest taxpayers.

Since the economic crash, the EU has enforced austerity budgets on member states with the Euro. While Eurozone countries set their own budgets, the European Commission essentially signs it off. And in October 2018 the commission formally rejected Italy’s budget. That’s because the Italian government’s spending plans did not contain enough austerity. In Greece, meanwhile, EU-imposed budget cuts – due to conditions on loans it received – pushed the country to a peak of nearly 28% unemployment.

So Varoufakis was less than impressed with neoliberal Tusk’s grandstanding on the Brexit debate. The economist and academic effectively argues Tusk belongs in hell nearby self-serving Brexit leaders such as Boris Johnson, who compared EU behaviour to the Nazis.

Labour leader Jeremy Corbyn has long opposed the economics of the EU, insisting the union was bringing in an “unaccountable central bank” and a “free market Europe”.

Indeed, it’s important to note that Eurozone members have essentially handed over their formerly sovereign currency to an austerity-driven bank, the European Central Bank (ECB), in Germany. The European Commission’s recent rejection of Italy’s budget demonstrates this loss of state power. If Eurozone countries try to carry out investment-led programmes, then foreign bureaucrats can attempt to squash their budget. That can restrict governments from investing in education, health, transport and other essential services.

Yet, as Varoufakis points out, it was the global ruling class that caused and then defended the 2007/8 financial crash. They did so partly through:

Still, Tusk played a part in pushing the responsibility for the crisis onto working people across Europe. With that in mind, Varoufakis took the former prime minister of Poland to task for painting himself as some kind of anti-Brexit hero. And he nailed it.