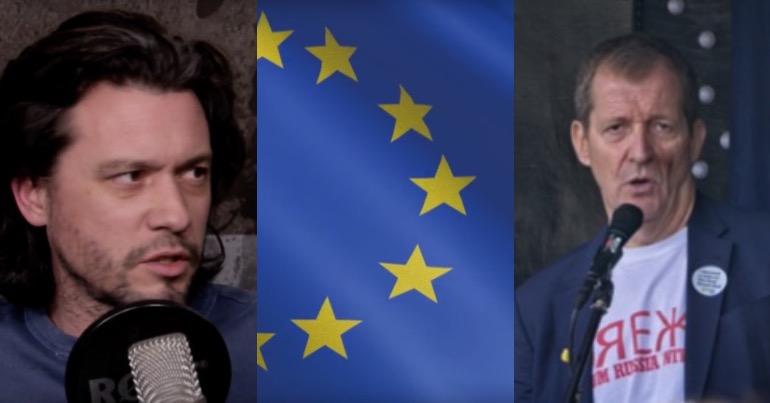 Prominent anti-Brexit campaigner Dr Mike Galsworthy has spoken out about the negative impact he feels arch-Blairite Alastair Campbell has had on the People’s Vote campaign.

During a Novara Media interview, Aaron Bastani asked Galsworthy – the co-founder of Scientists for EU – how he felt about the influence of Campbell on the campaign to stop Brexit.

Do you not think he’s a negative for the cause you care in?

Yes, he is and I’m happy to say that. I don’t care if he watches it… He has dominated it [the campaign] too much and I think that gets in the way…

Who is Alastair Campbell?

Campbell is a former spokesperson for Tony Blair. He also established the New European, a publication dedicated to stopping Brexit and representing remain voters. And he has been a prominent face of the People’s Vote campaign, which he also serves as an adviser.

But Campbell is a figure of contempt for many on the left; most typically for his infamous role in justifying the invasion of Iraq, which led to hundreds of thousands of deaths.

In recent years he has provoked further hostility from the left for his scathing critiques of Labour leader Jeremy Corbyn, claiming that:

Galsworthy’s full interview is well worth a watch for those on the left. It addresses in detail left-wingers’ common concern that state aid – and Corbyn’s manifesto – may be impossible under existing EU membership.

And perhaps most interestingly, Galsworthy explains his own preference for a People’s Vote BEFORE a general election, which he thinks would be to Labour’s advantage.

He also spoke of his desire to champion the elements of the People’s Vote campaign that sprang up around the country. This would undermine the perception of a London-centred campaign that’s dominated by a metropolitan middle-class within the Westminster establishment.

You can watch the interview below:

#FBPE: Not just a bunch of centrist Blairites

The #FBPE (Follow back pro-EU) movement on Twitter – discussed here in detail by the Guardian – has become incredibly divisive in recent times. Many on the ‘Corbyn left’ now perceive its ranks as simply consisting of disgraced Labour grandees, failed Labour leadership hopefuls, Lib Dems, neoliberals, centrists and general Corbyn-hating obsessives. But Galsworthy’s public criticism of Campbell suggests that the stop Brexit movement is more politically diverse than is often portrayed.

Campbell has tried to re-invigorate his career by making himself the face of the stop Brexit and People’s Vote movements. Galsworthy’s intervention is welcome for those on the left who oppose Brexit, but feel uncomfortable with the remain campaign’s associations with figures such as Campbell.