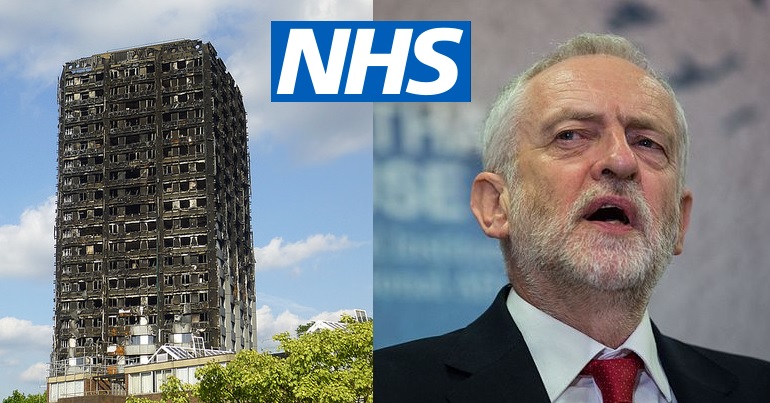 A private company with links to Grenfell Tower has made its third attempt to sue the NHS. And this time, it’s blaming Jeremy Corbyn for the legal dispute it’s having with our public health service.

Throwing its toys out of the pram

Ryhurst is an estates management firm that was on course to deliver a contract for the Whittington Hospital Trust. It’s also a subsidiary of construction company Rydon Group, which was the lead contractor for the refurbishment of Grenfell Tower. So Rydon oversaw the installation of cheap, flammable cladding that contributed to the deaths of 72 people in the tower.

In June, however, the trust announced it would drop the contract with Ryhurst. The trust says its financial position has improved since the tender process started in 2016. It also claims it has now made connections that mean it can “access additional support from a range of partner organisations”.

So that’s that then, right? Wrong. Because Ryhurst is suing the trust to force it into the contract and pay out compensation. The company alleges that the trust dropped the contract due to political pressure. In its submission to the High Court, it claimed:

Ryhurst said there were “a number of MPs, including Jeremy Corbyn” who applied that pressure.

Ryhurst isn’t the only private provider to sue the NHS for not giving it a contract either. Richard Branson’s Virgin Care did exactly the same in 2017 when it lost out on an £82m contract. Virgin Care received an undisclosed financial settlement after it brought legal action against NHS England, Surrey’s six clinical commissioning groups (CCGs), and Surrey County Council. As The Canary reported at the time, there are credible claims that the total settlement was in excess of £2m.

Cost of doing that privatising business

This sorry situation, whereby the NHS has to spend its inadequate funding fighting legal actions from corporate hacks, is the result of reforms to the NHS. In 2012, the Conservative-led government introduced legislation that made competition compulsory in the UK’s healthcare. In practice, that has allowed private companies to scoop up the most profitable parts of our health system, and be paid for it handsomely with our taxes. Clearly, those companies don’t like to hear the word ‘no’.

But as the National Health Action Party’s (NHAP) co-leader, Dr Alex Ashman,pointed out:

The NHS is a public body funded by taxpayers’ money. The public ought to have the right to have a say in how money in the NHS is spent. People are deeply uncomfortable at the thought their taxes – which they want to be spent on frontline care – could go towards lining the pockets of a firm with links to the Grenfell Tower disaster. But, yet again, the Health and Social Care Act is overriding the wishes of the public by giving big business the power to sue the NHS if it doesn’t get its own way – costing the NHS even more money which ought to be going to frontline services. Hardworking NHS Trusts deserve better than this. It is a disgrace.

It is a disgrace. It should also be one of the many reasons these private companies only hear the word ‘no’ from now on when they try to get their greedy little hands on more of our NHS.