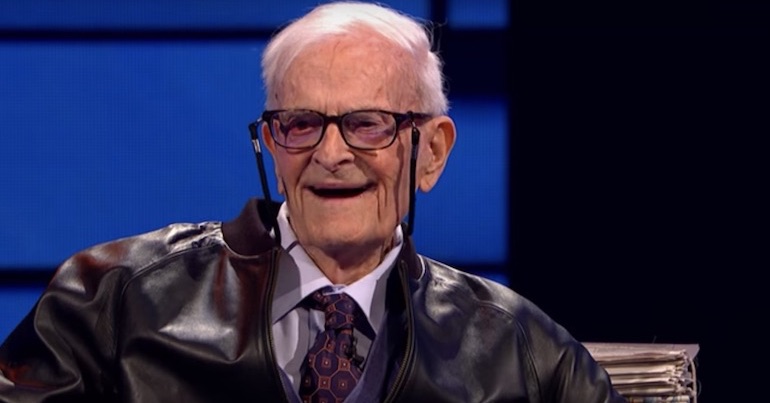 The 95-year-old author, activist and campaigner Harry Leslie Smith is currently in hospital. So thousands of people around the world are sending him love, because the self-declared ‘world’s oldest rebel’ is such an inspiration.

On 20 November, Smith went into hospital in Canada. His son is giving regular updates on his progress:

After being examined by the icu doctor, Harry exclaims, " I can assure you, I am not ready to die because I have too much work to do."

He is an inspiration to many for his untiring work defending the NHS, supporting refugees and his powerful words about peace. As Smith himself said, he’s also “the world’s oldest rebel”:

“I am Harry Leslie Smith. I am the world’s oldest rebel.” #IstandwithHarry pic.twitter.com/ER4NRESv44

The hashtag ‘#IStandWithHarry‘ is trending on Twitter as thousands of people around the world send their love and solidarity. From Jeremy Corbyn:

Very sorry to hear this. Please pass on my best to Harry. We need him to get well soon as the National Health Service, and our movement, needs him.

To activists and campaigners:

I certainly don’t call the shots round here, but I must admit, I’d love to see #IStandWithHarry trending across the United Kingdom.

There’s good reason to wish him love and a swift recovery. Because the man is truly a legend. And his son says the messages mean a lot to him right now:

I told Harry before he fell into a deep sleep about the concern rippling across Twitter for him and he said to me, "tell them, I love each of them so much."

A rebel with a cause

Smith is a war veteran and a powerful advocate for peace. In 2013, comments he made explaining why he wouldn’t wear a poppy again went viral. His book Harry’s Last Stand: How the world my generation built is falling down, and what we can do to save it is a bestseller. It’s a powerful critique of the impact of “NHS cutbacks, benefits policy, political corruption, food poverty, the cost of education”.

Smith’s analysis of the current political climate and the echoes he sees with events leading up to the outbreak of war in 1939 show his wisdom. In 2017, he wrote in the Guardian:

Because I am old, now 94, I recognise these omens of doom. Chilling signs are everywhere…

After years of Tory government, Britain is less equipped to change the course of history for the good than we were under Neville Chamberlain, when Nazism was appeased in the 1930s. In fact, no nation in Europe or North America has anything to crow about. Each is rife with inequality, massive corporate tax avoidance – which is just legitimised corruption – and a neoliberalism that has eroded societies.

I'm spending the last years of my life touring the #refugee hot spots of the world to find a solution to this crisis https://t.co/hG7dqOR8AU

And he has offered continued support for a Cobyn-led government:

Harry Leslie-Smith was one of the first people to support Jeremy Corbyn as Labour leader back in 2015 and has continued to support him since.

Here he explains why Corbyn is best man to lead the party. #istandwithHarrypic.twitter.com/muVvNFc9Zz

His ongoing support for the NHS has also been unshakeable:

Harry Leslie-Smith was there before we had the NHS but also was there when the NHS was established and saw how it helped people. Its a national treasure thus we must defend it! pic.twitter.com/IufMYtNFAh

So get well soon Harry, because we love you and we need you. So many of us wish you well and we won’t stop until you’re well again.