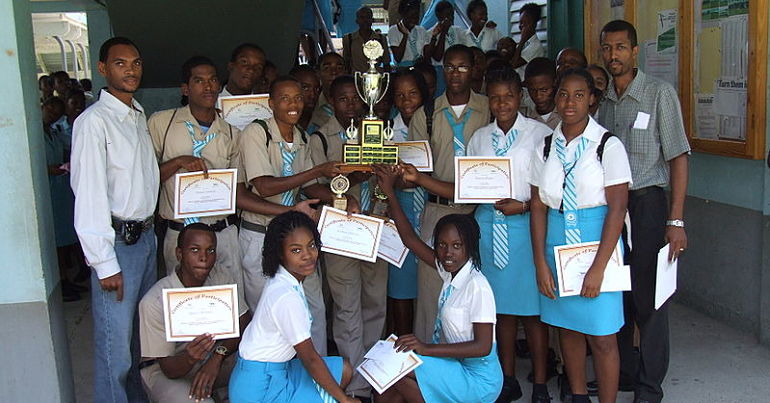 The cost of electricity in Jamaica is among the highest in the world. That means Jamaica’s already under-funded educational system is spending much of its budget on keeping the lights on rather than on vital teaching resources. And children from poor backgrounds are worst affected by this failing educational system; some schools have a 0% pass rate, for example.

As a result, disadvantaged students leave high school lacking the necessary skills for employment – let alone meaningful employment. According to a Jamaican call centre executive, “over 50 per cent of high school graduates do not have the skills necessary to succeed in the workforce, including mastery of English”.

To find out more, The Canary spoke to John Lennon from the Let’s Build a Better Jamaica campaign, which seeks to raise funds for Jamaica’s educational system by investing in renewable energy.

One Jamaican MP has previously described the country’s schooling system as “educational apartheid”. And Lennon agrees. He insists that:

The system is not fair: it is tiered and dependent on wealth… The fact is, education needs much more money but the government has no plans to increase funding. So education will remain substandard, and poverty perpetuated.

Separated by their families’ economic status, children often pass various decent schools on their morning walk to finally reach their own ‘underperforming’ schools. Many of the latter, meanwhile, rely on charity donations to get by.

Since the poor are being educated to a level for McJobs, increased spending is unnecessary.

Education is underfunded and substandard because our schools are spending half their resources on electricity. So an obvious solution is to take them off the grid. It is more than economically viable.

Indeed, as far back as 2014, one Kingston-based school decided to get off the grid by installing solar panels, reducing their energy costs by around half. The country’s power supplier, the Jamaica Public Service company, was so shocked by the reduction in energy costs that they thought the meters had been tampered with.

In a more recent case, another Kingston-based school switched to solar panels in 2017. It reduced its energy bill “by as much as 50 per cent”.

Instead of using taxpayers’ money to indefinitely pay electricity bills, schools should service fixed-term loan agreements to pay for their own solar facilities. Repayments would be substantially less than current bills, and schools could expand to generate income. No austerity. The country would have assets. It also aids climate action and impacts numerous Sustainable Development Goals.

Lennon also accuses Jamaica’s mainstream media of consistently ignoring his attempts to address the country’s problems. And he says it is failing to report accurately on the state of education:

The viability of renewables is not reported over the airwaves. Thanks to our journalists, people in the street believe solar is an expensive luxury… If they knew the truth, they would take to the streets tomorrow.

He claims that Jamaica’s main TV and radio network, as well as the news anchor for the country’s second TV network, have failed to report on his findings:

I have contacted many journalists and media organisations. But I never get a reply.

I thought that the purpose of journalists was to provide the public with verified information so they can make meaningful decisions about their lives, and to hold those in power accountable for their actions. Not in Jamaica.

Jamaica “is blessed with sunshine”, Lennon says, yet “cursed with backward looking and inept governance”. The Let’s Build a Better Jamaica campaign looks to change that.