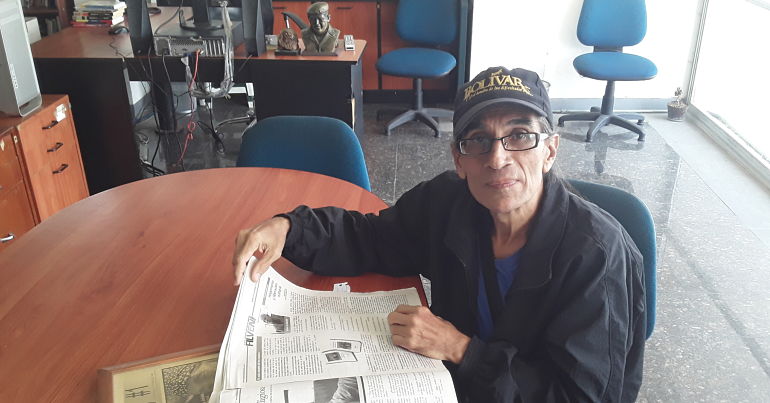 On 20 March, I had the pleasure of meeting Iván Padilla Bravo, founder of Venezuelan cultural weekly Todasadentro and one of the country’s most seasoned political activists.

We met on the 24th floor of the Ministry of Culture in Caracas, Venezuela’s capital city. Another journalist was already waiting in the lobby. He signalled to me to look out over the city’s skyline. “Look out there. Do you see war? Conflict?” he asked jokingly. Below, the city passed by like any other. 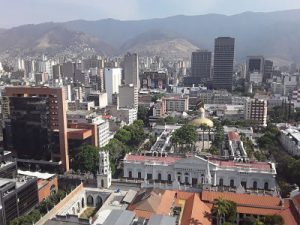 I sat with Padilla shortly after, and asked about his political life and the current situation in Venezuela. His answer began in the years long before the election of late president Hugo Chávez in 1998:

I’ve been in Venezuelan revolutionary movements since I was young – and now I’m not so young. I was put into a maximum-security prison for nine years, in Cuartel San Carlos. It was the most important prison in Venezuela at the time. My prison guards were military, from the same generation of Chávez. For these reasons, when Chávez appeared in Venezuelan politics, the majority of revolutionaries didn’t trust a military figure.

He explained that he was imprisoned for “a political military decision to kidnap the vice president of a US company” which was meddling in Venezuela’s internal affairs. He continued:

Chávez’s public discourse was one of sincerity, one of hope. Because finally, for me, the project of Chávez was one of class confrontation – the same that [Karl] Marx saw in England in the [19th] century.

Before Chávez put a new Venezuelan constitution to a referendum in 1999, Padilla abstained from voting. Up until then, he said, Venezuela was:

a country dominated by gringos, by Yankee [US] imperialism; a country with huge wealth, but not being used for the benefit of the people.

Alternative media and ‘the silent war on truth’

Padilla took out a framed version of his journal’s first edition, from 17 April 2004. It marked the 150-year anniversary of the abolition of slavery, accompanied by an image of an indigenous woman and the headline: “The struggle for freedom continues”. 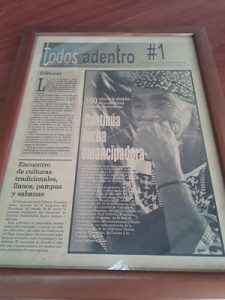 The journal’s name was slightly different, however, with ‘todos adentro’ (‘everyone inside’) written instead of ‘todasadentro’ (using the feminine version of ‘everyone’ in Spanish, ‘todas‘). Padilla explained:

I then spoke to him about the Western narrative on Venezuela. Does the corporate media command a similar sway over public debate? He said:

For years, Venezuela was the victim of corporate media misinformation – the silent war that destroys reality; kills truth; produces lies. But the corporate media doesn’t have as much power here anymore.

He then spoke about the role of independent media during the 2002 coup attempt against Chávez:

The people reacted to the coup against Chávez – but their actions were met with silence by Venezuela’s media. Those who believed in this [independent] media soon realised that the only way to find reliable information was through alternative means. We’ve now discovered the power of independent and alternative media models.

The conversation moved onto culture more widely. I told Iván about an article I’d seen in ArtNet, which reported damage of Picasso canvases to evidence a wider destruction of culture in Venezuela. I asked what he thought about the focus on high culture in a country dominated by grassroots organisations. Iván took out the frame of his first edition again:

Look at this. You never see this [an indigenous woman’s] face in major outlets. What we are defending is popular culture. The cultures of the proletariat class, the workers, those otherwise made invisible.

He took out more magazines from a filing cabinet across the room:

Poetry festivals; rural rappers; indigenous people. The first war is in people’s minds – we need to have a conscience of who we are and create a society of equals with that understanding.

The work of alternative media outlets in Venezuela is an important reminder of the power of grassroots organisation. As in 2002, it is leading the fight against US imperialism as well as offering a voice to the country’s otherwise forgotten people.