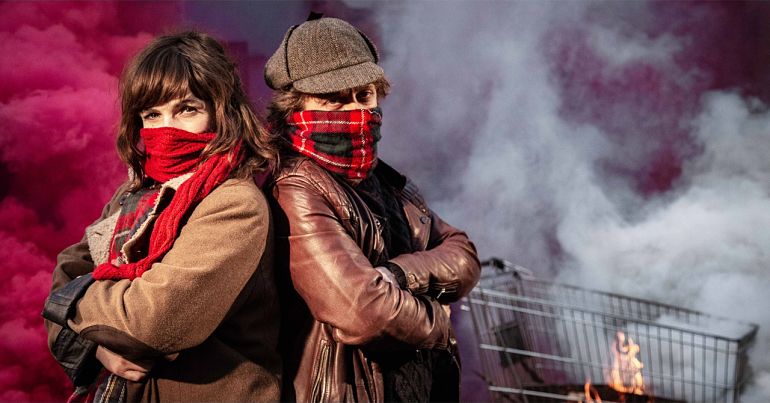 UPDATE: This article was amended and the headline adjusted at 9.40am on 26 March to reflect that the artists will not so much ‘set fire’ to the debt as ‘blow it up’.

Two artists are working to lift the lid on the UK’s spiralling debt crisis. More than this, they’re actually going to blow it up too. Artist Hilary Powell and filmmaker Dan Edelstyn have been working on a project called Bank Job for over a year. Through this, they set up the Hoe Street Central Bank (HSCB). This project draws attention to the growing personal debt crisis sweeping across the UK.

On 13th March 2019, HSCB sent out letters to people who owed a total of £1.2m in debt. These letters told individuals that their debt was now officially abolished. Powell and Edelstyn now plan to destroy these debts in an explosion on 28 April. This isn’t a hoax. It’s the culmination of a year-long project to highlight the UK’s debt crisis.

Powell and Edelstyn opened HSCB in a former Co-Op Bank on Hoe Street in Walthamstow, London. Throughout 2018 they hosted “intensive weeks of money printing”. Instead of the queen, their notes feature local people and are called:

The ‘Gary’ (after Gary Nash, the founder of local foodbank ‘Eat or Heat’) the ‘Saira’ (after Saira Mir who, together with her family, set up a kitchen for the homeless called Pl84U-Al Suffa); the ‘Steve’ (featuring Stephen Barnabas who set up ‘The Soul Project’ for young people after his nephew was fatally stabbed); and the ‘Tracey’ (the headmistress of local Barn Croft Primary School).

Because these notes are also artworks, the project sold them to raise £40,000. Half this money went to support local community projects, they used the other half to buy more than £1.2m of local debts.

They were united “by a desire” to “rally against a system we felt had let us down”. As they explained to The Canary, their ‘rebel bank’ is:

A place to come together and discover the collective power of art, sharing and community action to defy the alienating power that financial capital has on all our lives.

Buying these debts exposes a huge corporate loophole. Across the UK, debts are sold to debt collection agencies for “less than their face value”. But having bought the debts, these agencies are “entitled to collect the full balance”. So HSCB registered with the Financial Conduct Authority as a debt agency and managed to buy “£1.2m of local high-interest debt for £20,000”.

In a press release, Powell said:

If banks can create their own money at the click of a button, why can’t we? Rather than using it to profit though, our idea was to use it to help those most affected by the fall out of our unequal debt based economy.

Powell and Edelstyn point out that this project “isn’t a hack that can be used to fix the entire system”. But rather it’s:

a stunt that draws people into the story of debt, and teaches them about the secondary market, perhaps empowering them in the future to have a different conversation with creditors who ring them chasing them for debts that are in some sense purely imaginary.

They got the idea of debt abolition from Strike Debt in New York, which raised $701,317 and erased over $30m of student and medical debt.

The UK’s debt crisis is spiralling. In 2018, UK individuals owed nearly £1.6tn. A report from the National Audit Office established that “8.3 million people in the UK are unable to pay off debts or household bills”. As Powell and Edelstyn also noted:

Between 2012 and 2017 unsecured credit increased by 19 per cent, student debt doubled to £100 billion, and Council Tax Arrears increased by 12 per cent. These data are symptoms of a creditor class gone wild.

Debt has been spiralling since the financial crash in 2008. Following Gordon Brown’s emergency bailouts, the British taxpayer bought £45bn of shares in the Royal Bank of Scotland and over £20bn in Lloyds. Powell and Edelstyn explain that although “the public owned the lion’s share of these banks” there was no thought for the “wellbeing of the population” or any “transformation of the banking system” in the sell-off of these debts. Instead, it was used as the basis for austerity. And, as they point out:

Ten years of austerity – allegedly to balance the national books – have left the poorest even worse off than before.

Above all else, Bank Job is a community project. The team involved all “have personal stories” about the ways “debt touches” lives. But ultimately the project gave hope:

that communities can be resilient and will fight together – that we owe it to one another to shape the sort of world which our children can inherit with confidence and pride. The feeling that we’re not alone – or as Strike Debt said ‘we’re not a loan’. That we can get together and create value that transcends the traditional creditor / debtor relationships and forces that are ripping our communities apart across Britain.

And the project also allowed those involved “to imagine that the world we want is not just some vague far-off dream”. It gave hope that this can “be achieved in the here and now”. Groups coming together “to take control” and finding ways to “rewrite the rules” is a powerful vision. As Powell and Edelstyn said:

If you can get hold of the money supply, you have infinite power. That is what this is really about. It’s about taking power back for ourselves to choose the sorts of lives we feel are useful.

Already, large numbers of people in Walthamstow know that Bank Job has bought and written off their debt. When that debt goes bang on 28 April, it will send out a powerful message to banks and credit companies everywhere. In the face of corporate greed, people are rising up. So let’s hope that this is just the start.