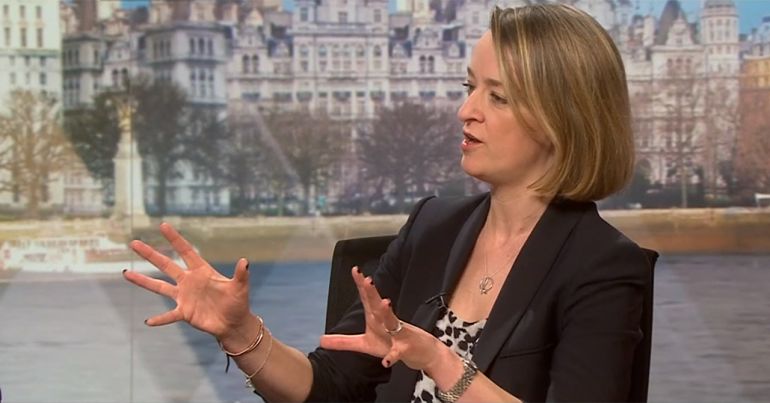 On 25 March, parliament voted to take back control of the ongoing Brexit chaos. Meanwhile, Laura Kuenssberg – the BBC‘s supposedly impartial political editor – sent out two tweets which some people felt betrayed dangerous casual racism. She reported that some hardline Brexiteers ‘informally’ use the name ‘Grand Wizards’. This term has also been used by the Ku Klux Klan since the 19th century.

Theresa May summoned key hardline Brexiteers to Chequers for crisis talks on 24 March. Those invited included Boris Johnson, Michael Gove, and Jacob Rees-Mogg. This came amid rumours of a coup to topple May.

Kuenssberg announced that this group – apparently known as “The Grand Wizards” – met again on 25 March:

2. The 'Grand Wizards' (the new name for the Chequer's daytrippers apparently) also had another meeting this morning, were they discussed again whether they could get on board to back PM's deal and there was no firm conclusion

Grand wizard is a name widely associated with the white supremacist Ku Klux Klan. The term was first established in 1867. So with over 150 years of history in between, there’s nothing obscure about this link.

But instead of issuing any kind of acknowledgement, or apology, Kuenssberg sent another tweet. This time, she seemed to imply ‘it’s all OK’ because it’s just an ‘informal nickname’:

just catching up on timeline, for avoidance of doubt, couple of insiders told me using the nickname informally, no intended connection to anything else

Needless to say, the situation provoked outrage and anger. As Labour’s Dawn Butler noted, such language has no place in modern politics:

On the 212th anniversary of the abolition of the slave trade and 7 days since The International Day for the Elimination of Racial Discrimination it’s remarkable that a group of senior Tories have allowed themselves to be named after leaders of the Klu Klux Klan https://t.co/vfnY4RvvCd

Those involved are no strangers to racism. In 2013, Rees-Mogg spoke at a dinner for a group that called for Stephen Lawrence’s mother to ‘go home’. Johnson said that women wearing burqas or niqabs look like “letter boxes” or ‘bank robbers’. In fact, he’s made a string of racist comments passed off as ‘gaffes’. It’s also emerged that, in 2016, Gove allegedly said:

I feel rather like the grand wizard of the KKK giving an address to the AGM of Black Lives Matter.

As I’m sure he’s aware, the Ku Klux Klan is little more than a terrorist group who engaged in systematic murder, violence, and intimidation to protect white supremacy.

Street also said this “quip” was “beneath contempt”. And now, the term has surfaced again, passed off by Kuenssberg as ‘informal’. As Butler commented, this doesn’t seem to be a coincidence:

When someone shows you who they are, believe them the first time.

The hostile environment and the institutional racism is at the very top of this government. https://t.co/CiWRTbbq6N

Not convinced that calling themselves 'grand wizards' is coincidence. The hostile environment's ripples run ever wider and deeper. https://t.co/Q4amME369V

Labour’s David Lammy, meanwhile, pointed out that this same group is currently holding the UK “to ransom” over Brexit:

The United Kingdom is currently being held to ransom by a bunch of wild-eyed hard Brexiteers who have inherited the name used by the heads of the Ku Klux Klan. Wake me up when this nightmare ends. https://t.co/yJEyNCdBhp

It’s hard to determine whether Kuenssberg dropping the name so casually into a public forum is worse than her alleging it’s not an issue. Because, let’s not forget, she’s referring to the Conservative Party. This is the party responsible for the Windrush scandal, and the architects of the racist and damaging ‘hostile environment‘. Conservative MPs continue to make racist and Islamophobic comments. Yet calls led by Tory peer Sayeeda Warsi to investigate fully the “overwhelming evidence of Islamophobia” in the party go nowhere.

For a BBC journalist to throw such an abhorrent term with clear racist overtones into the discussion is unforgivable. So too is the fact that this is a name some MPs seem happy to use. That she still fails to see how problematic this is says it all.