As Gaza burns, the UK can't ignore its role in this crisis - Canary 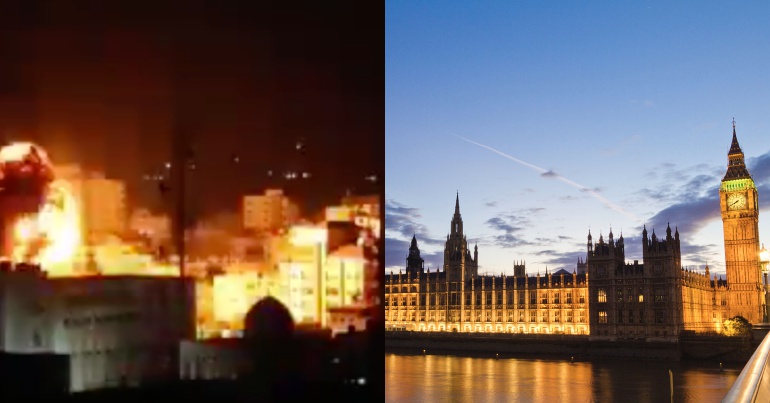 On 25 March, Israel launched an intensive attack on Gaza. As shocking images emerge of the bombardment, one thing is clear. The UK is complicit in this crisis.

The Palestine Solidarity Campaign (PSC) and other groups condemned these attacks. They called on the UK government to take action and “push for an immediate ceasefire in order to protect civilians”.

As PSC reported, Israeli forces claimed the “bombardment was a ‘response’ to a rocket launched from Gaza earlier on Monday”.

And as many people noted, the UK’s establishment media followed suit with biased coverage:

Israeli violence is always framed within a justifying context. It happens for a reason, a response to something.

Palestinian violence has no stated logic/rationale. Just irrational Arabs being violent. Because that's their nature.#GazaUnderAttack pic.twitter.com/vXOdNmG0L7

in the context of a 52 year long military occupation, and in the 12th year of an illegal siege that has created a man made humanitarian crisis so severe that the UN has stated that Gaza will not be fit for human habitation by 2020 unless it is lifted. The groups say they fear they are witnessing the launch of Israel’s 4th major assault on Gaza since 2009, likely to cause huge numbers of Palestinian casualties.

On 22 March, the United Nations Human Rights Council (UNHRC) condemned Israel’s “apparent intentional use of unlawful lethal and other excessive force” against civilian protesters in Gaza in 2018. Yet as The Canary reported, UK foreign secretary Jeremy Hunt abstained from this vote.

People on the ground in Gaza shared images of the attacks:

Other people on the ground pointed out that, during these attacks, there’s no shelter and nowhere to hide:

To those who tell us to "stay safe": I truly appreciate your support but:

1- #Gaza has no shelters.
2- I'm staying at home, what else can I do to stay safe?
3- Gaza is a highly populated condenced little space.
4- Most of us are unarmed.

What else can we do?#GazaUnderAttack

And when bombs fall, they fall on people who already face daily hardship under Israel’s brutal occupation:

~95% of water is unfit for drinking

~58% of youth are unemployed

~80% are reliant on international aid

And 100% are trapped under Israeli siege, occupation, and endless bombing campaigns. #GazaUnderAttack

Yet Netanyahu has already told pro-Israel lobbyists in the US that he’s “ready to order further action”.

The moment Israeli warplanes have bombed one of the most crowded areas in the world with F-16's missiles.

As Campaign Against Arms Trade (CAAT) has established, UK companies supply Israel with the components for these F-16 fighter aircraft.

What’s more, the UK also licensed record numbers of arms sales to Israel in 2017. According to CAAT, this was £221m in 2017, bringing the total to £340m since Israel’s 2014 bombing campaign in Gaza – which killed at least 1,483 Palestinian civilians. And UK arms licences to Israel since 2008 total £432m. Israel is now the “eighth largest market for UK arms companies”.

PSC has called for a day of action and mass protests on Saturday 30 March. PSC chair Kamel Hawwash said:

These bombings are a serious attack on the most densely populated area in the world and may well represent the beginning of a devastating assault on Gaza like the ones we saw in 2009, 2012 and 2014.  We call on the UK government to pressure Israel to end its attack to prevent further loss of civilian life.

Hawwash called for people to join the day of action “in solidarity with the Palestinian people”. “We must,” he said, “show that the people of Palestine are not alone.”

From UK arms sales to Hunt’s failure to recognise a UN report on “intentional” violence, our government plays a crucial role in this crisis.

Palestine, you are not alone. We stand with you, and we also demand that this vile UK government takes action.

Featured images via screengrab and Mdbeckwith/Wikimedia