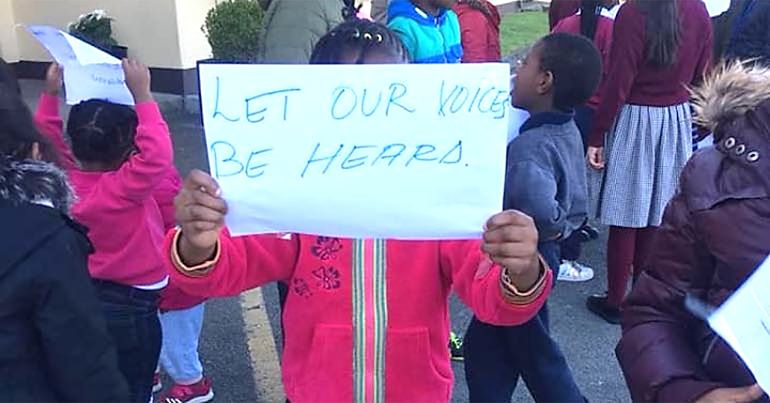 Asylum seekers in Ireland have staged a protest against their treatment by the Irish government. The protest took place in a direct provision centre in Clonakilty. David Stanton – the minister of state for equality, immigration and integration – visited the centre on 25 March. But the asylum seekers said they were “deceived” by those in charge of the centre because they were not told about the visit. Instead, they said the minister was given “a very false picture of life at the Lodge”.

The government puts asylum seekers in accommodation, known as direct provision, until they have decided the outcome of their applications. As The Canary previously reported, this system is controversial in Ireland.

The residents posted videos on Facebook explaining why they were protesting. One of them explained they were having a:

peaceful protest because we heard that the minister here yesterday and he did not see anyone. Or he refused to see anyone. Or was stopped from seeing anyone.

As a result, they were “demand[ing] to understand” why this happened. And to get some answers, they decided to protest by locking the management out of the building.

The residents then had a meeting with the managers of the centre. They told the management that they should have seen the minister while he was visiting. They argued:

it is not nice and it is not good for us to have such [a] calibre of man in our lodge and the residents do not have a one-on-one or even send one person, at least to represent them, to speak of the conditions and the needs of every resident that lives in this lodge

They said, “This is unfair”. The residents also pointed out that the minister was shown one of their rooms. In response, management said this was because the room was “clean”. But the asylum seekers said this room does not represent the reality of the situation. One resident asked a member of staff:

are you aware of the picture that you have painted to that minister, that that is how all the residents live in this lodge when you know… that there are some parents who live in the smaller room with two children. Why didn’t you send him to those rooms?

The Canary spoke to the Movement of Asylum Seekers in Ireland (MASI) about the protest. It said the protesters have “our full support”. MASI pointed out that “residents were deprived [of] the opportunity to even meet” the minister. It argued that:

We must understand that residents don’t just wake up and decide to take action, it’s something that has been going on for some time in that centre and many other centres in the country.

Asylum seekers ‘must be strong’

MASI also said the management in direct provision centres “disregard people and ignore them for a long time”; and eventually:

There come[s] a time where people get tired of being shut down and refused to be listened to.

Because of this, MASI stated that the residents “must be strong and make sure that their demands are fully met before they call off the strike”. It added that direct provision and management “don’t make it easy for the residents at all”.