Jacob Rees-Mogg, the European far right, and the Christchurch terrorist - The Canary 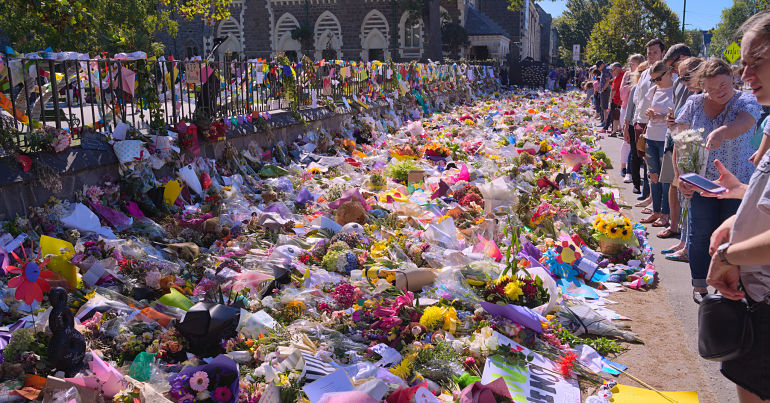 A past indiscretion may come back to haunt Conservative MP Jacob Rees-Mogg. Because his attendance at a certain event organised by an arch-conservative group links him with leading far-right ‘identitarian’ Martin Sellner.

Austrian police recently raided Sellner’s house after it was shown that he’d received money from the man believed to have perpetrated the Christchurch mosque killings that saw 50 people murdered.

This comes only days after a meeting at Chequers with UK prime minister Theresa May by arch-Brexiters, including Rees-Mogg, who reportedly described themselves as “Grand Wizards” – a phrase more commonly ascribed to the US white supremacists of the Ku Klux Klan (KKK).

The alleged Australian perpetrator of the Christchurch massacres has been charged with murder. He boasted a range of influential links. These reportedly included far-right Canadian conspiracist Lauren Southern and former KKK grand wizard David Duke, as well as the far right of Eastern Europe. The killer’s own country of Australia also boasts a large number of neo-fascist groups.

Eastern European far-right proponent Sellner is currently under investigation after it was discovered that he’d received €1,500 via an email address attributed to the killer. Sellner has denied any connection with the Christchurch terror attack and insists he will donate the money he received from the killer to the victims.

However, Sellner said he and his Austrian Generation Identity (or Identitäre Bewegung Österreich) will continue to fight against the ‘great replacement’. This term happens to be the title of the killer’s manifesto and refers to what identitarians claim is the ‘gradual takeover of Europe by Muslims’. Generation Identity has groups in many countries, including the UK.

In March 2018, Sellner, Southern and Brittany Pettibone were refused entry into the UK.

According to anti-racism group Hope Not Hate, one of the speakers at the Traditional Britain Group‘s (TBG) 2017 annual conference was Sellner.

Just a few years earlier, in 2013, white nationalist Richard Spencer was one of the speakers at that same event. Here is a video of his speech. (Spencer infamously went on to promote the 2017 “Unite the Right” rally, which attracted Nazis, KKK supporters and other white supremacists, prior to the clashes at Charlottesville.)

During the dinner, TBG vice-president Gregory Lauder-Frost is reported by an undercover Hope Not Hate researcher as saying that all non-whites should be deported to their “natural homelands”. Lauder-Frost is the former political secretary of the Monday Club, which advocates the repatriation of immigrants.

The guest of honour at the dinner was Rees-Mogg. (A video of his speech was removed from YouTube on 2 February 2018.)

Some years later, on 30 January 2018, Rees-Mogg expressed his ‘regret’ for speaking at the above TBG event, saying:

I deeply regret going to that [TBG] dinner. It was a mistake.

But the fact that Rees-Mogg even contemplated accepting an invitation to attend as guest of honour at the TBG event in the first place speaks volumes about his political nous, let alone his character.

Regrets aside, it’s all about the company you keep.