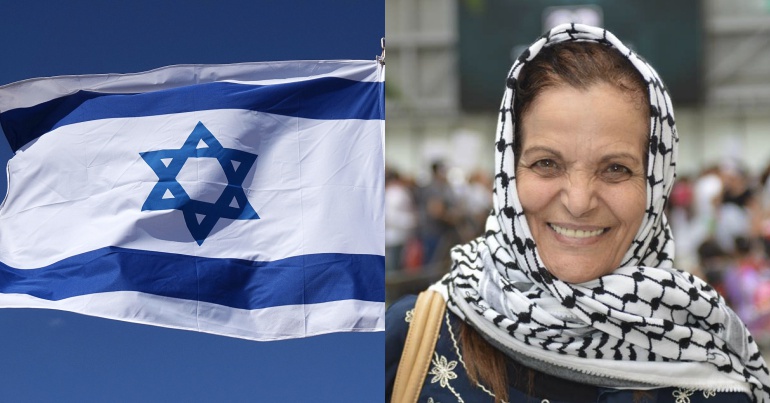 German officials revoked a Palestinian activist’s visa and refused to let her speak at an International Women’s Day (IWD) event in Berlin. The Israeli government has taken credit for this action, claiming it applied pressure on German officials.

On 15 March, Rasmea Odeh was due to speak at an event called Palestinian women in the liberation struggle. This talk was organised by the Samidoun Palestinian Prisoner Solidarity Network to celebrate IWD. Dareen Tatour, a Palestinian poet with Israeli citizenship, was also due to speak at the event.

As Electronic Intifada reported, officials surrounded Odeh outside the venue, gave her “a document from the Berlin Senate”, and told her to leave. This document was a “26-page report” that:

claimed her appearance could endanger Germany’s relationship with Israel and threaten peaceful coexistence. It also referred to BDS Berlin, the event co-host, as an “anti-Semitic coalition.”

BDS is the Boycott, Divestment and Sanctions movement. This is a “Palestinian-led movement for freedom, justice and equality”. Samidoun noted that Odeh:

is a lifelong struggler for Palestine, a community organizer of hundreds of Palestinian women and a transnational feminist who has received awards for her groundbreaking organizing work and support.

“Attack on freedom of speech”

In a press release, Odeh’s support group said she now faces deportation. Without her two-year Schengen visa, Odeh can’t give talks in other European Schengen countries. Her supporters said:

Gilad Erdan, Israeli Minister for Strategic Affairs, claimed credit for the decision taken by German authorities to revoke Odeh’s Schengen Visa. Once again, Israeli officials have exerted their influence on Germany in order to prevent public criticism of its human rights abuses.

According to Israeli newspaper Haaretz, a statement from Erdan claimed this decision was made “thanks to” his pressure. He also claimed pressure came from “a slew of Jewish organizations in Germany, as well as protest by the Israeli ambassador in Germany”.

was involved in a bombing attack in Jerusalem that killed two Israeli students in 1969. She was released by Israel in 1979 as part of a prisoner exchange. Odeh later moved to the United States and was deported to Jordan in 2017.

In 1969, Odeh did sign a confession “for alleged involvement” in the bomb attacks. But she signed this after 25 days in prison where she says she was “raped and tortured by Israeli soldiers”. In 1979, she testified about this to a UN special committee. As Electronic Intifada noted:

Despite the evidence, media outlets continue to refer to Odeh as a “terrorist,” often failing to mention the torture conditions under which her confession was made, or the 1977 Sunday Times investigative piece which brought her story to light

Odeh, Tatour, and the event organisers said in a press release that they “strictly reject all forms of violence, anti-Semitism, racism and sexism”. Odeh’s attorney Nadija Samour, meanwhile, called “an urgent hearing” at the Berlin Administrative Court to fight the deportation. Samour said:

Cancelling a visa based on what has happened so far in the past is a completely new concept from a legal point of view, especially as it is based on a confession condemned even by the Special Committee to Investigate Israeli Practices Affecting the Human Rights of the Population of the Occupied Territories.

This attack on freedom of speech and association, basic rights enshrined in the German constitution, marks a new low in the targeting of Palestinian activists and BDS supporters in Germany and could set a legal precedent, if successful.