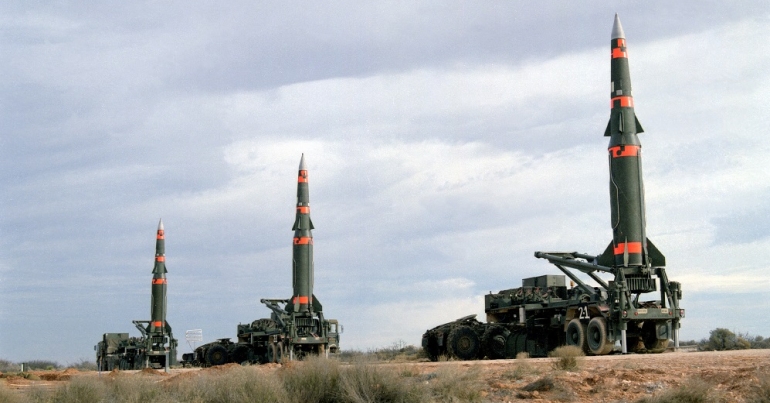 On 2 August, Donald Trump’s government officially withdrew from the landmark Intermediate-Range Nuclear Forces (INF) Treaty. US scientists warned that this decision would bring the world closer to a “doomsday scenario”. And now, former US colonel Lawrence Wilkerson has spoken exclusively to The Canary about how “illogical”, “idiotic” and “extremely dangerous” this turn of events is.

Wilkerson served in three separate Republican administrations – those of Ronald Reagan, George H W Bush, and George W Bush. And he has spent nearly two decades working on national security issues within the military, government, and in civilian life.

Russia’s violations provoked by US aggression and expansionism

The INF Treaty banned an entire class of missiles and reduced nuclear-capable stockpiles in both countries by 2,692 “short-, medium-, and intermediate-range missiles”.

Wilkerson lamented the collapse of the treaty as “indicative of the adverse change in global leadership occasioned by the end of the Cold War, from Moscow to Washington”. And he confirmed that, in his view, the Russian government had certainly violated the INF Treaty. But he also painted a wider context largely ignored by the corporate media.

He noted in particular that both the US and Russia “are violating – and now abrogating – the treaty ostensibly because the other provoked them to do so”. And he said:

Russia has, in fear of a NATO advantage in precision-guided munitions (PGMs), decided to make it established military doctrine to use small-yield, so-called ‘tactical’ nuclear weapons to offset that advantage and blunt the nose of a NATO invasion of its territories.

Russia needed to violate the INF Treaty to develop and position the appropriate weapons. But this move is a direct reaction to NATO’s much more bellicose attitude toward Moscow since Putin’s rise to power. Part of this more bellicose attitude was incorporation of former Warsaw Pact nations into NATO, deployment of [Ballistic Missile Defense] to Central Europe, and stationing of US troops and assets on these countries’  territories.

In other words, while “both parties are guilty of provocative policies”, he emphasised that “no one has been more provocative than Washington”.

US ‘provocations’ by expanding NATO

In 1998, George Kennan – the architect of US ‘containment policy’ against the USSR – blasted Washington’s initial decision to expand NATO as a “tragic mistake”. In a highly prescient interview, he told the New York Times that “Russians will gradually react quite adversely and it will affect their policies”, and that NATO expansion would mark the “beginning of a new cold war”. The US also took this decision despite a “cascade of assurances” from the George H W Bush administration that, in exchange for the USSR allowing East Germany to unify with West Germany, NATO would move “not one inch eastward”. Since then, NATO has expanded multiple times and now borders Russia, with 29 members. Washington’s backing of the 2014 coup in Ukraine was simply the latest provocation to place the West in confrontation with Russia.

US dismantling the ‘deterrence’ of ‘mutually assured destruction’

Russian president Vladimir Putin also blamed the decision of George W Bush’s government, in 2002, to withdraw from another landmark nuclear agreement – the Anti-Ballistic Missile (ABM) Treaty. The ABM Treaty was designed to ensure neither the USSR nor the US would be able to defend themselves against a nuclear strike. This would ensure that a nuclear strike by one country would guarantee a nuclear response by the other. The result would be ‘mutually assured destruction’ of both. John Bolton, Trump’s current national security adviser, was also a member of George W Bush’s administration, and helped to kill the ABM Treaty.

In 2018, even US brigadier general Kevin Ryan, a former chief of staff for the US Army’s Space and Missile Defense Command, acknowledged that Russia has legitimate concerns which the US must address. New technologies mean that the US may be violating the “spirit” of the INF Treaty even if it doesn’t technically violate the language, according to Ryan.

“Killing the treaty is the wrong move”

Regardless of who violated the INF, the Trump administration’s decision to kill the treaty is the wrong move…

The bottom line is this: when someone breaks the law, you shouldn’t throw away the law. By doing so, you remove any chance to hold the violator accountable for their actions. If the ultimate goal is to coax or coerce Russia back into compliance with the treaty, then killing the treaty itself obviously won’t achieve that. Instead, it legally frees Russia to deploy even more INF missiles.

The decision to withdraw wasn’t based on long-term strategic thinking but appears to have been based on ideology. It was apparently the product of National Security Advisor John Bolton––a hawkish “serial arms control killer”––having the President’s ear.

In a review on the “rising nuclear risk”, a UK House of Lords committee concluded that:

The world is dangerously close to an era without arms control, which would increase the risk of nuclear use. We urge the [UK] Government to support initiatives, including trust and confidence building measures, to achieve new arms control agreements in the context of a more multipolar world.

This view is shared by FAS, the Stockholm International Peace Research Institute, and the Bulletin of Atomic Scientists.

A positive development would be for the US and Russia to agree to extend the New START Treaty, due to expire in 2021. But that may not be so simple: firstly, because Bolton appears uninterested in extending New START; and secondly, as readers will see in part two of this analysis in the coming days, because the US is also motivated by a desire to ‘contain’ China.

This is part 1 of a 2-part analysis of the end of nuclear weapons treaties. Part 2 focuses on the role played by Washington’s China policy.