A 'doomsday' scenario is now far more likely due to US withdrawal from nuclear treaty, say experts - The Canary 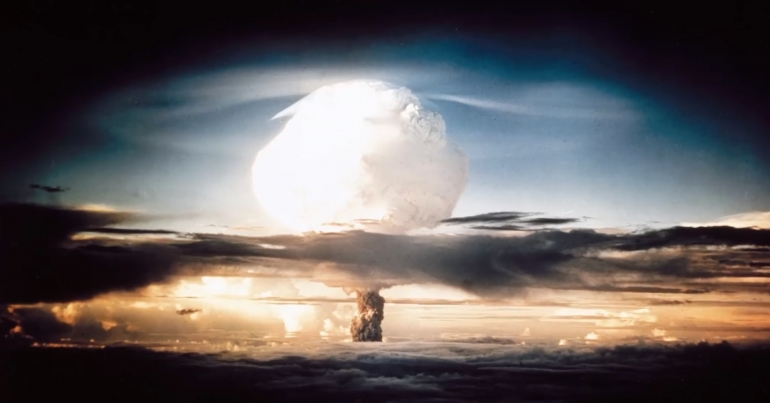 The world is closer to nuclear war because of Trump’s decision to withdraw from the Intermediate-Range Nuclear Forces (INF) Treaty, say experts. The Bulletin of the Atomic Scientists has already placed its “doomsday clock” to “2 minutes before midnight”, the closest it has been to ‘midnight’ since the 1950s. The last time the clock was this close to ‘doomsday’ was in 1953, during the Korean War. At that point both the US and the Soviet Union openly tested nuclear bombs.

The INF Treaty was signed between Ronald Reagan and Mikhail Gorbachev in December 1987.

According to TIME Magazine:

The treaty forced the superpowers to scrap more than 2,600 missiles with ranges 310 to 3,420 miles — weapons considered destabilizing to the European continent because of their capability to launch a nuclear strike from anywhere without early warning.

In its 2018 report, the Stockholm International Peace Research Institute (SIPRI) estimates that Russia and the US account for almost 92% of all nuclear weapons.

‘We need to talk’

Both Russia and the United States have accused each other of violating the INF. Yet neither country has provided sufficient evidence to the international community to either counter the other’s allegations or prove their own accusations.

Former US Colonel Lawrence Wilkerson who worked in the Reagan, Bush I and Bush II administrations told the Real News Network that even if the Russians have violated the INF:

… this is not the way to deal with this. We need to sit down, we need to talk. We need to try to preserve these things that we’ve created, treaties, to curb nuclear weapons in the world, rather than starting another conflict. So I’m very saddened to see what Trump is doing here. It’s just another indication that this administration is withdrawing from the world, or at least withdrawing from those aspects of the world that blood and treasure has been spent by Americans since 1945 to build and maintain.

Part of a dangerous build-up

The director of SIPRI warned that the INF withdrawal is part of a “crumbling architecture of arms control”. As physicist and policy expert Zia Mian recently wrote:

at the end of 2001 the United States walked out of the Anti-Ballistic Missile (ABM) Treaty it had signed with the Soviet Union in 1972.

He also noted that:

In 1985 we had about 70,000 nuclear weapons in the world with a destructive equivalent of approximately 1.5 million Hiroshima bombs…We had enough weapons to destroy the world over many times. Then we stepped back from the brink…

But Kuznick warns that US withdrawals from multiple nuclear agreements now means that:

We are in danger of going back to where we were in the 1980s.

We must do better

Whatever the justification, the United States has unilaterally withdrawn from yet another fundamental nuclear arms control treaty. There may be those who believe this decision to be irrelevant because they see Trump as a ‘Putin puppet’. But many respected military and civilian experts, in foreign policy and nuclear weapons, clearly don’t agree.

– Learn about the work for the Campaign for Nuclear Disarmament.