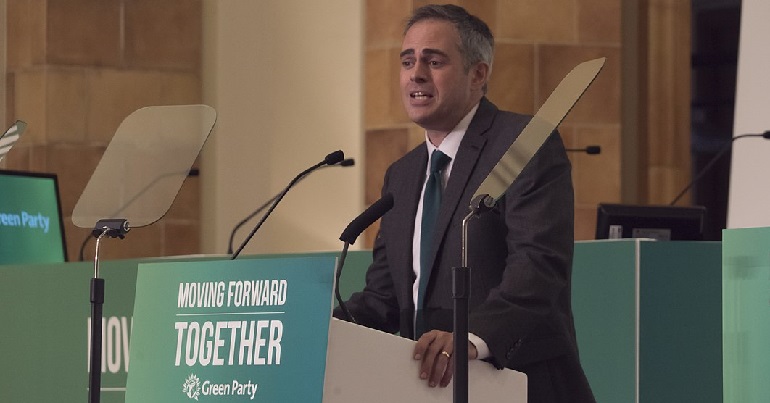 On 29 October, Philip Hammond will announce the latest budget. And in the run-up, the Green Party has issued a list of “emergency” demands to the government.

The party has called on the government to stop funding environmentally damaging projects. It has also called on Hammond to “reprogramme the economy” by investing in renewable energy.

The Green Party has put forward a series of government policies and projects it wants to see scrapped. These include fracking, expansion of Heathrow airport, and the new nuclear power plant at Hinkley Point C. The party has also called on the government to end subsidies for fossil fuels and instead invest in renewables.

Its co-leader Jonathan Bartley says that an “emergency budget for the climate” is needed. He claims:

The last two Budgets failed to mention climate change. This is the Chancellor’s clear opportunity to stop bankrolling climate destruction and reprogramme the economy so it works for all of us by investing in clean renewable energy.

If the Government spends a single pound on climate wrecking projects the Autumn Budget will have failed.

In the wake of the UN’s warning that we are on the brink of complete climate breakdown the Chancellor must deliver nothing short of an emergency Budget for the climate.

These demands come in the aftermath of the Intergovernmental Panel on Climate Change’s report which warned there are just 12 years left for action to be taken to prevent catastrophic climate change.

The government’s environmental policies are currently under increased scrutiny. Earlier this week, earthquakes were detected after fracking began in Lancashire. This came shortly after Friends of the Earth submitted a petition of more than 300,000 signatures opposed to fracking companies being allowed to drill without the consent of local government and communities.

But it isn’t just fracking that has been under scrutiny. New evidence has also raised questions on the effectiveness of the government’s protection for coastal communities in the face of rising sea levels. And earlier in October, Greenpeace accused the government of a “monumental letdown” on wildlife protection.

The Green Party isn’t the only party demanding changes in the budget. The Labour Party has called for the government to take “large scale action” to end austerity. Labour’s shadow chancellor, John McDonnell said:

We need to see large scale action in this Budget to end austerity, not some vague promises for the future or a few financial conjuring tricks… Our schools, councils and social care system are crying out for investment. If austerity is really over, it is time for Philip Hammond to stump up the cash.

This position is popular with the public. A recent opinion poll found that the majority of people, including 80% of Conservative voters, want to see increased investment in public services in the budget.

The Green Party’s demands around climate change are also popular. A poll commissioned by Client Earth earlier this year found that 62% of people in the UK want to see the government taking more action on climate change.