As police apprehend suspect in mail bomb incidents, we should remember Trump's own incitements to violence - Canary 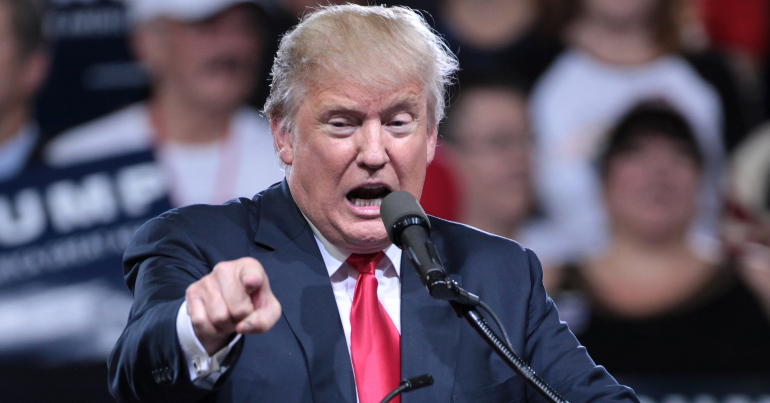 News of a series of mail bombs sent to critics of US President Donald Trump has been dominating the US’s headlines this week. Certainly, Trump can’t be held directly responsible for the actions of all of his supporters. But nonetheless, he laid the conditions in which violence against political opponents could arise.

A 56-year-old man from Florida, Cesar Sayoc, has been arrested on suspicion of committing the crimes. All 13 of the packages failed to explode.

Trump’s response to the incidents has been erratic. At first, he called for a more “civil tone” in public discourse, only to later himself blurt out characteristically insensitive and juvenile remarks. In spite of the initial laudable sentiments, critics were quick to point out the deep hypocrisy given Trump’s prior behavior.

Of course, Trump is not directly responsible for what has happened. But he has created a climate of hostility in which this kind of extremism easily takes root. On multiple occasions, he has legitimized and even encouraged violence against political opponents.

The trend began before he was even elected to the presidency. On the campaign trail in 2016, he said of a protester who disrupted one of his rallies that he would like to “punch him in the face”. He added that “in the old days” protesters would be “carried out in stretchers”. Just weeks before, he had boasted that he could “shoot somebody” and still not lose any voters.

There were also some cases of thinly-veiled encouragement for supporters to use violence. In August 2016, he was widely believed to have implied that gun owners should take the law into their own hands against his then-Democratic Party opponent Hilary Clinton in the case of him losing the election.

Once he was in office, things didn’t get any better. Earlier this month, Trump praised a Republican congressman who had assaulted a journalist. Greg Gianforte, who represents the state of Montana, ‘body slammed‘ Guardian reporter Ben Jacobs in 2017.

This kind of rhetoric lends legitimacy to extremists who are willing to use violence for political purposes. But there is something deeper going on here. Though few politicians refrain from personal attacks and stick exclusively to matters of policy, Trump goes well beyond the kind mudslinging that has taken place previously in US politics. Rather, he paints his adversaries as dangerous, conniving villains who are involved in a vast conspiracy to destroy American sovereignty.

In other words, according to the Trumpian narrative, they are not just political opponents but enemies of the country and its people. And now, after Trump has been spinning this tale to his supporters, someone has taken extreme and rash action against them.

– See other articles about Donald Trump at The Canary Global. Also, visit our Facebook and Twitter pages for more of our international coverage.