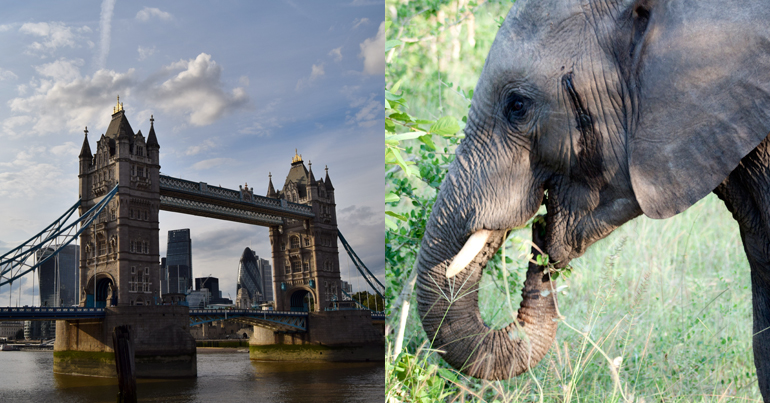 A group of conservationists, cross-party politicians, and celebrities will stage a protest at the Botswana embassy in London on 29 October. The protest will demand an end to the country’s controversial plans to allow the trophy hunting of elephants. It will also call for an end to international trophy hunting.

A surge in poaching

Botswana is home to the world’s largest population of elephants. It imposed a ban on trophy hunting in 2014. In addition, under the former president, Ian Khama, Botswana had pursued a zero-tolerance approach to poaching. The country implemented a “shoot-to-kill” policy regarding poachers and armed anti-poaching rangers. However, Mokgweetsi Masisi – Khama’s successor – has shown less regard for the welfare of the countries elephant population. Soon after taking power, he withdrew weapons from the Department of Wildlife and National Parks (DWNP) with no justification provided.

Masisi disarmed anti-poaching rangers in May. Since then, there’s been a surge in poaching incidents. During a recent survey, Elephants without Borders and the DWNP found 90 slaughtered elephants in just two months.

Despite the timing of the poaching spree, Masisi has branded concerns as “nothing but hysteria”. The government also questioned the accuracy of the survey. In a press release, the government argued that the elephant deaths were not necessarily the result of poaching.

The poaching spree is not the only cause for concern. On 21 June, the Botswana parliament passed a motion to reconsider the blanket ban on trophy hunting. Masisi has expressed support for the motion. Botswana politicians claim that the move is designed to address concerns by local farmers who are frustrated by elephant raids on farm crops. However, scientists working for Elephants Without Borders have questioned these claims. They point out that, due to various factors, reintroducing elephant hunting will have little impact on raids.

The protest at the Botswana embassy will also coincide with the launch of a new campaign to end all trophy hunting. In a press release campaigners said a ban is necessary:

With its population dwindling and increasingly scattered, the impact of trophy hunting could be disastrous and possibly contribute to the extinction of the elephant. This would be a major global conservation disaster, potentially the worst in living memory.

Sir Ranulph Fiennes, Bill Oddie, Peter Egan, and a cross-party group of MPs will join the protest. They will also hand in a petition signed by almost 250,000 people. The protest will take place at the Botswana High Commission in London at 3:30pm on 29 October.

Botswana was until recently one of the last remaining safe havens for wild elephants. It is vital that the Botswana government maintain and strengthen its protections of these animals.

– Sign the petition to keep the ban against elephant hunting.