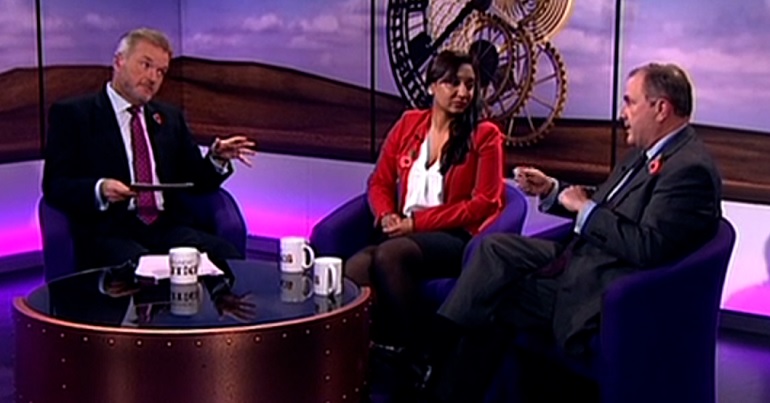 In September, the National Audit Office estimated that 8.3 million people in the UK are unable to pay their debt or household bills. One Conservative MP – Simon Hoare – has a solution for this. And it’s so ridiculous that even a BBC presenter mocked him for it.

Appearing on the BBC’s Sunday Politics South, Hoare suggested that a solution to people’s debt was to teach them “creative” maths. He said:

I think there are certain things that could be done. I think we could be a little bit more creative in how maths is taught in schools, to make it more of a management of the household budget. I think that would help.

After Hoare’s contribution, presenter Peter Henley could be heard scoffing. Henley then went on to ridicule Hoare’s argument:

There will be a lot of people watching this programme on zero-hours or on low incomes who haven’t had their universal credit who will say: ‘I just saw that Conservative MP saying, ‘Oh, the schools ought to teach maths better”. They’ll feel insulted.

But it wasn’t just the presenter who attacked Hoare’s response. Southampton Labour Councillor Satvir Kaur also slammed it. She highlighted the lack of government action on personal debt:

What you can be doing instead, actually, is going to the root causes and investing in them, which you’re absolutely not. There’s no regulation, there’s a lack of regulation in lending. Universal Credit is not working. And actually, you talk about wages going up, but in the last 10 years… in real terms, [they’re] £800 less. It’s just not good enough.

Problems with personal debt in the UK aren’t new. In 2017, the Trades Union Congress (TUC) found that unsecured debt as a share of household income was at its highest point for eight years. The TUC also pinpointed wage stagnation and lack of investment from the government as a cause. TUC general secretary Frances O’Grady identified changes that could be made to government policy to help stop problem debt:

Public sector workers who have suffered severe cuts to their real pay since 2010 are long overdue a decent pay rise. The minimum wage needs to keep rising so the lowest paid workers can keep up with rising prices. And a major programme of public investment in rail, roads, new homes and clean energy could be targeted at communities where decent jobs are in short supply.

The TUC isn’t alone in blaming the government for rising personal debt. Earlier in October, Labour’s shadow chief secretary to the Treasury Peter Dowd argued that austerity was at the heart of the issue. He said:

Eight years of austerity have pushed families into worryingly high levels of household debt. This report exposes the Government’s lack of effective action to tackle the scourge of debt and support families.

The impact of debt

Large amounts of debt can have a severe impact on people and their lives. In 2017, the Trussell Trust – an organisation that provides a national network of food banks – found that a third of people referred to food banks had difficulty with debt. Meanwhile, a study from the Glasgow Centre for Population Health linked debt to mental health issues such as depression and anxiety. Debt is also known to be one of the many factors that can lead to homelessness.

The scale of the UK’s personal debt problem is huge. And it’s having a real impact on many people’s lives. Given that, it’s unlikely that a few “creative” maths lessons are going to tackle the problem.