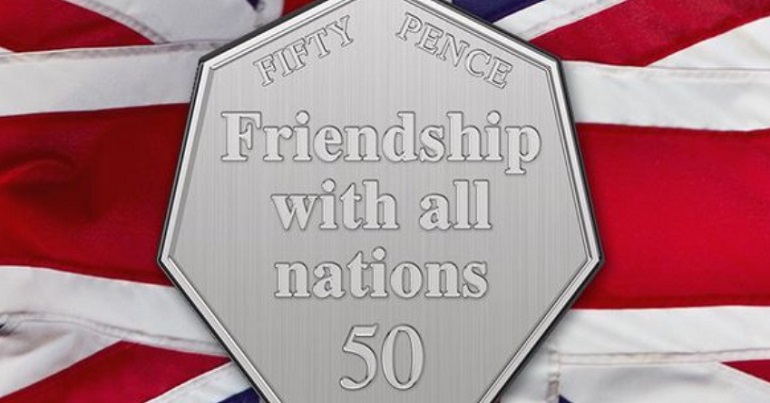 If Brexit wasn’t already contentious enough, chancellor Philip Hammond just played a budget-blinder in dividing the country even more. Because it’s been reported that he’s signed off on a commemorative 50p piece to celebrate leaving the EU. Cue Twitter to sum up the nation’s thoughts.

In a thinly-veiled attempt to sell the Tories’ Brexit shambles as a success story, Hammond will now be plastering the omnishambles on coinage for all eternity:

*Absolutely no self-awareness of how this will get him ridiculed*https://t.co/lBTmyPpZUh

As the Mirror reported:

The coin would be available from March 29 – the day the UK leaves the EU – and carry the words ‘Friendship With All Nations’.

If the coin is anything to go by, the government has obviously made amends with Russia and North Korea. Or Brexit friendship won’t be extending to them. So, maybe there should be a disclaimer on the coin stating this. Along with a line about ‘possible friendship with Saudi Arabia, depending on whom its executed this week’.

Some were taking it all very seriously:

What's the point of the brexit 50p coin? What on Earth does it achieve? The Tories would rather come up with pointless ideas like this than actually do a good job running the country it would appear.

Others were a bit more wry:

The UK government is to unvail a special brexit 50p coin. It will be worth 3 actual pence and engraved with famous brexit sayings like 'Fuck you remoaners' and 'stop saying we got tricked by a bus'

A glimpse of the new Brexit 50p coin. pic.twitter.com/VyDIpqRWwA

This may be a better option:

My pitch for what should be written on the back of the Brexit 50p pic.twitter.com/I6aiSdAhdA

But others thought it was positive:

A 50p coin was issued to mark Britain’s entry into the European Economic Community in 1973, as well as our 25th anniversary of joining in 1998.

It’s right and proper to celebrate our withdrawal and Britain embracing the world outside the EU racket. https://t.co/DffLP9E0fx

Will this 50p be the most sought-after coin ever minted? Who knows. But with some predicting an economic apocalypse after Brexit – 50p may well be worth diddly-squat in a year’s time, anyway:

Exciting news about the Brexit 50p with a first picture of what it looks like. pic.twitter.com/3ebbMA5SJl