It didn't take a Guardian contributor long to smear Jeremy Corbyn with the Pittsburgh massacre, live on Sky News - Canary 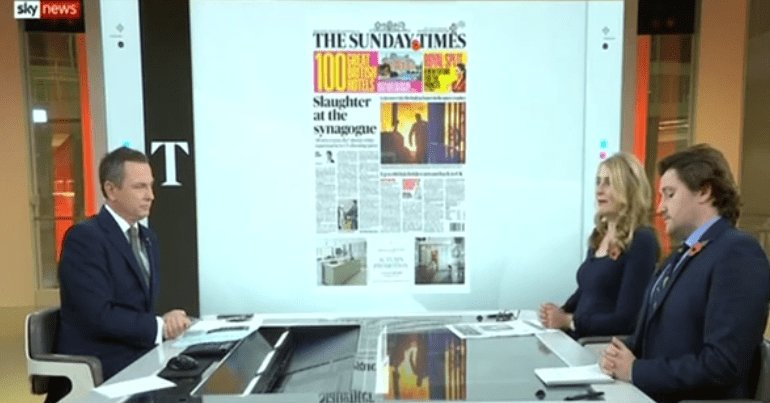 Correction: This article was changed at 17.10 on 31 October. It originally said Christina Patterson was a columnist at the Guardian. It has been changed to reflect the fact she is an occasional contributor for the publication, not a regular columnist.

During a discussion on a far-right white supremacist massacring 11 people at a Pittsburgh synagogue, writer for the Guardian and Sunday Times, Christina Patterson, accused Corbyn of “encouraging a climate” of antisemitism. Appearing live on Sky News on the same day as the attack, Patterson also likened Corbyn to Donald Trump, a president who has hired alleged white nationalists.

Given the topic of conversation, Patterson appeared to be arguing that Corbyn’s actions have partly led to this massacre.

I have to say in our own country, the Labour party has had a very heavy shadow of antisemitism hanging over it for much of this year… I know that Jeremy Corbyn and his colleagues have tried to say that it’s not a problem.

represents less than 0.1 per cent of Labour’s membership of more than half a million.

But there are plenty of people within the party and there’s plenty of evidence that it has been a significant problem… It’s a horrible shift in contemporary life… and we should be fighting it. Instead of which our leaders, Donald Trump as the leader of the Western world, and Jeremy Corbyn as leader of the Labour party have been encouraging a climate in which it has… become relatively normal.

Yet Corbyn has for decades signed parliamentary motions explicitly condemning antisemitism. Almost no Conservative politicians signed one motion in 2009 condemning “vile and anti-Semitic” content on the internet. Both Corbyn and shadow chancellor John McDonnell did.

Sky News effectively enables Patterson to link Corbyn to the Pittsburgh massacre. But that should come as no surprise. Research from the Media Reform Coalition shows “misleading”, “distorted”, and “inaccurate” reporting on Labour and antisemitism, across TV and online mainstream media coverage. The study, that academics at Goldsmiths carried out, found that out of 250 news items analysed in total, Sky News and ITN reported seven “misleading” news segments on the topic.

You honoured terrorists who castrated & murdered Jews in Munich.

And there are others on social media: 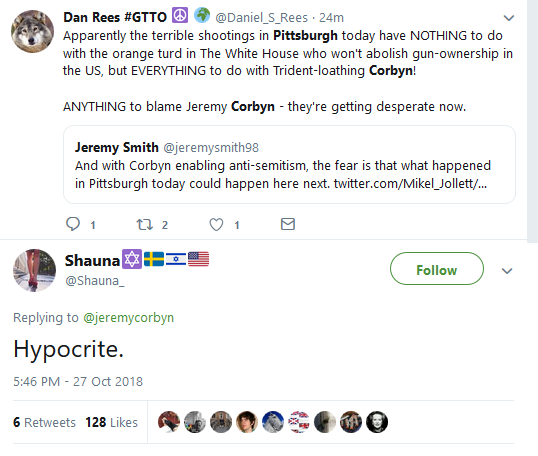 Jeremy Corbyn has spent his life opposing racism of all forms. Smearing him over the murder of 11 Jewish people at the hands of a white supremacist is abhorrent.