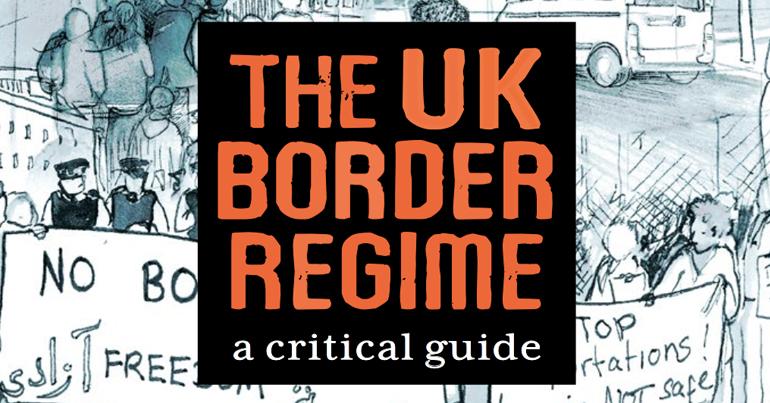 A new book sets a critical eye on the UK’s border policies and ‘hostile environment‘ for immigration. But it goes further. The book also offers guides on how to fight the “border regime”.

Corporate Watch, which has provided critical insight into the effects of capitalism since the 90s, published The UK Border Regime: A Critical Guide on 16 October. Over 300 pages, the book opens up Britain’s history of immigration control, the actors that operate it today, and how consent is manufactured. As Corporate Watch says:

The aim is to help understand the border regime, and ask how we can fight it effectively.

With this in mind, the group has made hard copies of the book freely available to asylum seekers and “other people without papers”. A digital version is also available to read for anyone with online access.

The book explores the UK’s hostility to migrants in a history extending back to 12th-century attacks on Jewish peoples. But it recognises modern border controls as having begun with the Aliens Act of 1905. This act is believed to have been aimed largely at controlling Jewish refugees from Eastern Europe.

Popular press of the time gave platforms to “racist pressure groups” and “politicians campaigning in the name of white working class constituents”. By doing so, the press built pressure that led to the passing of the act.

The guide points out that this mutual relationship between media and politics is as important today as it was then. Politicians see the media as having the “power to shape people’s future views”, the book says, so have created a ‘media-political ecosystem’. This means a “dense… ecosystem, where [politicians and the media] feed off each other in spinning and weaving their stories.”

It points to the close “collaboration” between Tony Blair’s Labour and Rupert Murdoch during the Sun‘s ‘asylum week‘ as just one example of how this has played out in recent times.

The 2017 accounts of GEO Group’s UK subsidiary suggests it makes a profit of up to 30% on the Dungavel contract. Internal G4S presentations show the company boasting of over 20% profit rates at Brook House, and even over 40% in one year at Tinsley House.

Meanwhile, the running of deportation flights is also mostly privatised. The book says Carlson Wagonlit Travel will be paid £5.7m for its current seven-year deal with the Home Office.

The UK Border Regime also looks at capitalist interests in shaping border policy. It points out that “Big Business is ‘pro immigration'” – insofar as it makes labour cheaper. But this ‘liberal’ attitude stretches only as far as migrants that can improve profits, it claims. Asylum seekers and illegal migrants, or “low value” migrants, are happily thrown under the bus as ‘Big Business’:

happily encourages politicians to launch spectacular attacks on ‘low value’ scapegoat groups. These attacks are profitable for some corporations, and don’t hurt the major labour flows relied on by many others.

“A nation of border cops”

The UK Border Regime also presents a deep dive into the physical control of the borders. This covers overt forces such as Immigration Compliance and Enforcement teams, detention centres and deportation flights. But also more hidden controls such as various anti-migration funding agreements between the UK, France and the EU.

Theresa May’s ‘hostile environment‘ has seeds in the 1999 Immigration and Asylum Act, the book says. It argues that when May as home secretary announced a “really hostile environment for illegal immigration” in 2012, the effect was to create “a nation of border cops”.

Corporate Watch says this “increase[d] the misery of migrants in the UK”. Moreover, it also had a negative impact on the country’s citizens. As The UK Border Regime explains:

By involving so many more citizens in the work of immigration enforcement, they tear at bonds of trust and solidarity in our neighbourhoods, workplaces, streets. They sow suspicion. They help make informing, surveillance, and big data gathering by the state and its corporate partners into a normal part of everyday life.

But this tearing at social solidarity by corporate, political and media elites has also led to fierce resistance. And The UK Border Regime says there’s “still all to play for”.

What we can do

The latter part of The UK Border Regime examines ways of fighting back against the hostile environment and border controls. It argues that:

the most effective struggles against the border regime have worked on a grassroots level, far from the political stage of elections, lobbying, and big media. … we can’t see any [examples] where politicians dropped tough immigration policies because they woke up one morning and decided to be nice.

Such grassroots efforts include the Stansted 15, Anti-Raids Network and Yarl’s Wood uprisings undertaken by detainees themselves.

Strategically, it suggests identifying lines from ‘weak points’ in the border regime to ‘openings’. Such openings are victories that not only breakthrough the regime but offer “potential to grow and spread”. For example:

networks of solidarity and safe passage helping people move freely across and within the territory … a school or hospital that refuses to enact hostile environment measures, a neighbourhood where raids are not welcome … strikes, prison rebellions, bursts of revolt.

No borders, no nations

Despite its length, there are some areas The UK Border Regime doesn’t cover. Corporate Watch is open about lack of detail concerning UK border frontiers apart from Calais. It also doesn’t cover UK collusion with the EU to create Fortress Europe or the relationship between border control and the global economy.

Similarly, this review is just a brief introduction to some of The UK Border Regime‘s key points.

The topic of migration isn’t going away, regardless of how Brexit turns out. Borders will harm people as long as borders exist. Understanding how these policies cut across many social struggles helps bring resistance together. And Corporate Watch has provided an essential handbook for helping people fight back against the UK’s brutal regime and the people that profit from it.

– Read The UK Border Regime and share it with those who may benefit from it most.

– Unlike some establishment media, The Canary will not collaborate with politicians to use migration as a tool for government policy. Please support us so we can remain fiercely independent.