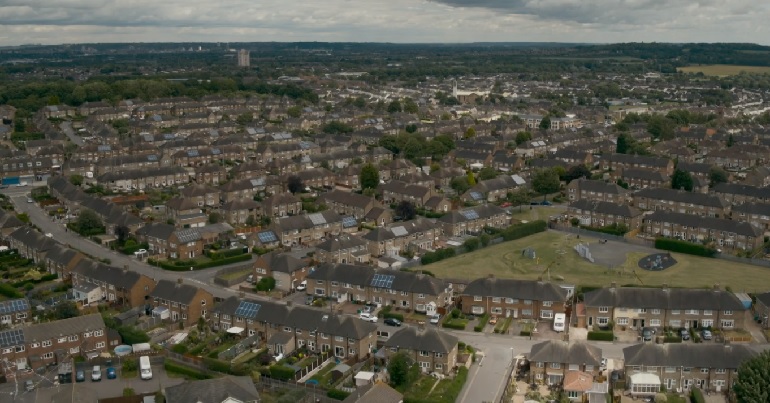 A short video from Friends of the Earth challenges us to rethink how Britain uses its land. And it could turn some people’s whole view of Britain upside down.

Not enough room in the UK?

Filmmaker and “guerrilla geographer” Dan Raven-Ellison wanted to show the UK in its “correct proportions”, with every second of the video representing “what 1% of the UK looks like from the air”. He says:

The video reveals that Britain dedicates about 27% of land to crops. And as Raven-Ellison explains:

One of the most shocking things… was realising that half of all the cereal crops you see in the countryside are fed to livestock.

What else could we do with that land?

Our last 28%… takes us through pastures. This – the single biggest use of land – is mostly used for feeding and rearing cows and sheep.

The global meat industry has roughly quadrupled since the 1960s. And as more people around the world eat meat, the business just keeps growing. No wonder conservation charity WWF has warned that increasing meat consumption is putting a massive strain on Earth’s resources, causing many species of animals to die off in the process.

Scientists studying the UK’s “land footprint” found that, in 2010, the area it used to make its food would have filled about 97.3% of the whole country (with animal products making up roughly 85% of the total footprint). But fortunately (for Britain, at least), 64% of the footprint for animal feed was in other countries. In short, if Britain didn’t use other countries’ land to feed the vast needs of the animal-related food industry, it would have no free land left.

This isn’t just about land use, though. It’s also about the world’s climate. Because some reports say the meat industry makes up at least half of the greenhouse gas emissions responsible for today’s global climate chaos, while playing a leading role in water waste and deforestation. And that’s not even mentioning animal rights, the benefits of eating less meat, or the disproportionate effect climate change has on the Earth’s poorest people (who hardly eat meat).

The video above will no doubt change many viewers’ perceptions about how Britain uses its land. But it also dares us all to think hard about what we could do with our land if we didn’t devote so much of it to the meat industry. And in a world facing an imminent climate disaster, this is one of the massive and urgent questions we need to be asking ourselves.

– Check out the numerous eye-opening documentaries out there talking about animal rights, diet-related illness, and the impact big business has on all of this.

– Contact your MP to urge them to support Divest Parliament; a campaign encouraging politicians to remove their pension investments from fossil fuel companies. Also, sign the Greenpeace ‘petition for a clean powered UK’.