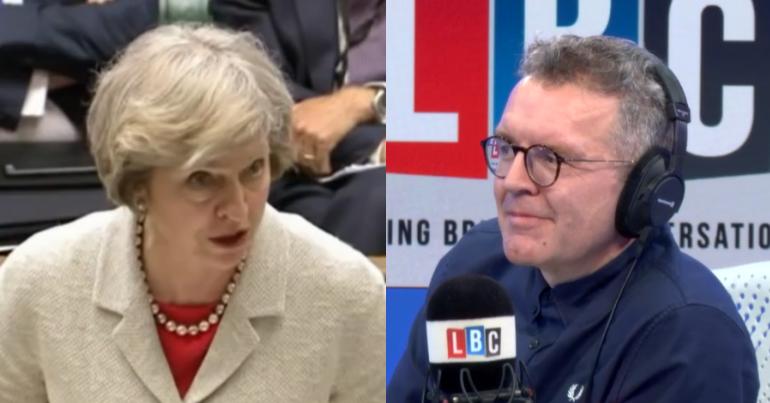 Labour’s deputy leader Tom Watson nailed his colours to the mast this week live on radio. Watson was asked on LBC if he would press the nuclear button as prime minister. With almost no hesitation, the Labour front-bencher confirmed he would do so.

This is exactly how Theresa May responded to the same question in 2016 when she proudly told the country she would launch a nuclear attack.

With Nigel Farage taking a week off from his usual LBC radio slot, Watson stepped in to cover the show. One caller, Tim, phoned in and complained about Jeremy Corbyn’s reluctance to get into a global nuclear conflict. He then posed the question to Watson:

If you were the leader of the Labour Party, and you was the prime minister of this country, would you press that button? Because that’s the only, one of the reasons I don’t vote Labour.

Watson replied, with barely a pause for thought:

The caller then thanked the Labour frontbencher, saying that “in that case, you’d get my vote”.

Both anti-nuclear activists and Labour members reacted with outrage at the comments. Campaign group CND responded on social media:

CND strongly condemns Deputy Labour Leader Tom Watson’s statement on @lbc that he would press the nuclear button if he were the UK’s Prime Minister. Nuclear weapons are immoral, obsolete and cost vast sums of money. They must be abolished before they obliterate us all.

Others called on the MP to apologise:

Tom Watson comments on LBC that he would press the nuclear button if he is Prime Minister are disgraceful and he must apologies. Many people across the world have lost loved ones due to war. Bombs and rockets have destroyed many homes. Some are British bombs.

Some also questioned his suitability for the role of deputy-leader:

Tom Watson isn't the sharpest knife is he? "I'd push the button"…Why? When?

There is no logical point at which a sane person would decide to commit mass murder & ritualistic suicide at the same time.

One of the many reasons we need a new deputy leader. #JC4PM

In contrast to this readiness to unleash nuclear warfare, Jeremy Corbyn was much more considered when repeatedly questioned on the subject before the 2017 general election. In the LBC phone in, Corbyn’s deputy made sure his own stance was crystal clear.

Willingness to engage in nuclear war appears to be a vote winner for some people, like Tim. As many pointed out though, it’s unlikely that we will find out if it would boost a Tom Watson PM bid:

Tom Watson says he would ‘press the nuclear button’ if he was PM?

Fair enough, it’s a bit like me saying I’d always stick penalties in the top right hand corner when I’m number 9 for England.

Neither is happening, next question.

Although it is a very worrying attitude, it is not an anomaly within the Labour party or among MPs in general. Only 0.16% of trade union delegates and 7.1% of Constituency Labour Party delegates backed a debate on Trident renewal in 2015. While over half of sitting Labour MPs voted in favour of renewal in 2016.

We can only hope the Labour Party as a whole comes to its senses, like much of the rest of the world has, and explores the thousands of ways the billions the Trident replacement will cost could be better spent. Investing in the NHS would be a nice start.