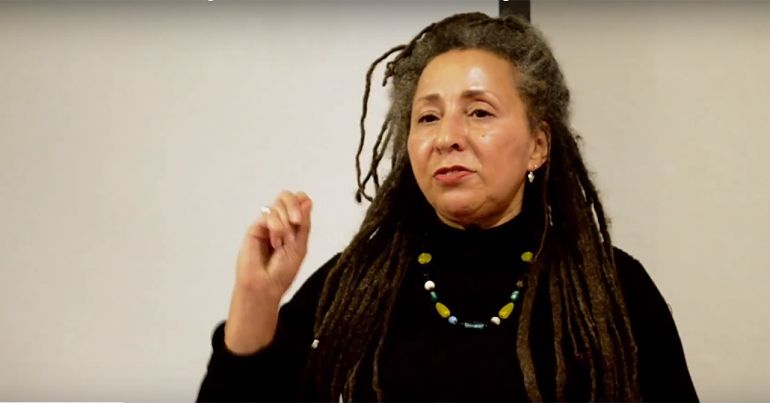 Jackie Walker is a Jewish supporter of Palestinian rights who has faced off allegations of antisemitism in recent years. And she recently spoke to me about her ordeal.

She began by explaining her background, saying:

I’m not just an activist… I was also professionally an anti-racist. So I was an adviser/teacher on anti-racism as well as going on demonstrations etc about anti-racist practice, because the reason my parents were together was because of the civil rights movement. And in the 1950s, if you even think about America, which is where I was born at that point, which was at the height of McCarthyism, and you had a white man and a black woman having a long-term relationship which produced two children – they were obviously very conscious of the barriers they were crossing. And the reason my mother was deported from America was because of her political activities…

So I’ve got these two identities, both Ashkenazi Jewish and Black, from the African diaspora, from Jamaica. And the coincidence of those two things means that… I feel I have to speak up.

She continued by highlighting what she considers a “major” attack on left-wingers who support Palestinian rights:

We’re in the stranglehold of a major witch hunt in British politics. We’ve never seen anything like it. If you want to talk about existential threats, we are having the most dangerous existential threat to the left that there’s been in modern history, and I’m not exaggerating that.

[At] the Labour Party conference, there was a bomb threat where he said – whoever the person was said – that they were going to kill a lot of people. Now, of course, nobody in the media reported that. Extraordinary. I mean I just want you to consider what would have happened if this show was being put on by a Zionist group, a Jewish Zionist group. It would have been all over the papers.

This show was being put on by a non-Zionist Jewish group, and it wasn’t mentioned, at all. At the same time, a member of a group that I’m… partly in…, Jewish Voice for Labour, was actually attacked on the streets. There, we have had threats of rape and murder. And again, the extraordinary thing is the fact that this has not been reported, at all, … in any media.

Speaking about how media outlets have treated the allegations against her, she said:

They have no interest in balance. They have a total agenda. So for example, you take the Guardian, that used to be a liberal newspaper. We can see what their agenda is and has been right from the start. And they will write article after article after article, and certainly Jessica Elgot, who is the person – she was originally a reporter for the Jewish Chronicle, then was employed by the Guardian – and she has written, I don’t even know how many. Maybe 20 articles have referred to me, maybe more… Not once, not once has she come to me to check her story. Not once. And I wrote her a very, very polite invitation, maybe about six months ago, saying ‘perhaps it would be a good idea, as you seem to have focused so much of your work on me, for us to meet’. I didn’t even get a response. So… a decision has been made, somewhere, that normal practice does not apply against Jackie Walker.

Another example – Panorama. … I was sitting there, watching it… and up I came again. And all the kind of tricks of the documentary trade were used. So there was spooky music when I came on, there was a kind of sickle moon, and there was trembling of the beats, of the rhythm, that happened as well. So I find it quite extraordinary.

Asked if she regrets no longer being in the Labour Party, Walker stressed:

I feel that actually I’m really freed up. I mean, I can say things about what’s happening in the party that I couldn’t possibly say as a Labour Party member. And that is difficult for a lot of members. I mean, I think the structures of the Labour Party are the leftovers of the… Blair structures that were put into place to silence members, and to keep them kind of on a particular track which included being Zionist, which included being neoconservative, you know, that whole sort of economic agenda. And I think a lot of us during those years sort of held our nose and voted Labour.

Speaking about the situation today, she said:

So what you’ve got is, you’ve got a left which has been under huge amounts of pressure, and not unified on this subject. There have been some groups and some individuals who decided that the witch hunt had a basis to it. Not in terms of any evidence, not in terms of any data. But they felt they had to respond to it in a very particular way. And that has meant that the response from the left has not been unified. …