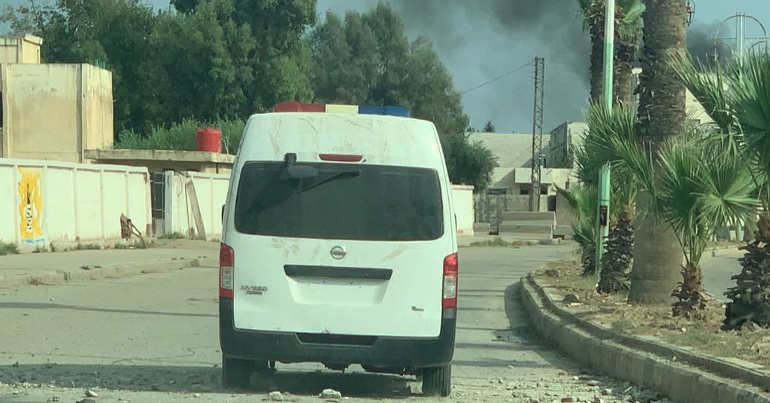 A Burmese medic volunteering in north-eastern Syria was killed in a Turkish strike on Sunday 3 November while trying to reach wounded people.

Zhao Sang was a volunteer with the Free Burma Rangers. The following video clip shows fellow medic Dave Eubank speaking about how Zhao Sang was killed:

"We’ll stay here & keep speaking about this zone of invasion, this zone of death, that Turkey & their proxies, jihadists & others, have launched." pic.twitter.com/MzmtzXdK1C

In the video clip, Eubank confirms that the team was attacked 4km outside Tell Tamer (Girê Xurma). Two more of Zhao Sang’s team were injured and are receiving treatment.

The Free Burma Rangers (FBR) are a “multi-ethnic humanitarian service movement working to help free the oppressed in Burma, Syria, Iraq and Kurdistan”. According to Eubank, Sang had come to Syria to help the wounded because of his experiences in Burma (Myanmar). And because people had come to Burma in solidarity:

He said ‘I’ll go to help… because people helped me. And the whole world, we all count the same. So he came in love and he left in love.’

The Canary contacted the Turkish embassy in London for comment about Sang’s death, but had not received a reply at the time of publishing.

Tweets from RIC list the following incidents targeting health facilities and health workers since the beginning of the invasion:

In Til Temir we spoke to Kawa of the Kurdish Red Crescent:

"We had a medical base in the village Safilii. First there were drones overhead, and after the warplane struck. Our ambulance was damaged and we couldn’t go on to the city because planes would strike us there…." pic.twitter.com/1iygZFybzr

A war against the civilian population

Why is Turkey doing this? This war from the beginning has been conducted as a war not just against military but against civilian targets; not only medical staff but also water infrastructure, electricity infrastructure, bakeries and so on. Turkey is trying to conduct a total war to terrify civilians, to prevent humanitarian aid – we saw that most of the international humanitarian actors have already pulled a lot of staff out of Northeast Syria because of this attack.

In this way, Turkey hopes to more easily occupy this land. It knows that its war is not just against military targets, it’s also against the civilian population. This is clearly shown by the attacks on medical staff. That is the logic behind these attacks.

(1/2) Update from yesterday here in northeastern #Syria. We continue to help and appeal to the US to stand with those under attack here. There have been too many displaced, too many wounded, and too many killed already. pic.twitter.com/ioabIky5KK

Right now, it hurts. But, with this pain, with this loss, we will keep shining a light, will keep sharing love, will keep helping as we can. All this, we want to do in honor of Zau and in memory of Zau. (Part 1 of 2 from our update from today, Nov. 4) pic.twitter.com/CpAWWy0j7u