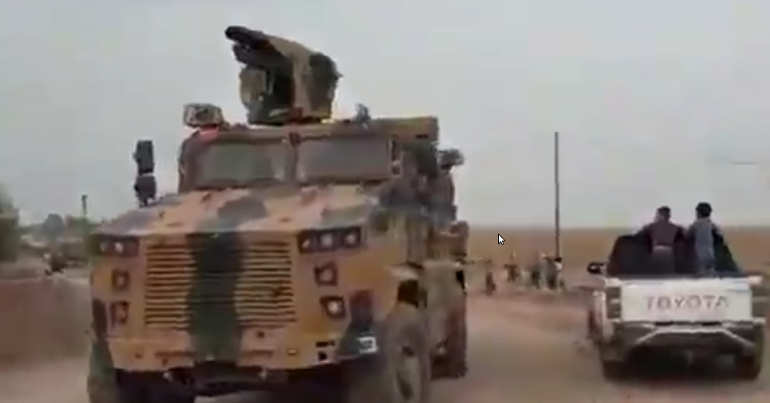 Turkey’s invasion of northeast Syria (aka Rojava) is facing fierce resistance from local defence forces. On Sunday 3 November, for example, the Syrian Democratic Forces (SDF) reported that they had destroyed a Turkish military vehicle:

As The Canary has previously reported;

[Turkish leader Recep Tayyip] Erdoğan sees the revolution in Rojava as a threat to his own autocratic rule because it acts as a beacon of hope for those who want to create radical peoples’ democracy in Turkey.

Resistance within the ‘safe zone’

Local civilians are also resisting the joint Russian-Turkish patrols in the so-called ‘safe-zone’.

On 22 October, Turkey and Russia reached an agreement to jointly patrol a 30km area along the northeast Syrian border:

Turkey and Russia are calling this area a ‘safe-zone’, or ‘security corridor‘.

On 29 October, left with little choice, the SDF agreed to withdraw:

The SDF is redeploying to new positions away from the Turkish-Syrian border across northeast Syria in accordance with the terms of the agreement in order to stop the bloodshed and to protect the inhabitants of the region from Turkish attacks. Our forces in the border zone are being replaced by border guards of the central government.

However, this video shows how the civilians living in the area feel about the joint patrols. The video was taken in the northern border town ofDirbêsiyê and shows stones being thrown at military vehicles

Stones are thrown at first Russian-Turkish patrol today close to city of Derbesiye. Turkish armoured cars without flag. They're afraid. They know exactly:

The people of Rojava and Northern Syria will never accept the occupation. #riseup4rojava pic.twitter.com/Srv44Ah6Uo

The people of Rojava are living with the threat of ethnic cleansing, and the constant threat of attack by Turkey and its jihadist proxy forces. Many are now living under occupation. They are risking their lives to resist.

We need to keep our eyes on what is happening in northeast Syria, and to do whatever is within our power to resist Turkey’s invasion.