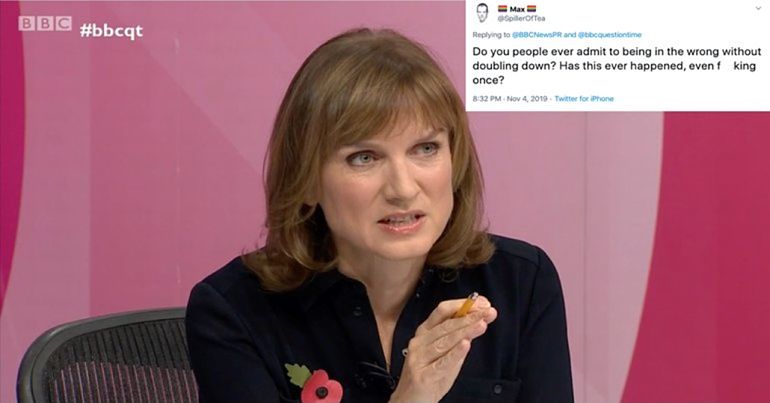 During the 31 October 2019 edition of BBC Question Time, host Fiona Bruce wrongly censured an audience member for reporting something entirely accurate. The audience member pointed to Vote Leave being accused of breaking electoral law, which it was. But Bruce intervened, claiming “I’m not entirely sure that you’re right about that”. Brexiters on the panel took over, and the moment lives in infamy. But the BBC‘s excuse for the debacle has left licence fee payers in disbelief.

Bruce’s intervention came as an impassioned and articulate member of the audience was delivering a blow right to the heart of the Johnson government:

We talk about whether we think a general election can solve Brexit – I think actually we’ve forgotten that Vote Leave is accused of breaking electoral law.

Her opening met with applause, she continued:

Dominic Cummings is… an adviser to Boris Johnson, is currently in such a position of power, yet he refused to stand before parliament and talk about breaking electoral law. He’s in contempt of parliament. I’m not sure whether we can ever have a free and democratic and fair election before those issues are sorted out. I’m not sure we can solve Brexit in this way.

At this point, Bruce intervened to claim that Leave.EU had been cleared, despite the audience member clearly talking about Vote Leave. Bruce stated:

No criminal charges were brought in the end.

At this point, the pro-Brexit panellists – Isabel Oakeshott and Tory MP Paul Scully – jumped in to dismiss claims of wrongdoing by Leave campaigns as “propaganda”. And the audience member’s powerful message was chewed up and spat out. But outside the studio, things were quite different.

Oh my fucking god. They’re not even trying to hide it anymore! This audience member recalls Vote Leave breaking electoral law and Fiona Bruce literally lies saying ‘they were cleared of those accusations’. I feel fucking sick. @bbcquestiontime pic.twitter.com/vKeNpKEOue

This young lady on #BBCQT CORRECTLY said: "Vote Leave is accused of breaking electoral law."
Fiona Bruce dismissed her assertion – is she not aware of this? She should be.
Then @IsabelOakeshott and Paul Scully piled in. If you know her – the young lady was right. pic.twitter.com/wO06DBMjyL

One day later, the @metpoliceuk confirm they just passed file on Vote Leave to @cpsuk. Will Fiona Bruce, @IsabelOakeshott and @scullyp retract? Will @bbcquestiontime apologise to this audience member, attacked for no other reason than being BETTER INFORMED than any on the panel? https://t.co/WSm3g6d9NR

People began complaining to the BBC, and seeking answers. But no one quite expected a response as transparently ridiculous as this. The BBC claimed that the studio was noisy, and because the programme is filmed ‘as live’, it’s par for the course that a “genuine misunderstanding” like this can happen. No apology.

Wait. Question Time is broadcast ‘nearly’ as live, but not actually live. The programme is recorded several hours prior to broadcast, and I know this, having appeared as a panel member myself. The footage is then edited into the broadcast slot and aired later the same evening. And it films that way precisely to avoid moments like this.

A section of one of my answers on the show was edited out due to a legal tantrum thrown by fellow panellist Liam Fox MP.

But this is not insider information. Just about everyone who watches the show knows this. For the BBC to offer disgruntled viewers such a nonchalantly absurd excuse feels like a slap in the face.

Watch the panel discussion yourselves. My (now proven) revelations about Vote Leave were referred to as ‘propaganda’ and ‘conspiracy’ by a panel member. The BBC has not only defended the panel, they’re doubling down that there was no such discussion at all. Madness. https://t.co/FTEfPeWZbW

This is such a disingenuous statement. Witnessing what the BBC has become has been as heartbreaking as it has been infuriating. https://t.co/KMvSnWi52r 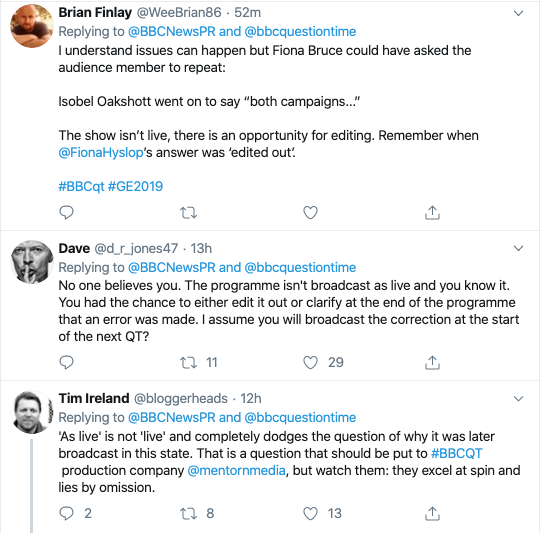 Timing made the apology-free excuse taste all the more bitter. It comes hot on the heels of the BBC‘s apology to Priti Patel over the far more trivial issue of her laughter (or lack of it) during an interview.

Good grief, what about all the times the BBC has ridiculed and talked over Jeremy Corbyn? Smirking Patel does not deserve outrage or an apology. BBC News – BBC apologises after Andrew Marr suggested Priti Patel was 'laughing'https://t.co/KOAoFZI9Wl

The BBC is funded by the licence fee payers as a public service broadcaster. Viewers rely on it as a place to escape the more partisan media landscape beyond it. Or at least they did once. The institution appears to have abandoned its mandate entirely. On a regular week, that would be a problem. But in the early days of the most important general election in Britain’s modern history, it’s inexcusable.