When Laura Kuenssberg calls out a "terrible gaffe", you know the Tory election campaign isn't going well - The Canary 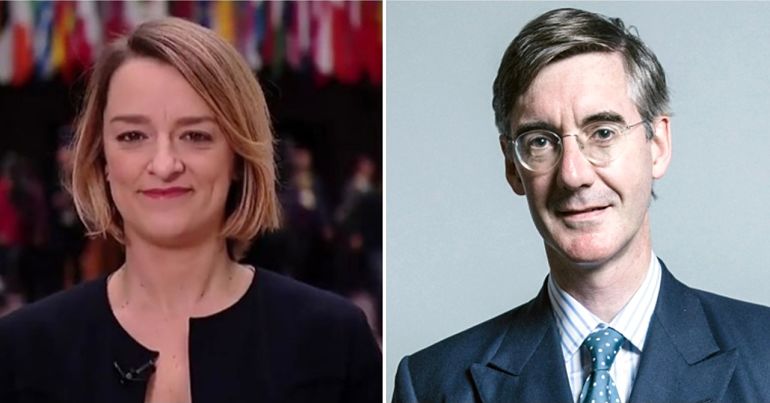 During an appearance on LBC radio, Jacob Rees-Mogg spoke about the Grenfell Tower fire. Rees-Mogg indulged in heartless victim-blaming, saying that it should have been “common sense” to ignore fire brigade advice and leave the building.

Yes, that’s right. Instead of addressing the construction companies that cut corners to save money with dangerous cladding or government departments that sat on the findings of the Lakanal House fire, Rees-Mogg blamed the victims.

His disgusting comments were challenged, and many, including Jeremy Corbyn, demanded he apologise – something Rees-Mogg quickly did. This led BBC political editor Laura Kuenssberg to tweet:

One of quickest apologies in political history – and with good reason – terrible gaffe from Mogg on Grenfell https://t.co/W4V7hFFynU

Absolutely nauseating. He has to resign https://t.co/n1jcy1jNhy

How dare you insult and denigrate those who died in Grenfell Tower @Jacob_Rees_Mogg?

The victims of this crime of gross negligence followed the instructions they were given by the fire authorities. Do not blame them.

Your arrogance and condescension is monstrous. https://t.co/7obfSIhTVW

Can you imagine being a Grenfell survivor, or someone who lost a loved one there, and having to read Jacob Rees-Mogg's comments today. The lack of basic humanity is totally unfathomable.

While Kuenssberg calling out the “terrible gaffe” is bad for the Conservative election campaign, many questioned whether “gaffe” was the right word:

Can we not call it a 'gaffe'? It really understates the seriousness of what he did.

“Gaffe” suggests a slight error of judgement, or a funny use of language. His comments were deeply offensive, and can’t be unsaid. He meant what he said.

And as others pointed out, what Rees-Mogg said wasn’t an actual gaffe:

It wasn't a gaffe though was it? He simply said what he actually thinks and then decided to backpeddle furiously when confronted with how badly it would play to ordinary human beings during an election.

A gaffe is when you accidentally contradict your party's position on a policy matter. Not when you imply that dozens of people died because they lacked common sense. Wonder if "a Number 10 source" used that word when briefing to stem the growing outrage. https://t.co/uEmmIDqEVa

They’ve got to go

There are so many reasons why we’ve got to get rid of the Tories. But Rees-Mogg’s vile and arrogant comments sum up the cruelty of the party and why it doesn’t represent any of us.

And social media users were right to challenge Kuenssberg’s choice of words. This wasn’t a “gaffe”. This was an insight into the mindset of Rees-Mogg and his elitist colleagues.

But the election campaign is only just starting, and when even Kuennsberg is calling out a “terrible gaffe”, you know it’s not looking good for the Conservative Party.