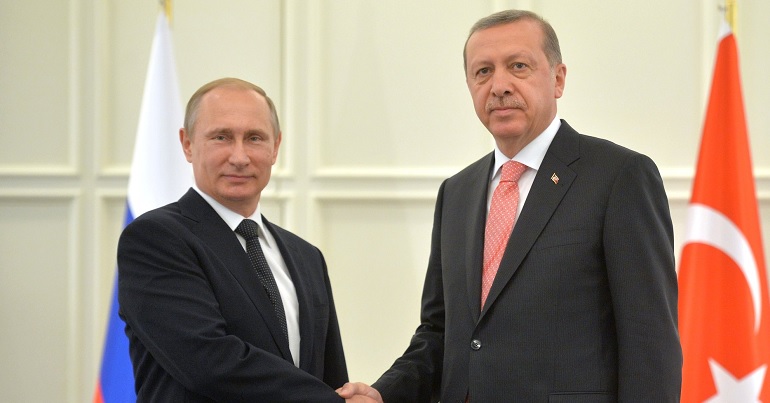 Russia says it’s working to prevent a conflict between Turkish invaders and the Syrian military, as Turkey comes under growing pressure from its allies for a ceasefire in northern Syria (aka Rojava).

Last week, the US essentially gave the green light for its NATO allies in Turkey to invade Rojava to attack the Kurdish-led forces which have been a key part of the fight against Daesh (Isis/Isil) in the region. This illegal invasion has already killed dozens of civilians, created around 200,000 refugees, and allowed hundreds of Daesh supporters to escape detention. Turkish-led invaders are also allegedly committing war crimes.

The invasion has also forced Rojava’s autonomous administration to strike a deal with the Russian-backed Syrian government of Bashar al-Assad, inviting its forces to return to the region it had abandoned at the height of the country’s eight-year-old war. Despite concerns from local people, many see this as a pragmatic necessity.

On Wednesday, Russian foreign minister Sergey Lavrov said that Russia is working to mediate between Syria and Turkey. Russia had already announced the deployment of troops to the town of Manbij to keep apart advancing Syrian forces and Turkish-led invaders. Moscow will also continue to encourage Rojava and Damascus to seek rapprochement, Lavrov said.

During a visit to Iraq last week, Lavrov met with the leaders of the country’s Kurdish autonomous region, saying that Moscow is sympathetic to their need for autonomy. It is not yet clear, however, if Russia is also sympathetic to this cause in northern Syria.

Rojava has forged a green democratic revolution in the middle of Syria’s war. Its system is feminist, socialist, and opposes all religious and ethnic discrimination. And both militarily and ideologically, it played a key role in defeating Daesh in Syria, receiving limited support from the West. Over 11,000 Rojavan fighters died in this war.

No ceasefire on the horizon yet

Now in its eighth day, Turkey’s invasion has increasingly strained relations with its NATO allies. Despite growing pressure, Turkish leader Recep Tayyip Erdoğan vowed late on Tuesday that he would not accept a ceasefire in Rojava until his country and its proxy forces had “cleared” the area of Kurdish-led defence forces.

Turkey has a large Kurdish population itself, and is currently at war with Kurdish communities both at home and abroad because of their demands for self-determination. According to the Permanent Peoples’ Tribunal, it has committed numerous war crimes in the process. In an attempt to justify its acts, it calls its opponents ‘terrorists’, despite numerous courts ruling that they are a “party to an armed conflict”. In a previous invasion of northern Syria, meanwhile, Turkish-led forces included fascists and extremist groups similar to al-Qaeda in their ranks. There is also longstanding evidence of Turkish collaboration with Daesh.

The US has now announced limited sanctions on Turkey, and said political figures were travelling to Ankara on Wednesday to try to negotiate an end to the invasion. Erdoğan, however, told journalists that he rejected US offers to mediate and that his government was “not concerned” by the sanctions.

On Tuesday, meanwhile, the Kremlin said Erdoğan had accepted an invitation to visit Russia in the “nearest days”, without providing further details. French foreign minister Jean Yves Le Drian also said in an interview on French television channel BFM Wednesday that France is now looking to Russia, given their “common interests” in defeating Daesh in Syria.

Numerous countries have now suspended arms sales to the Turkish regime in opposition to its invasion and alleged crimes, though some previously approved deals are still valid.