Swinson hates Corbyn so much, she'll back a Tory Brexit to keep him out of government - Canary Workers’ Co-op 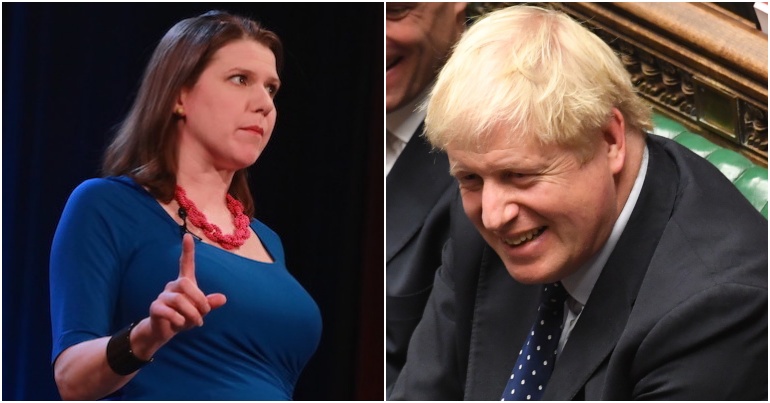 Liberal Democrat leader Jo Swinson has made no secret of the fact that she won’t work with Jeremy Corbyn. Now, she’s taken that to a new level and agreed to back Boris Johnson’s Brexit – with one condition. She said she’ll back any version of his deal if there’s a referendum attached. New evidence, however, suggests that this move could actually seal the deal for us to leave the EU on Johnson’s terms.

“No matter how bad a deal it is”

Swinson has categorically refused to work with Corbyn. The Lib Dems’ ardent Remain position meant they promised to revoke Article 50 and just ignore UK voters who opted to leave the EU; and they’ve since welcomed Tories with terrible records into their party as long as they back this anti-Brexit mission. Now, Swinson’s gone one step further, saying she’ll back any version of Johnson’s deal if it includes a referendum.

Kay Burley pinned Swinson down about her latest proposition on Sky News, saying:

You have to vote in favour of it [a deal] with the attachment of a second referendum in order for it to go to the people. It can’t otherwise.

Seemingly not quite getting it, Swinson replied:

So Burley laid it out very clearly and asked:

No matter how bad a deal it is, you’ll agree to it as long as it has a second referendum?

Swinson didn’t like this, and claimed this wasn’t “agreeing to the deal”. She criticised Johnson for not making “any reference to the public” in his current Brexit negotiations. “This,” she claimed, “is people’s lives we’re talking about.”

But Burley saw straight through this and made it very clear what Swinson was actually saying:

That will mean agreeing to Boris Johnson’s deal, whatever form it’s in, as long as it has a second referendum attached.

Somehow, Swinson still didn’t get it and claimed “it’s not agreeing to the deal. It’s agreeing to give the public the choice”. But Burley wasn’t giving up and explained:

Ok, let’s say voting in favour of it then, which you will have to do in order to get it through the house.

@JoSwinson will agree to @BorisJohnson’s deal / any deal if it has a second referendum attached.

Ms.Swinson might not like it framed that way but @KayBurley is absolutely right to make that assessment.

Not surprisingly, many people pointed out how dangerous Swinson’s position is:

Jo Swinson is now saying she will vote for ANY DEAL Boris brings back, as long as there's a second referendum attached.

I cannot help but think to myself that those LibDem members who voted for Jo Swinson as their party leader because they desperately wanted to #StopBrexit, must now be thinking to themselves what on earth have they done.#r4today

Jeezo what chance does Swinson have when even Kay Burley can tie her in knots over her hypocritical ref stance.

Charles Kennedy would have been devastated to hear Swinson speak this way. She’s the worst thing to happen to that party since Chuka Umunna.

But there’s a further twist to Swinson’s latest betrayal.

Swinson seems utterly convinced that the public would vote to stay in the EU. But according to a new poll by ComRes, this may not be the case.

The largest poll since 2016 suggests that most people still favour Brexit, and that 54% of the British public favour respecting the referendum to leave the EU:

Results shows more than half (54%) of British public support the UK abiding by the referendum result and leaving the EU, regardless of the way they voted in the 2016 Referendum.

The 54% result comes from removing those who voted “don’t know”:

So if Swinson sticks with the line of backing a deal to get a second referendum, she and the Lib Dems could well secure Johnson’s Brexit no matter what kind of deal that is. This does, of course, contradict the Evening Standard‘s analysis of all the polls since the referendum that indicated people want to stay in the EU. But it’s still a pretty huge gamble to take.

Of course, if Swinson really did want to stop an elitist Tory Brexit, she’d back Corbyn. Because the Labour position is to prevent a no-deal situation, secure a good deal and a general election, and then reach out to both Leave and Remain voters by putting a new vote to the public.

Swinson can’t be trusted, though, especially considering her terrible record of supporting austerity. She’s actually more Tory than some Tories. So perhaps we shouldn’t be at all surprised by her latest move.