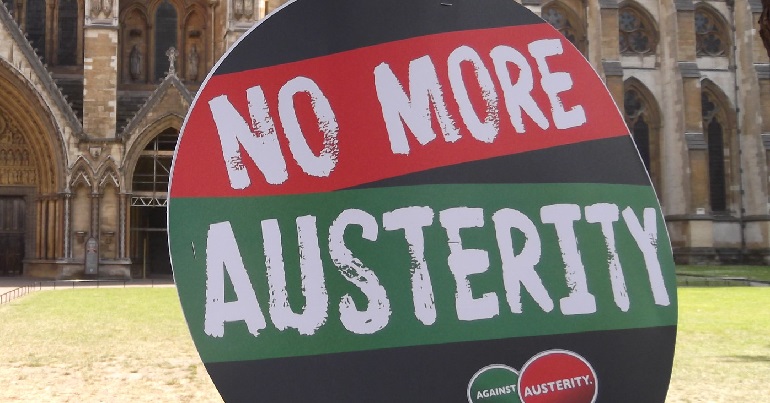 The first round of Argentina’s presidential election takes place on 27 October 2019. And there is great expectation that Argentina’s united left will win this important election after its candidates for president and vice president, Alberto Fernández and Cristina Fernández de Kirchner, secured a stunning victory in the country’s primary election which took place on 11 August 2019. This national poll, which is considered an authoritative indication of public opinion, saw the broad left-wing alliance Frente de Todos (Front For Everyone) secure 47% of the vote, defeating the incumbent, right-wing president Maurico Macri by a 15% margin.

The impressive rise in support for the left in Argentina reflects growing discontent within the country against Macri’s neoliberal policies. Macri’s government has implemented an aggressive austerity programme which has resulted in a social catastrophe and plunged the country into a deep economic crisis.

In an act of national humiliation, Macri approached the International Monetary Fund (IMF) for a loan, which was agreed in mid-2018. The $57bn loan was awarded with economic impositions that Macri carry out further austerity – with disastrous consequences. In the twelve consecutive months up to April 2019, Argentina’s economy was in recession and the rate of inflation has reached 55%.

Argentina’s National Institute of Statistics recently revealed that poverty had increased from 27% last year to 35.4% in the first half of 2019. This means that the policies of Macri’s government have plunged 3.7 million people into poverty in the last twelve months alone. When Kirchner left office in 2015, the poverty rate stood at 19.7%.

Macri’s attacks on living standards have been opposed with large protests and strikes.

Alberto Fernández, meanwhile, is standing for president on a clear anti-austerity platform, and he has vocally opposed Macri’s deal with the IMF.

The fact that the left is in a strong position to win the forthcoming election in Argentina clearly demolishes a myth that has been popular in the mainstream Western media. A chorus of commentators declared that Macri’s electoral triumph in 2015 marked the beginning of the end of the ‘Pink Tide’ of left-wing governments that came to office in most Latin American countries during the first decade of the 21st century. This was a totally incorrect assessment of the situation. The reality is that both the right wing and left wing have deep social roots and mass support in Latin America.

What the election of Macri in 2015 did herald was the start of a major US-backed offensive in Latin America which resulted in a series of defeats for the left, including in Brazil and Ecuador.

It is, however, simply untrue that the ‘Pink Tide’ was swept out of existence. The left has continued to be in government in Bolivia, Nicaragua, Venezuela, and Cuba throughout this period, despite US-backed efforts to oust them through attempted coups, harsh economic sanctions, and heavily funding right-wing opposition movements. The left also won the presidential election in Mexico last year.

In countries where the left are in opposition in Latin America, large-scale resistance is being waged against right-wing governments. Over the past two weeks, for example, massive protests against the IMF-backed austerity measures of Lenín Moreno’s government rocked Ecuador. Moreno responded with brutal state repression, but protesters have since won concessions. In Brazil, meanwhile, the first ten months of Jair Bolsonaro’s term of office has seen millions of people join protests against his austerity programme.

The significance of a left breakthrough in Argentina

An electoral breakthrough for the left in Argentina, one of Latin America’s most influential countries, would significantly strengthen the left wing across the continent.

Alberto Fernández has already signalled, for instance, that he would significantly shift Argentina’s foreign policy away from Macri’s total subservience to the US. He supports Lula da Silva, Brazil’s former president who is widely regarded as the world’s most famous political prisoner. Earlier this year, he visited Lula in prison and said: “I believe in his innocence and he has every right to be free and to defend himself.” Lula was jailed in the run-up to last year’s presidential election in Brazil on the spurious grounds of having committed “undetermined acts of corruption”. At the time of his jailing, Lula was the leading presidential candidate with all opinions polls showing that he was significantly ahead of his nearest rival Jair Bolsonaro, who won the election after Lula was barred from standing by the courts.

Fernández has also announced that he would withdraw Argentina from the ‘Lima Group’, which is an initiative of right-wing governments in Latin America, promoted by the US and established in 2017 for the specific purpose of attacking Venezuela.

The need for a strong alternative

Aside from facing Donald Trump’s hostile US administration, the greatest challenge facing any incoming left government in Argentina will be attempting to resolve the country’s deep economic crisis. Under Macri, Argentina has become colossally indebted to the IMF. The overall economic situation facing the left throughout Latin America in 2019, a decade on from the international financial crash of 2008, is very different from the situation that faced the ‘Pink Wave’ when it arrived on the political scene in the early 2000s. Now, the situation is much more difficult, with a global economic slowdown and no prospect of a commodities boom.

Developing alternative models to neoliberalism that are capable of eliminating poverty and raising living standards in this new economic reality is a crucial question facing the left. Economist Elias Jabbour, who is a professor at the Rio de Janeiro State University, believes that the left in Latin America should look to the success of the left in Asia for inspiration. But whatever direction it moves in, it seems people across the region are once again rising up in opposition to the destruction caused by neoliberal austerity.