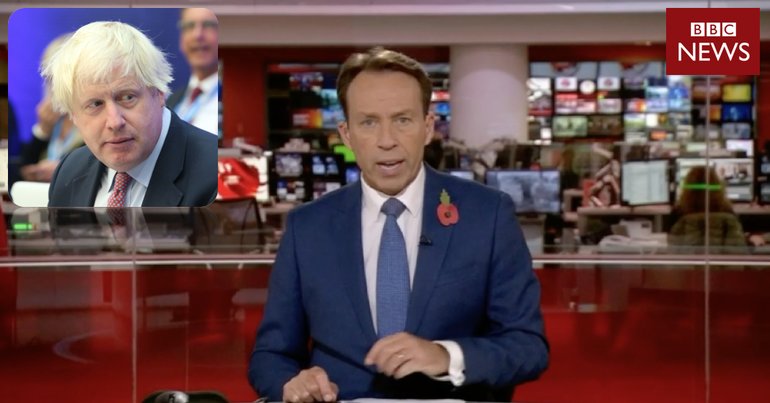 In a remarkable piece of timing, the BBC has made warning against “politicising” the NHS its top story. This came with Jeremy Corbyn due to visit a hospital and announce major healthcare plans, and just days after Boris Johnson was booed out of a hospital. To even the most ambivalent bystander, it looks a lot like the BBC is coming to the rescue of a troubled prime minister. And the execution has been more troubling than the timing.

The visit from hell

Despite BBC cameras managing to cover every sniffle against Labour leader Corbyn, they seemed to miss the most significant electoral moment of last week. It was left to locals to capture and report the moment the prime minister was booed right out of a hospital during a botched election event.

It was clear that Corbyn was likely to be greeted quite differently by both staff and patients. And so he was. But instead of this being the story, the BBC spent all day blaming Corbyn and Johnson for weaponising the NHS.

This isn’t balance. This is avoiding the impression that Corbyn might just be more popular than Johnson outside the Westminster punditry circuit. And news like that can end elections.

BBC Radio 4‘s Today kicked things off with NHS Providers chief Chris Hopson warning that “over-dramatising NHS difficulties” or making “disingenuous” funding claims did the service “no favours”. And by News at One, the topic was literally its lead story:

As shown in the clip above, the BBC then used two examples of the types of claims being made by the Conservatives and Labour. The first was Labour’s claim that the Tories could privatise the NHS in a post-Brexit trade deal with the US. The second was Boris Johnson’s claim to be investing record amounts in the NHS and building new hospitals. The problem is, one claim is true; the other claim is demonstrably false. And the BBC didn’t bother to point that out.

Donald Trump himself has stated that the NHS would be on the table in trade discussions:

Here’s @realDonaldTrump confirming the NHS WOULD be on the table, along with everything else, in a trade deal. #R4today pic.twitter.com/GAoYEK29Wg

And a recent investigation by Channel 4‘s Dispatches programme revealed that secret talks were taking place:

2/10 A source with knowledge of the trade talks told Dispatches that British trade negotiators have already held six official meetings with their US counterparts to talk about what might be in any trade deal.

Dispatches discovers how Donald Trump’s allies and US drug giants want to force the NHS to pay more for US medicines.

Tahir Amin is a British lawyer based in America who is an expert on drug pricing and on previous trade negotiations. pic.twitter.com/RB0t8XAJAd

There is ample evidence that Labour’s claim is true. But neither the BBC News anchor nor health editor Hugh Pym mentioned this. Instead, they presented it as of equal veracity to a mendacious and debunked claim by Johnson.

In September, Johnson claimed his government was building ’40 new hospitals’. But it later emerged that funding was only approved for six. And some weren’t even new hospitals, but extensions to existing hospitals.

The BBC seemingly failed to report Johnson being booed out of a hospital. They then overshadowed Labour’s health announcements with a contrived political storm about ‘weaponising’ the NHS. And finally, they presented an evidenced and serious claim from Labour as equally problematic to a known lie from the Conservatives.

This is beyond poor journalism. This is propaganda. This is a complete distortion of reality, with the apparent purpose of misleading viewers. The only rational outcome of an uninformed viewer was sympathy with NHS leaders for having these equally untrustworthy politicians ‘weaponising’ their important work. And informed viewers were outraged:

The Corrupt Media in a nutshell

It’s no coincidence that ahead of the election the BBC is claiming the NHS ‘shouldn’t be politicised’.

It’s the largest share of public expenditure, the country’s largest employer & a matter of life or death for many.

Of course it is political – if it isn’t, then what is?!

So let's be clear on this: when Johnson visits a hospital, it's headline news for the BBC, who conveniently omit reporting how he was loudly booed.

When Labour bring up the chronic underfunding of the NHS then they cry out how the NHS shouldn't be weaponised!
Outrageous #BBCbias

It was created by socialism, has been intentionally underfunded and sold off by successive capitalist governments, and will be restored to what it should be by the next socialist government.

It is political. It matters.

This is not how public-service journalism works. It is, however, a very powerful example of state propaganda. And in the run-up to a general election, moments like this need to be called out at maximum volume – in the hopes of restoring honesty to political debate.