Meet the Green who could join Caroline Lucas in parliament - Canary 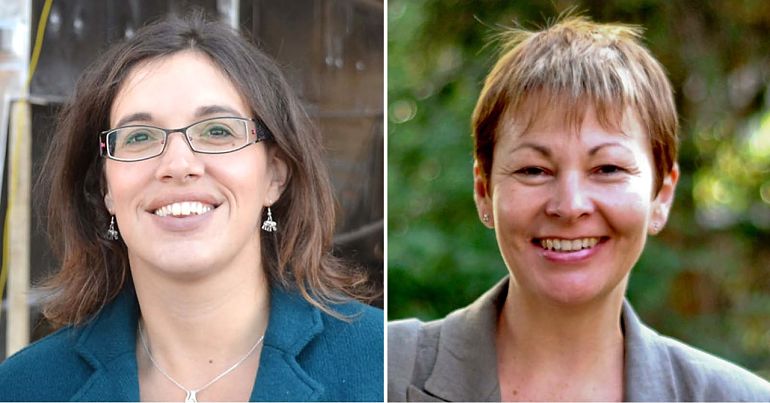 The most interesting campaigns in a general election are those on a local level. Few are more interesting than the one currently underway on the Isle of Wight.

It’s the biggest constituency in the country by population, with over 110,000 people registered to vote in 2017. An estimated 62% of people voted leave there in the 2016 Brexit referendum. It’s returned a Conservative MP for every election since 1987 bar one.

And yet, it’s also one of the seats the Green Party is hoping to win in this election.

Vix Lowthion is the Green candidate on the island. And she’s not your typical politician.

Before we sit down to discuss her chances of becoming an MP on December 12, she’s doling out leaflet bundles to volunteers in her campaign HQ. She spots that one of them contains “Cypress Road” which she notes is on a hill – before giving a rendition of a Cypress Hill song. Later, she bemoans the way the BBC hair and make-up team insist on making her look “like a Tory” before TV appearances.

Lowthion is personable and engaging, free from the polished slickness of other politicians. But the crucial question is – does she have a shot at becoming an MP?

Our conversation starts by looking at how the campaign is going this year. The Greens first put up a proper fight in the seat in 2015. And Lowthion has been the candidate in every election since.

Lowthion explains that – with the febrile political backdrop, the stakes in this campaign are higher than ever before:

But on the island that real change comes from the Green perspective, and that seems to be unique in the country or in the area. And trying to get that over is – well we’ve got an open door.

When pressed as to how good the Greens’ chances are, she remains optimistic but unwilling to say outright what she thinks will happen. Instead she focuses on the Greens’ “massive potential”:

And I think here it’s very clear that we’ve got the potential. A massive potential.

But the reality is that getting Lowthion elected to parliament would be a huge upset. Although the Isle of Wight saw the second highest Green vote in 2017, the party came third behind Labour. And the incumbent Conservative is sitting on an intimidating 21,000 vote majority.

Convincing Labour voters to plump for the Greens would therefore be key to her success. Lowthion acknowledges this is a challenge. But she says the campaign has a strategy for converting them – by arguing the Greens support many Labour values, and also have a plan to bring the Brexit “shambles” to an end:

Well a lot of the issues that they bring up on the doorstep are issues that the Greens have also been talking about – in terms of public services and the lack of investment. And Jeremy Corbyn has done well with the 2015 Green Party manifesto, which has been fantastic.

So not only are we offering what they want from Labour in terms of that investment in public services, but also looking at taking the Brexit shambles and dealing with it – and [we’re] not afraid to do that.

Her reference to Labour’s shift to the left and adoption of Green policies from 2015 isn’t bitter. Rather, her tone suggests a genuine welcoming of the party’s direction of travel – at least for everything except Brexit.

A Remain party in a Leave seat

Brexit is a tricky subject for Lowthion on the island. The Greens have centred opposition to Brexit in their national election campaign and are pushing hard for a second referendum. But with the majority of islanders voting for leave, how can the Greens hope to win over enough voters to beat the Conservatives?

Lowthion begins by expressing frustration about the framing of the election as being about Brexit. She explains that her campaign has instead focussed on a wider range of issues:

Well I’d rather this election wasn’t about leave or remain to be honest. I think it’s about a whole host of issues, including public services and the climate emergency. So when we started off that campaign, that’s what we were focusing on.

We acknowledge that you need to listen to the causes of people voting in that particular… way. So, the message that we’re putting across on the island is not just a remain message at all.

One issue that fires Lowthion up throughout our conversation is Britain’s broken democratic system. Her frustration with our democracy runs through much of our discussions. And it’s not just frustration born from the way the system shuts out the Greens, but also the wider impact it has on our politics:

if we had a fair electoral system we would have 20 Green MPs.

And the challenge that we’re fighting constantly – it’s not against Labour. And it’s not even all the time against the Tories. It’s against the system, which wants to shut us down.

It needs to be root and branch reform of how our parliament works. When you look at other parliaments across the world, they do not face each other and scream at each other like ours do.

Away from the campaign trail, Lowthion works as a schoolteacher. And it’s in discussing education reform that she’s best known within the Greens – as the party’s education spokesperson.

so I’ve taught at lots of different sorts of schools. So I’ve taught at – sort of – inner-city schools in Leeds and then schools in rural coastal areas as well. And they all have the same thing in common – which is a prescribed, pigeon-holing curriculum which does not focus on individual needs, or in fact skills needs for the country.

She talks freely and extensively about the issues facing schools in the UK. But when asked if she could change one thing in the education system, her answer can be summed up in one word: academisation. She says:

For me – it’s not very exciting – but it’s local accountability of schools. I think I’m concerned about academies and making money from schools. Because it really emphasises having a business approach to schools, really changes the entire way in which schools judge themselves [and] judge the children.

People are fed up

The rest of our conversation meanders in all sorts of directions. From trade unions (Lowthion thinks the Greens need to work more closely with them) to her favourite Spice Girl (Mel B – because Lowthion taught at her school). And from her favourite fellow Green (Magid Magid, of course) to the trio of pet cats she used to have (called Paddy, Ash, and Down).

Throughout it all, it’s clear that Lowthion is a rare find in politics. She’s a genuinely ordinary person with a vision and ambition to make the lives of the people she seeks to represent better. Whether she’ll become an MP on 13 December is impossible to know. But nonetheless, she’s clear that whether or not she does – people on the island are looking for change.