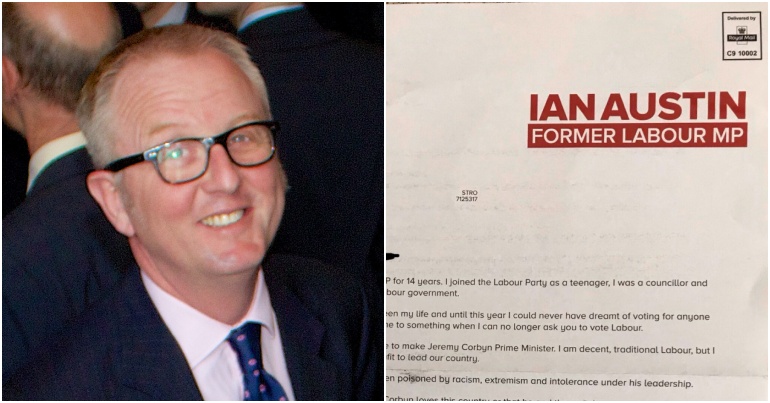 With less than two weeks to go before the general election, the Tories are getting desperate. And now, one of the Conservatives’ newest champions just took that desperation to a whole new level.

Former Labour MP Ian Austin left the party in February and continued as an independent MP. In November, Austin announced he was standing down at the general election and threw his support behind Boris Johnson.

Now, he’s named as the author of a letter to voters. The letter tells people not to vote Labour. But it also issues a scathing attack on Jeremy Corbyn, filled with spin and inaccuracies.

It goes on to criticise the Labour Party’s economic plans and implores people to back Johnson. Equally twisted, is that Austin appeared to want sympathy. In the letter he says it wasn’t easy for him to decide to vote for the Conservative Party.

But he got little sympathy from those who received the letter.

One recipient asked, “how can they get away with this?”:

Wow a letter from the tories, from Ian Austin , now Tory , begging me not to vote for terrorist supporter Jeremy Corbyn .. delivered by Royal Mail , my postman was furious, there’s no envelope so everyone can read it , he said “How can they get away with this ? pic.twitter.com/0mEnignxfC

Another questioned how the recipients of the letter were chosen:

@IanAustin1965 Ian I have got home today to find that I have received a letter from you.

I am not in your constituency

1) where you have got my address details from please

2) How did you know I was a labour member

3) Who and where have you got the data from @UKLabour

And Aaron Bastani claimed it was “printed and distributed by the Conservative party”:

Ian Austin, a political slug vaunted by the media establishment as a ‘real Labour man’ is presently writing Tory propaganda.

Literally – this letter was printed and distributed by the Conservative party. pic.twitter.com/Ic8LclkqDj

No friend of Labour

This isn’t the first attack on Corbyn from Austin. In November he made a similar plea, and the establishment media lapped it up. The Conservative Party also paid to fill Facebook with videos of Austin slating Corbyn.

But despite this, voters backing a Corbyn-led government aren’t fooled. Because as The Canary‘s John Ranson wrote in November:

Austin is one of yesterday’s politicians, a relic of the Blair-Brown era that prized a strange sort of belligerent centrism over a genuine vision for the country. The Labour Party under Corbyn has already laid out such a vision, during the 2017 campaign. Corbyn’s authentic enthusiasm and a hugely popular and impressive manifesto delivered a huge upsurge in support and took Labour very close to government.

This is a desperate move. And with Johnson’s poll lead shrinking, the Conservatives may get even more desperate still. But judging by the reaction to this latest move, pleas from Austin aren’t going to help the Conservatives’ election chances.