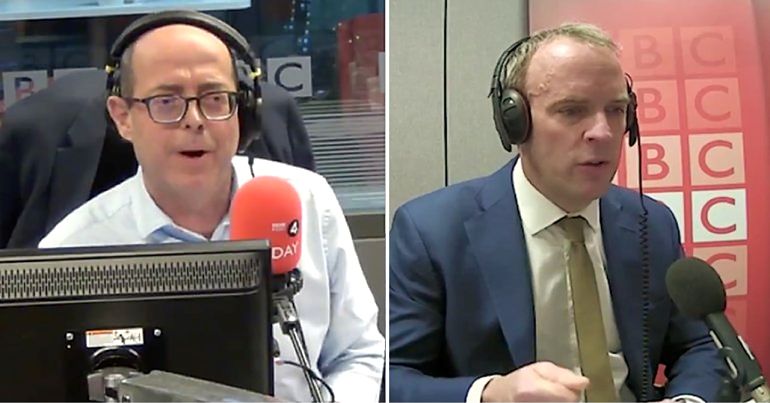 During an interview for the Today programme, BBC host Nick Robinson confronted Conservative foreign secretary Dominic Raab about plans to sell the NHS. The foreign secretary’s denial fell apart when Robinson pulled quotes from the 2011 pamphlet After the Coalition, in which Raab and other now-senior Tories laid out their plans for selling the NHS. And that’s when he lost it.

The privatisation of the NHS

In 2011, several Conservatives who are now in senior cabinet positions wrote After the Coalition. Aside from Raab, authors included home secretary Priti Patel, international trade secretary Liz Truss, and business minister Kwasi Kwarteng. The pamphlet pushed for a hard-right takeover of Conservative policy, akin to US-style unfettered capitalism. This included privatising the NHS.

But when Robinson asked Raab if he was in favour of selling the NHS, the foreign secretary dismissed it as “a ludicrous assertion”.

"That's a ludicrous assertion"@DominicRaab denies pamphlet he co-authored – suggesting 2/3 hospitals could be run privately or not for profit – would encourage US trade interest in the NHS #r4today | https://t.co/JoWgjA2KLd | @bbcnickrobinson pic.twitter.com/TMZ0UmRIXk

Unfortunately for Raab, he’d declared his real views in a very permanent way. Here’s how Raab and his co-authors described their plans for the NHS in 2011:

The current monolith should be broken up. Hospitals should be given their independence, extending the Foundation Hospital model – initially controversial but now almost universally accepted. New non-profit and private operators should be allowed into the service, and indeed should compete on price.

Dominic Raab this morning: "I can tell you categorically I've never advocated privatisation of the NHS."

When faced with these quotes, Raab lost it.

Nothing says, “I’m telling the truth,” quite like the prolific sweating and bulging fucking temple vein of a guy who’s heard one of the police officers raiding his house say, “We’ll just check the chest freezer in your cellar and we’ll be on our way.”pic.twitter.com/2BhjOC6E1X

Raab tried to claim he’d been referring to coffee shops and newsagents in hospitals. But Robinson pulled a quote that specified hospitals, to which Raab shrugged angrily and reiterated his denials.

But we already know Raab stands behind these plans, because he and his fellow authors doubled down on them in 2012.

The year after the pamphlet, the same group of Tories published Britannia Unchained. It’s central argument? Thatcherism was too left-wing. The authors laid out their plans to replace it with a more brutal, capitalist free-for-all. This is how the book describes the British working class:

The British are among the worst idlers in the world. We work among the lowest hours, we retire early and our productivity is poor. Whereas Indian children aspire to be doctors or businessmen, the British are more interested in football and pop music.

The book was a plea to tear up the social contract and let business reign supreme. As Labour’s John Cruddas put it:

It seeks a planning free-for-all; it celebrates chaos. It would dismantle valued national institutions – in broadcasting, policing, transport and health. … It threatens the “national-popular” foundations of the Thatcher revolution; it is a brutal and destructive creed at odds with national interest as she understood it.

The authors advocated for privatising the NHS, along with basically everything else. It would shrink the state to the point of its power to raise an army, with almost everything else in the hands of big business.

more radical version of neoliberalism, where we’re basically, finally, told: ‘The race to the bottom, to be like China, is on, and we’re all going to do it. So your wages will meet the Chinese somewhere, and so will your social conditions … abolish minimum wages, abolish social protection.

Raab and his co-authors were all members of the hard-right Free Enterprise Group. This group of Tory MPs advocated for the policies of Britannia Unchained, and current health secretary Matt Hancock was a member.

Boris Johnson has chosen to promote these Britannia Unchained Tories to the most senior positions in his cabinet. And that tells us exactly what we can expect if UK voters elect this government on 12 December.