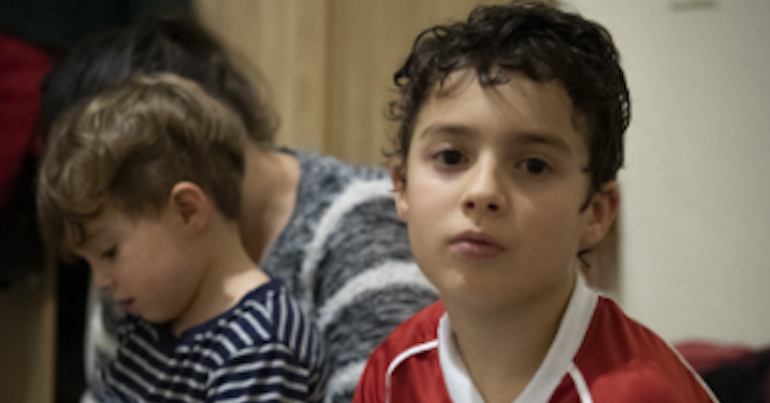 A devastating new report has found that every eight minutes a child in Britain becomes homeless. Record numbers of children are going hungry. And as the winter bites, others don’t have a warm coat or proper shoes. After nine years of Conservative-led governments and austerity, this is the reality of Tory Britain.

on Christmas Day 2019 there will be at least 135,000 children in Great Britain who are homeless and living in temporary accommodation.

This is the highest number in 12 years, and numbers have risen 51% in the last five years alone. On average, every eight minutes a child loses their home. This, it says, is the “equivalent of 183 children per day, enough to fill 2.5 double decker buses”. It also equates to “an average of five homeless children” for every school in the UK.

As Shelter noted, the report “also shines a light on the 5,683 homeless families with children currently living in emergency B&Bs and hostels”. This is “widely considered the worst type of accommodation”. Emergency accommodation squashes whole families into one room. As a result, there’s very little space “to cook, play or eat”. Families have to share “bathrooms with strangers”. And temporary accommodation “is often located miles away from schools, jobs and loved ones”.

In the London boroughs of Kensington & Chelsea, Haringey, Westminster, and Newham, one in every 12 children is homeless. Outside of London:

the places with the highest concentration of homeless children are Luton (1 in every 22 children), Brighton & Hove (1 in every 30) and Manchester (1 in every 47)

“It’s worse than being in a real-life horror film”

While these statistics are shocking, we can’t forget they reflect real children’s lives. Ten-year-old Will said:

Life in the B&B is horrible, it’s worse than being in a real-life horror film. There’s no room to do anything, even if I’m reading my book, as I’m still going to get annoyed by someone. I’ve been told off by someone for running in the small corridor, you can’t do much, you can’t play much. I don’t get to play that often.

Will’s family live in an emergency B&B in Ilford. They became homeless following a Section 21 ‘no fault’ eviction notice. He also explained:

“Every child has the right to a safe home“

Polly Neate, chief executive of Shelter, called the findings “scandalous”. As she also stressed, they act as a “sharp reminder that political promises about tackling homelessness must be turned into real action”. She continued:

Day in, day out we see the devastating impact the housing emergency is having on children across the country. They are being uprooted from friends; living in cold, cramped B&Bs and going to bed at night scared by the sound of strangers outside.

Every child has the right to a safe home and if we act now, we can help get them to a better place.

Labour’s David Lammy called the findings of the report “unforgivable”. He said:

In the 6th richest country in the world, no child should be homeless at Christmas.

Lack of safe housing isn’t the only crisis children face. A teacher in north Lincolnshire told GrimsbyLive that she regularly sees children:

who arrive shivering cold with soaking wet feet because they do not have coats and they have holes in their shoes. …

The truth is some parents cannot afford to buy their children new school shoes or even buy them a good, long-lasting winter coat.

It is so upsetting that in this day and age people have to go through this hardship. We do all we can as a school but it is only solving the problem at a superficial level.

One child in my classroom has been arriving to school in a jacket which was bought for a family occasion, while another has been showing up in old, worn out school shoes.

She admitted that she’s often reduced to tears. She often tries to give “secret snacks” to some children who are clearly going hungry.

“Most of us are really hungry”

As The Canary reported, a boy called Cameron said:

We try not to eat a lot in one day. Even though most of us are really hungry. We have to be careful with our food.

As of 2016/17, 30% of children – 4.1 million – were living in poverty in the UK. 67% of those children had a parent in work. Many working parents claim Universal Credit. As The Canary previously reported, Universal Credit has forced some people to use foodbanks and made others homeless. In April, the Trussell Trust revealed that foodbank use in the UK had hit a record high. In July, it said:

Over a third of all emergency food parcels distributed by food banks in the Trussell Trust’s UK-wide network go to children.

In response to 2019 figures that identified numbers of children living in poverty around the UK, Anna Feuchtwang, chair of End Child Poverty and chief executive of the National Children’s Bureau, said:

in many areas growing up in poverty is not the exception it’s the rule with more children expected to get swept up in poverty in the coming years, with serious consequences for their life chances. Policymakers can no longer deny the depth of the problem or abandon entire areas to rampant poverty. …

Even the Government’s own measures show that child poverty in the UK has been rising steadily since 2013 with measures of absolute child poverty showing a rise for the first time this year. This just isn’t right.

As she explained, “growing up in poverty” also ‘traps’ children:

It restricts a child’s chances of doing well at school, of living a healthy and happy life, and of finding secure employment. We urgently need Government to set a course of action that will free our children from the grip of poverty.

These figures highlight the reality of life for too many children across the UK. If another Conservative government comes to power on 12 December, these devastating statistics will only rise higher. If you know anyone undecided, or thinking of voting Tory, please, please ask them to put children first and vote this vile government out.