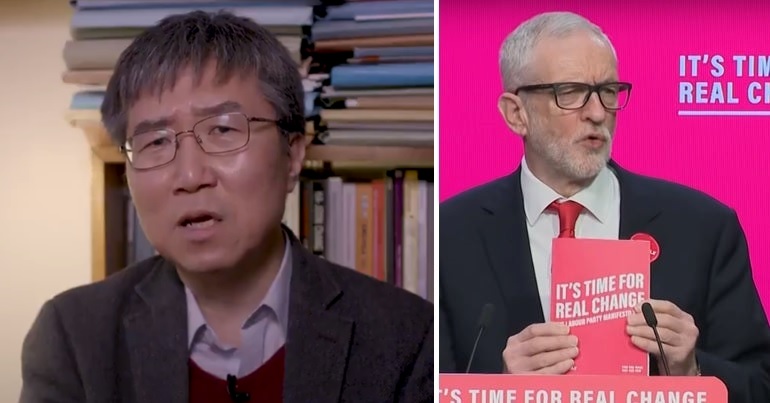 Cambridge economist Dr Ha-Joon Chang has given his take on Labour’s fully-costed 2019 manifesto. And speaking about the need for “a complete overhaul of the economy”, he explains why the manifesto “points to the right direction”.

1) No to a US-style health system

There are currently fears of further privatisation in the NHS if the Conservative Party keeps power on 12 December. In particular, there are concerns that a post-Brexit trade deal with the US would hand wads of public money over to US corporations. Labour, meanwhile, would stop this and invest significantly in the treasured public service. And Chang outlined why this is the preferable option, saying:

The Americans spend… 17% of national income on healthcare. So Americans are effectively spending sometimes twice more than European countries on healthcare, and they have the worst health statistics in the rich world.

If we collect taxes to… bail out the banks which have got into trouble because they were too greedy… that’s money wasted.

If we spend the taxes to rebuild infrastructure, to strengthen the welfare state, I think that’s money well spent.

Labour is asking only the top 5% of UK earners to pay more tax. It will use this money to empower ordinary people after disastrous decades of increasing inequality.

Labour’s promise of democratic public control of vital services – like healthcare, education, energy, and transport – is popular. And it makes economic sense.

Chang called the current state of privatised railways and water a “disgrace”, saying:

With this in mind, he told people opposing nationalisation that:

If you are against public ownership, you should be against state-owned companies of other countries that are buying up your own economy.

Labour has also pledged a Green Industrial Revolution of massive public investment to tackle the global climate emergency. And Chang seemed to back this, stressing:

if you don’t do something radical, the country will be in deep trouble.

In particular, he said:

we need to revive the productive sector of the British economy

And to contrast Labour’s proposals on new green technologies with the Conservative Party’s record in government, he asked:

what has this country’s government done in terms of promoting these new sectors that are not only necessary but are potentially very, very good in generating productivity, growth, and jobs?

The answer, of course, is ‘next to nothing‘ and ‘little to come‘.

Now she has this warning for us all: pic.twitter.com/Bx6WTdBqFv

163 economists, meanwhile, proudly signed an open letter on 25 November saying the “UK economy needs reform” and that Labour “deserves to form the next government” because it has “serious proposals for dealing with” Britain’s “deep problems”.

In short, Labour is offering a vital plan for change that will benefit the many; and it has the backing of countless economists. The Tory manifesto, on the other hand, just offers more stagnation and policies that benefit the ultra-wealthy few. The choice on 12 December should be a no-brainer.