We need to talk about the Tory manifesto. Because it's just lie after lie. - The Canary 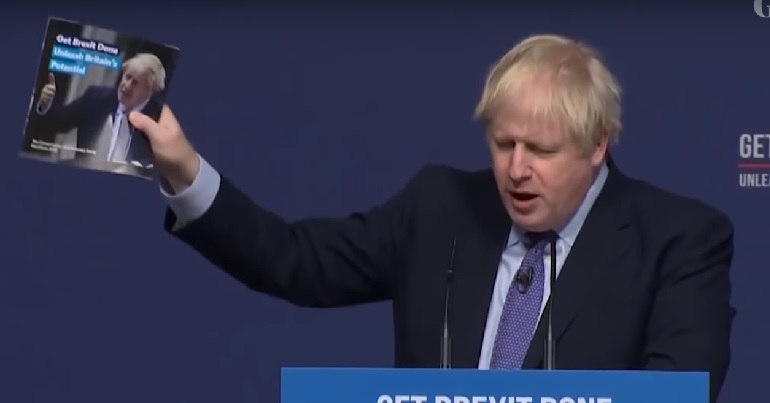 We urgently need to talk about the Tories’ feeble 2019 manifesto. Because they lied again and again. And we mustn’t let them get away with it.

Boris Johnson’s team has been lying for months about the NHS. The dodgy promise of 40 new hospitals has perhaps been the most recurrent. And Johnson predictably repeated it on 24 November, forcing fact-checkers to debunk it yet again. Considering that the front page of the Tory manifesto is basically just a large picture of Johnson, though, it’s hardly surprising that it would continue his long-established tradition of lying to voters.

Fortunately, doctors have consistently called out Tory lies on the NHS:

He just said it again.

But this doctor is having none of it. pic.twitter.com/kztbKGCX6L

But now, there’s yet another dodgy pledge to add to the list. Because the manifesto promised “50,000 more nurses”:

Biggest single new pledge by @BorisJohnson is £897m a year to increase pool of NHS nurses by 50,000 by 2023, including reinstatement of bursary. #ToryManifesto

The Tory costings document reveals that the party would spend £759m on “nurse recruitment, training & retention” in 2020-21, rising to £879m in 2023-24. But people quickly pointed out that the party’s “annual maintenance grant worth up to £8,000 a year to get enough students trained up to meet the target” didn’t quite add up – especially in “a manifesto notably light on detail“:

Boris Johnson pledge for 50,000 more nurses not quite what it seems – 12k from abroad, 14k new undergrad students, 5k degree apprenticeships. Which leaves 19k nurses “retained” who would otherwise have left… so not “new” nurses at all

With this in mind, Labour’s Jonathan Ashworth openly called out the “deceit”:

Yeah funny that because it doesn’t add up. It’s not a pledge it’s a deceit.

Yet again the evidence shows you simply can’t trust the Tories on the NHS. pic.twitter.com/4oo9TvJjs2

After almost a decade of austerity, meanwhile, others just had to laugh:

Great to see the Tories promising to recruit 50000 nurses and 20000 police to replace the numbers lost in the devastating, politically motivated cuts imposed by – *checks notes* – the Tories. #ConservativeManifesto

The Tories have a terrible record on healthcare since 2010. So it’s little wonder that people are holding them to account. Because they’ve overseen:

In their manifesto, the Tories say they’ve been a “steward and guardian of the NHS”, insisting that “it is coping with increasing demand”. It’s clear, though, that none of that is true.

This is why you simply can’t trust Boris Johnson and the Tory Party with our NHS.

The only way to protect our NHS from a Trump trade deal is to vote Labour.

Under Johnson, meanwhile, it’s almost impossible to believe that the NHS is safe. Even high-profile Tories have admitted as much. Because he has a long record of supporting privatisation. And as The Canary recently reported, he even “held a lavish party to sell our NHS, and used taxpayer money to pay for it”.

He’s also part of an unholy alliance with Donald Trump and Nigel Farage. Trump wants a post-Brexit NHS deal that sees the service pay out much more to US corporations. And Farage has made it perfectly clear in the past that he favours NHS privatisation.

Around 70% of the British public, however, believe that their taxes should fund a public NHS. So it’s no surprise that Johnson and his allies are now lying to convince voters that the NHS is safe in their hands.

Labour, on the other hand, created the NHS. And its 2019 manifesto has pledged an extra £26bn a year to the service. It also has a 10-point plan to deal with the negative impacts of 9 years of Tory austerity. Regarding nurses, in particular, it has promised them a training bursary, a pay rise, and “a clear commitment to put safe staffing into law”. And the Royal College of Nursing has said:

Labour have met our election ask for all parties to put £1bn into nursing higher education in England… This will help educate tens of thousands more nurses and ensure those who want to join the profession are no longer deterred by financial hurdles.

The real “chaos” would be 5 more years of Tory rule

Tory lies didn’t stop with the NHS, though. The party also claimed “taxes would go up by £2,400 per person every year” under Labour. That’s a lie. Because Labour only plans to increase taxation for the top 5% of earners. But that fact didn’t stop Johnson fibbing again, repeating that Labour’s plan would mean “higher taxes for everybody in this country”.

The Tories also sought to portray their strategies on borrowing and debt as sensible, claiming to be the party of “economic success” and a “strong economy”. In fact, the party’s website has “a strong economy” as one of four key priorities. On the other hand, it argued that Labour would bring “economic chaos”, saying a vote for Labour would be “a vote for chaos”. But in reality, it’s the Tories who are bad with the economy. Because since 2010, the UK’s debt has almost doubled, despite severe austerity. And numerous economists have insisted that:

Don’t believe a word the Tories say on the economy. We’ve had the slowest economic recovery on record and barely avoided recession last month. #conservativemanifesto pic.twitter.com/GzvzSWuP8n

The idea that the Tories are not the ‘party of chaos’, meanwhile, is utterly absurd:

Boris Johnson, who leads a party responsible for three elections, two referendums and three prime ministers in five years, warns voters there will be “chaos” unless they vote Conservative.

This election, the choice is clear.

Do we want the Tories – who’ve brought us nine years of chaos, failing on both the NHS and the economy (and many other fronts)? Or do we want bold, common-sense investment in Britain’s future from a Labour leader who has consistently opposed the Tories’ devastating ideological austerity?