Truth wasn’t the only thing missing from the Tory manifesto launch. Nobody can find Jacob Rees-Mogg. - Canary 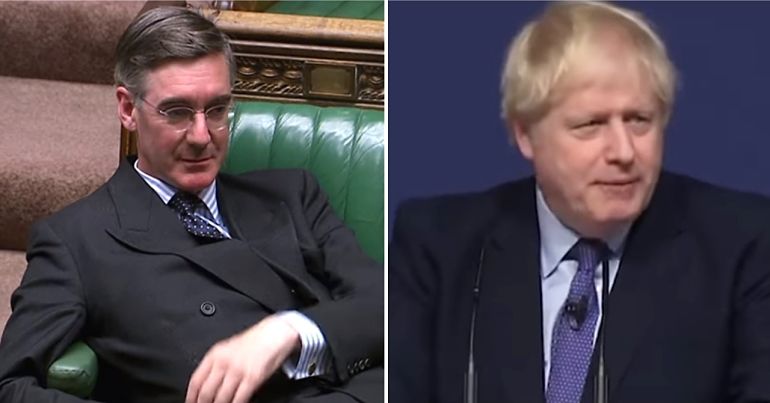 In addition to an absence of truth in the Tory manifesto, there was one other significant absence from its launch on 24 November. Leader of the House and walking cliche Jacob Rees-Mogg was conspicuous by his non-attendance:

Jacob Rees-Mogg still not allowed out. Whole cabinet but him are in Telford for manifesto launch

Too toxic for the Tories?

Regardless of his whereabouts and the real reason for it, people online were more than happy to express how they feel about this disgraceful excuse for a politician:

Too toxic even for the Tories. His opinions so virulent they’ve had to quarantine him in case they’re contagious because they know there’s no cure. 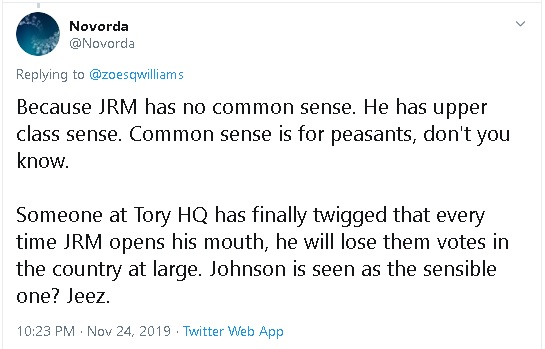 Indeed, it seems even the Tories would rather the despicable Rees-Mogg would fade away until the election is over. Because one Tory minister seemed somewhat reluctant to discuss it:

The speculation was that the Tories kept Rees-Mogg away following his disgusting comments on the Grenfell fire, where he blamed the victims. He suggested those who suffered and died in the fire didn’t have the “common sense” to ignore advice from the fire brigade and flee the burning building.

And during an emergency debate on Brexit in the Commons on 3 September, he faced criticism for “arrogantly” lounging on the benches as a serious debate took place.

Rees-Mogg said he was absent from the launch because only “fully Cabinet members were expected” there. But that doesn’t add up. While not a cabinet member, as leader of the House he’s part of the Tory public face. And other non-cabinet members attended the launch.

A Tory trick of late

But then again, we probably shouldn’t be too surprised by his absence, as it appears to be a bit of a thing for the Tories.

In September, Boris Johnson dodged a press conference in Luxemburg. Then, at the start of this election campaign, Conservative Party chair James Cleverly allegedly failed to turn up for an interview on Sky News. Meanwhile both Johnson and chancellor Sajid Javid have been accused of ‘chickening out’ of live TV debates on Channel 4 with their Labour counterparts.

Gone but not forgotten

It would indeed be great news if the Tories finally had a change of heart and could no longer tolerate Rees-Mogg and all he stands for. But that’s highly unlikely. It’s more likely this is just temporary optics to ensure he doesn’t embarrass them any further.

Either way, people won’t forget how hurtful and offensive this despicable character is. And how utterly unfit both he and his colleagues are for any public office.