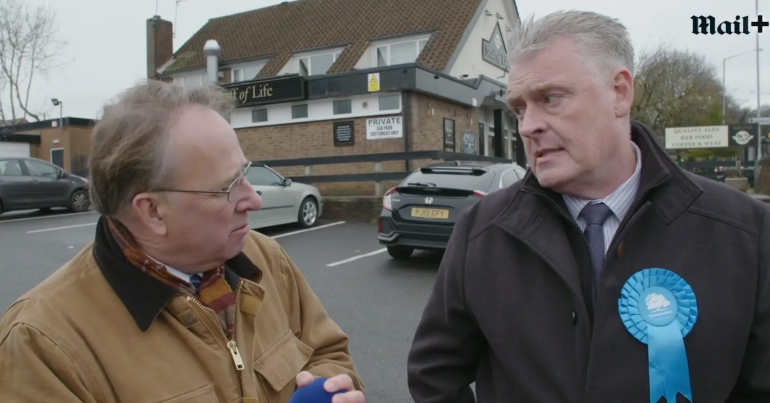 The Tory candidate who hit the headlines for espousing forced labour camps has hit the news again. This time, it’s for deliberately trying to manipulate the media to make him seem popular on the doorstep. In other words, he was trying to create fake news.

Lee Anderson is running in the Tory/Labour marginal seat of Ashfield, in the East Midlands. Labour narrowly won the seat in 2017 by just over 400 votes. But Anderson’s dirty tactics should provide yet another reason why no one in Ashfield should vote for him.

Anderson recently set out his plan to deal with anti-social behaviour, saying:

Michael Crick from Mail Plus caught Anderson redhanded “setting up the apparently spontaneous doorstop encounter beforehand”. The reason Crick could do this? Anderson had seemingly forgotten he was wearing a radio mic!

Absolute scenes as @MichaelLCrick catches a candidate in the act of setting up a “friendly voter” on the doorstep. (Video credit @MailPlus_) pic.twitter.com/azdtVk20eA

‘Just make out you don’t know me’

Anderson is clearly heard saying on the phone:

Just make out you… know who I am… you know I’m the candidate, but not a friend. Alright?

And it gets worse. Because Anderson then lied and told Crick that the call was about “campaign materials”. While Crick says he has “long suspected” such encounters were set up, “this is the first time” they’ve managed to catch someone in the act.

You can watch the full video of Crick’s encounter with Anderson here.

This election will be remembered for the number of dirty tricks the Conservative Party has been prepared to pull. From pretending to be a fact-checker to setting up a fake Labour Party manifesto webpage, the party has shown it’ll stop at nothing to manipulate voters.

Luckily, the public appears to see through this. And alongside a PM who continually lies, this is one of the reasons why trust has become such a key election issue. This video is yet another example of the depths the Tories are prepared to plumb.

Each time footage like this emerges, it provides people everywhere with just another reason to turn away from the nasty party and embrace real transformative change.