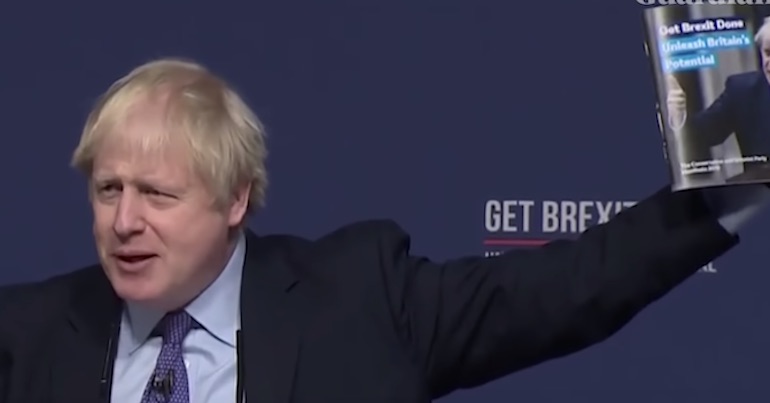 On 24 November, the Conservatives released their manifesto, which has drawn widespread criticism for its misleading claims and shady costing. But what’s received less attention is two sentences that are utterly vile, racist, and dangerous. In fact, they tip into “ethnic cleansing” for some of the most vulnerable and discriminated people in the UK.

Allegedly as part of its offer to make “our country safer”, the manifesto states:

We will tackle unauthorised traveller camps… give the police new powers to arrest and seize the property and vehicles of trespassers who set up unauthorised encampments, in order to protect our communities… make intentional trespass a criminal offence, and we will also give councils greater powers within the planning system.

The full implications of these two sentences are utterly chilling. As a member of the travelling community told The Canary, this manifesto pledge is:

backed up with incredible and intense force, criminalisation, destruction of property (everything the Gypsy couple own), forced homelessness and of course with that the removal of children. It’s disproportionate and unnecessary when the better solutions already exist, like negotiated stopping or creating more sites.

The manifesto entrenches an announcement made by home secretary Priti Patel on 3 November. This proposed giving police new powers to arrest members of Gypsy, Roma and Traveller (GRT) communities and seize their homes on private or public land. It becomes a criminal offence to stop anywhere in the UK without prior permission. At the time, Patel claimed:

Unauthorised encampments can cause misery to those who live nearby, with reports of damage to property, noise, abuse and littering… The public want their communities protected and for the police to crack down on trespassers.

On 4 November, just before parliament went into recess, Patel made a chilling announcement that she wanted to “test the appetite to go further” in criminalising travellers.

What makes this even more concerning is that, in 2011, Patel herself challenged Conservative policy, acknowledging:

But as George Monbiot noted:

It’s a Conservative tradition, during election campaigns, to vilify Romany Gypsies and Travellers: it tends to play well on the doorsteps of middle England. But [this] is something else. It amounts to legislative cleansing.

"But it says it's about unauthorised encampment", I hear you say…

You don't know this do you. Oh dear. Unauthorised doesn't mean the landowner dislikes your presence. It means the council haven't given you planning permission.

It means I can stop nowhere. 2/

This new policy also has devasting implications for every member of the GRT community with children:

With it goes my enhanced disclosure DBS and any hope of ever working again.

Honestly. I won't survive that. I can't live without my kids and I can't live trapped and broken to nothing. I don't want to.

I would rather die than lose every single part of my self all at once. 4/

She also explained that this gives the state powers to strip travelling people of everything:

What it does address is what I am doing right now. Residing in a vehicle, with a car beside. Minding my own business.

It criminalises me. It gives the state the right to strip me of my property, my home, my career, my family, my love, my future and my hope.

If the Tories win this general election, this policy will affect thousands of people.

In the UK, there are an estimated 63,000 people who identify as Gypsies and Travellers. But this figure is likely to be an underestimation. This data comes from the 2011 census, which “included an ethnic category to collect data on Gypsy, Traveller and Irish Traveller communities”. These communities are:

recognised as two distinct ethnic minority groups in law because they are recognised as members of communities with a shared history, culture and language stretching back over hundreds of years.

As such, they have – in principle – the same protections as other ethnic minorities in the UK under the Equality Act. But as a 2017 report found, GRT people face “pervasive prejudice and discrimination” daily, and:

These experiences of prejudice are seemingly so common that they have almost become normalised for these communities.

There’s also another community of “New Travellers” who are ‘cultural’ rather than ‘ethnic’ travellers. This includes many boat, truck, and van dwellers. But this group isn’t “a legally recognised ethnic minority group”.

However, all these groups suffer from racism and discrimination. As charity Friends, Families and Travellers explains:

Members of the Gypsy and Traveller communities can often face harassment and discrimination on a daily basis as a result of negative stereotypes and deeply ingrained cultural prejudices.

As one traveller called Wilski told The Canary:

I’m filled with disgust at this proposal. It’s an attempt by the elite to infringe on minority cultures who already face constant discrimination and racism. It’s especially foul given Johnson’s open-faced lies about most aspects of life with no regard for others.

This manifesto pledge entrenches this discrimination further because, as a member the GRT community told The Canary:

It’s a brutal law that draws a distinction between a Tory minister stopping in a layby with his car and caravan and a Gypsy couple doing the exact same thing on the grounds simply of not having a brick and mortar house.

As they also noted, the “core principle of British law is that it’s one law for all”. Yet the Tory pledge means:

This is not one law for all, it’s a pogrom against those not guilty of any offence… My living in a vehicle hurts no one. I don’t deserve this. I’ve never crashed a football field or left litter. I’ve never committed a crime or even generated a police complaint.

But this proposal is utterly terrifying:

The violence of me and my family being forcibly destroyed should scare all reasonable people. It’s ethnic cleansing.

This isn’t an empty warning. Attacks on GRT communities also have a chilling legacy. Because the Nazis murdered “up to 500,000 Roma” during the Holocaust. And as far-right populism rises in Europe, so too have “hate crimes and attacks against the continent’s 10-12 million Romani inhabitants”.

These two sentences in the manifesto prove just how right-wing another Tory government will be. We have one chance on 12 December to stop this.