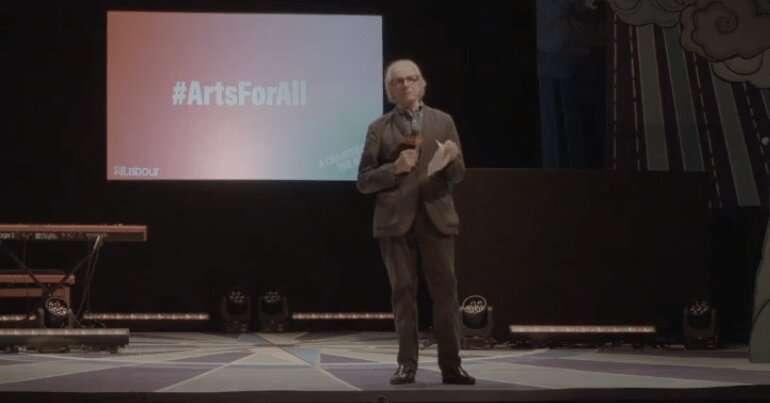 Renowned director Ken Loach nailed the subtle reason why Labour’s commitment on the arts will ‘transform’ Britain on 24 November.

“Bigger than it may seem on paper”

Loach – the director of I, Daniel Blake, Cathy Come Home, and his latest work Sorry We Missed You – was speaking alongside musicians such as Lily Allen and MIA at Labour’s ‘Arts for All’ launch. The party has pledged £1bn of cultural investment in art and music.

He began with a reference to former Labour prime minister Clement Attlee’s promise on the subject, saying the 1945 manifesto was “very relevant to what we’re doing today”. Its commitment, he said, was:

‘We desire to assure to our people full access to the great heritage of culture in this nation.’ And what is happening today is renewing that promise.

So to know that a Labour government will make certain that every child has the chance to learn an instrument, that’s absolutely transformative. Much bigger than it may seem on paper. Because it means hope.

Labour’s ‘Arts for All’

Join us LIVE for our ‘Arts for All’ launch.

The arts are a common inheritance that make our society culturally richer and put a smile on all our faces. We must cherish them and protect them.

Loach also condemned the Conservatives’ record on the matter, saying:

it isn’t just knowing of the culture of the past, but releasing everyone’s creativity. And in that respect, it’s such a tragedy that the funding for arts in schools has decreased. And we see that in the figures, and the great decline in arts entries for GCSE – 35% less and a quarter less entries for A levels

Soon after David Cameron took power in 2010, his government cut funding for the Arts Council England by 30%.

Loach and Corbyn are right. We need to live a life beyond just work. And free expression through individual creativity is a key route to happiness.

But it’s not just that art provides therapy and an outlet for the artist. The product itself – the music track, painting or digital creation – can be invaluable. Artwork is a permanent piece of cultural representation that isn’t just consumed and cast away like old clothes or a hamburger. It can provide meaning, solace, and emotional truth for generations to come.

Labour’s ‘arts for all’ pledge is yet another reason we must fight tooth and nail to defeat the Conservatives.