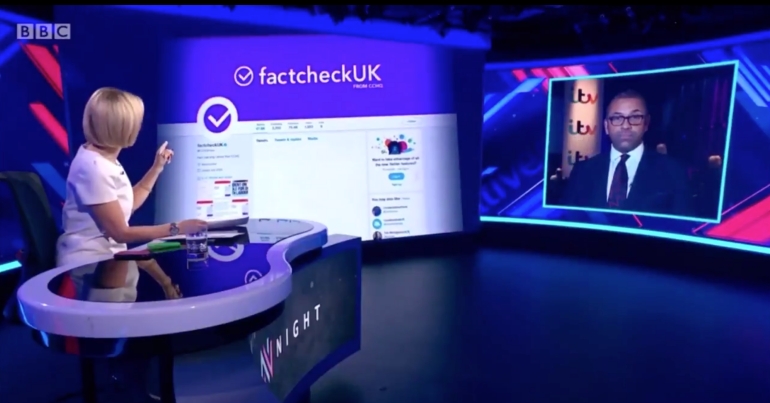 During the leadership debate on 19 November, the Conservative Party stooped to a new low. It rebranded its @CCHQPress Twitter account as “factcheckUK”.

But this deception was too much for the BBC. And even it couldn’t hide its contempt at what the party had tried to do.

You were trying to coat your propaganda as hardened fact.

When Cleverly tried to say it was still clear that it was their account, Matlis was direct:

You were misleading the public.

Cleverly refused to answer direct questions as to whether he knew of the plan to rebrand the account. But Maitlis refused to let him waffle, saying:

You dressed up party lines as a fact check service: that is dystopian.

And Maitlis nailed the fundamental reason why the party took this action:

You know that people do not trust you, so you have to put something out and call it a fact check instead.

.@maitlis: “You were misleading the public. You were trying to coat your propaganda as hardened fact.. You dressed up party lines as a fact check service: that is dystopian.. You know that people do not trust you, so you have to put something out and call it a fact check instead” pic.twitter.com/UOyLgCx7hi

People on social media were quick to comment on the interview. The Europe editor at the Daily Telegraph labelled it brutal:

Brutal @maitlis interview on @BBCNewsnight with @JamesCleverly about the rebranding of @CCHQPress Twitter account as a FactCheckUK account. “Dystopian” – squirming over whose bright idea that was…

Tories branding their press office as an independent fact-checking account isn't a 'daft row to pick'. It is sinister manipulation, a deliberate attempt to confuse the public, sow distrust of all politicians. @maitlis #Newsnight nailed wretched @JamesCleverly on the lies. https://t.co/Gphyxrwi1p

Meanwhile, Guardian writer Marina Hyde noted one aspect that the Tories will be happy with.

Enjoyed @maitlis dealing with James Cleverly, though can’t help thinking the Tories will simply be pleased with the amplification of some “Corbyn lies” message and that’s how these things work. We need so much better regulation pic.twitter.com/7ExhswEn5x

It’s no surprise that the Conservative Party decided to pull this stunt. After all, Boris Johnson is well known for his lying. And if it’s left to genuine fact-checkers, the results don’t look so good for the PM.

For example, Full Fact states that the Conservative Party’s claims about immigration aren’t “credible”. And in fact-checking the leadership debate, the site states that Johnson said UK corporation tax was “already the lowest in Europe”, while Jeremy Corbyn “would whack it up to the highest in Europe”. But the facts tell a different story:

We don’t know Labour’s policy for corporation tax as its manifesto isn’t out yet, but its proposal at the last election was to raise corporation tax to 26% by 2020/21, which wouldn’t be the highest in Europe. For example, in France, it’s currently between 31% and 33.33%.

Pretending to be a fact-checking service was a disturbing new low even for the Conservative Party. But the one positive thing we can take from all of this is that even the BBC wasn’t fooled. And if we start seeing more Conservative politicians interviewed the way Maitlis interviewed Cleverly, our election coverage might just become a little more balanced.