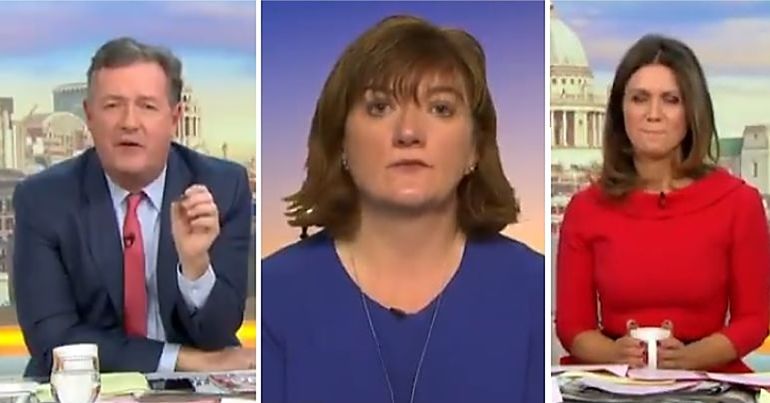 According to the Conservative manifesto, voting Tory at the election would see 50,000 extra nurses in the NHS. But this isn’t true. In fact, people started pointing out what a crock of shit the claim was almost immediately after Boris Johnson uttered it at the manifesto launch. Nonetheless, Tory MPs and ministers are still repeating it.

Nicky Morgan did so on Good Morning Britain on 25 November. Thanks to the show’s hosts, however, the lie came crashing down.

There will not be 50,000 more nurses in the NHS if people elect another Tory government. The 50,000 figure those seeking re-election are bandying about misleadingly includes 19,000 existing nurses politicians say they can retain:

Boris Johnson pledge for 50,000 more nurses not quite what it seems – 12k from abroad, 14k new undergrad students, 5k degree apprenticeships. Which leaves 19k nurses “retained” who would otherwise have left… so not “new” nurses at all

Given that a lack of trust in Johnson’s government is a big issue in the election, presenter Piers Morgan asked the culture secretary:

When he [Johnson] leads a manifesto [and] the flagship policy in it is there’s going to be 50,000 more nurses, and now you as the culture secretary, a member of that cabinet, a member of the government, admit that 19,000 of them already are NHS nurses, viewers at home go ‘well, this is complete nonsense’.

Morgan doubled down, saying her party was “very clear” there would 50,000 more nurses. Pressed again on the 19,000 existing nurses, Morgan described their inclusion in the figure for “new” nurses as “realistic”. Clearly getting nowhere, the hosts changed tack. Susanna Reid said:

But it’s not more nurses. Nicky Morgan, isn’t it a bit like saying ‘on Good Morning Britain tomorrow morning there will be three more presenters’, and then tomorrow you just have exactly the same number of presenters because you’ve managed to persuade me, Piers, and Charlotte to carry on doing the job tomorrow? It’s not more. …

Do we not have really odd maths going on here?

Indeed, the maths is so obviously and blatantly wrong, the presenters could ultimately do nothing but laugh at the absurdity of Morgan’s position.

Meanwhile, Johnson made another misleading claim at the manifesto launch. He told the audience, to rapturous applause, that the local A&E in Telford will be “kept open”. The A&E is due to be downgraded so the PM’s claim was music to many people’s ears. But the downgrade is still going ahead, according to health secretary Matt Hancock.

Even for @BorisJohnson for his lie to keep Telford A&E to be kept open, to be exposed by his own Health Secretary @MattHancock in less than two hours is some kind of record. Even for him. #ConservativeManifesto #ToryManifesto #LiarJohnson pic.twitter.com/6bA5G2XnKO

Trust is a defining issue in this election. So are lies. One after the other, the Tories just keep trotting them out. This situation is, however, not amusing. Because although the ITV presenters rightly called the governing party out, these falsehoods may have taken root in many people’s minds.