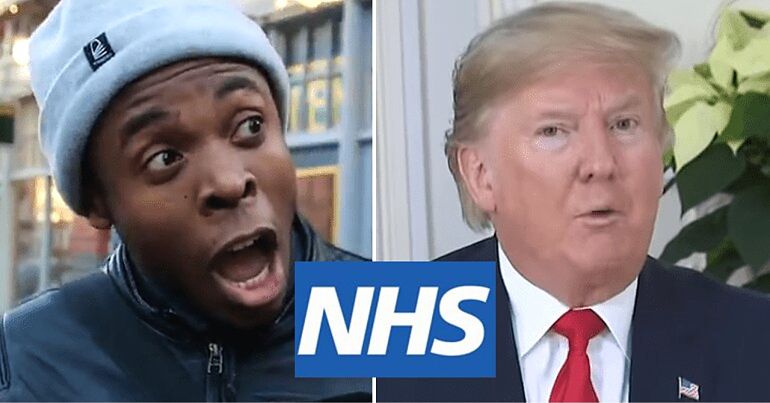 A reporter for Joe has been confronting UK residents with the cost of healthcare services and products in the US. The video comes amid reports that the Conservatives want to give US corporations access to our NHS in their post-Brexit trade deal. The result of that could eventually be US prices in UK hospitals.

People were particularly shocked at the average cost of having a baby in the US, which is around $10,000.

The reporter demonstrates how shocking healthcare costs can get once privatisation sets in:

The cost of healthcare if Donald Trump gets his hands on our NHS:pic.twitter.com/td7oQAnNve

Another striking cost is US hospitals charging people to hold their own baby after giving birth.

Trump in the UK

Corbyn says leaked government documents show that the US will have “total market access” to the NHS in a post-Brexit trade deal with the Conservatives. Indeed, in June 2019, Trump said the NHS is “on the table” in the negotiations.

Now, with less than two weeks until election day, Trump is in the UK. And he said:

I don’t even know where that rumour started

Although, there are many reasons for the concern over the Conservatives privatising the NHS:

Unless we fight them off, UK and US healthcare hawks will start making a killing off our sick relatives, friends and neighbours. Such eye-watering profit means the US is spending about 17% of its GDP on healthcare. That’s over double what the UK is spending and the US doesn’t even nearly cover everybody. These facts suggest that it’s economically and morally superior to provide such an essential service for public good rather than profit. Your vote on 12 December couldn’t be more important.