UK Palestinians, Jews and their supporters join together to protest against a visit by a right-wing Israeli charity - The Canary 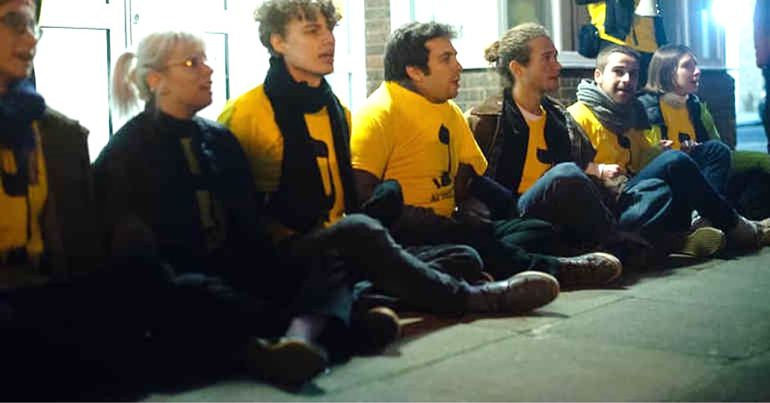 On Sunday 1 December, Palestine solidarity and other groups came together to protest a talk by an Israeli charity that advocates for the demolition of Palestinian homes.

The event was hosted by UK Lawyers for Israel, and included a speaker from the right-wing Israeli charity Regavim.

Protesters are opposing a London meeting by far-right Israel organisation Regavim who use the courts to support the destruction of Palestinian homes. #GroupPalestine #قروب_فلسطيني pic.twitter.com/NUghMOujnj

The event had originally been scheduled for September, but was cancelled after groups announced plans to protest the event.

Banners on display at the protest read “Every Settlement is a war crime – Shame on Regavim and UK Lawyers for Israel” and ‘3000+ children homeless after illegal home demolitions’.

Activists from British Jewish group Na’amod held a sit down protest outside the doors of the meeting venue in Camden. People joined together in reading the Jewish prayer for the home, a protest against the suffering caused by Israel’s home demolition policy:

@NaamodUK's action against Regavim has attracted a huge amount of support, which is fantastic and I’m so proud of our dignified, meaningful protest, singing psalms, reciting the Jewish prayer for the home and explaining why there is nothing Jewish about home demolitions. pic.twitter.com/j1bwdubxmo

In a Hebrew language tweet, Regavim responded by calling the protesters ‘self-hating’ jews.

Pushing the Israeli state to demolish more and more homes

Regavim describes its mission as ensuring the “responsible, legal, accountable and environmentally friendly use of Israel’s national land”. On its website it refers to Palestinian construction as a “Silent Conquest”:

Acre after acre, house after house, buying, squatting, illegally cultivating the soil that is not theirs…

Palestinians are calling for action against Regavim because the group is pushing the Israeli state to carry out more and more demolitions of Palestinian homes and property.

Regavim files petitions in the Israeli courts calling for demolitions, and hires fieldworkers to spy on Palestinian communities. They often use drones to identify structures which breach the Israeli occupation’s apartheid planning laws.

“When people donate to Regavim, they are donating to our displacement”

Palestinian statements seen by The Canary show the devastating effects of Regavim’s work. According to Awdah Hathaleen, a community organiser from the West Bank village of Umm Al Khair:

Before Regavim, may[be] our homes would be demolished every couple of years. Now our homes are demolished once a year. Because of all the petitions, they file in the Israeli courts against not only the people in the South Hebron Hills but in the Negev and in the Galilee, to have their homes demolished – people are now only living their life in the courtrooms rather than with their children. We spend [more] time talking with lawyers than we do our family members… We ask that people stand in solidarity with us and raise awareness that when people donate to Regavim, they are donating to our displacement.

Nasser Nawaja, a resident of the village of Susiyah, said:

More than 450 people in the village of Susiyah, including children, women and elderly people, are facing imminent expulsion from their land and homes. We live under this constant threat because of Regavim’s legal work in the Israeli courts and the political pressure on the Israeli authorities.

‘The international community won’t stand for it’

Basil Adra’a, from the Palestinian Protection and Sumud Committee (Sumud means ‘steadfast’ in Arabic) in the village of At Tuwani, said:

Regavim has pushed us further out into the most vulnerable and marginalized communities. We find ourselves continually in the 918 Firing Zone watching as they use their political influence to dismantle Palestinian infrastructure. They’ve pushed the Israeli military to block roads that lead to hospitals… Regavim has led a campaign forcing the Israeli military to shut off the water supply to those communities by cutting water lines and confiscating water trucks. What we see is if they can’t take the land through legal measures, they enact a strategy to make life so miserable that the Palestinians will leave their lands. But we are here to say we will stay. The international community won’t stand for it, because they will know the truth behind Regavim’s activities.