Turkish President Erdoğan is being hosted in the UK, meanwhile Turkish troops commit another massacre in northern Syria - Canary 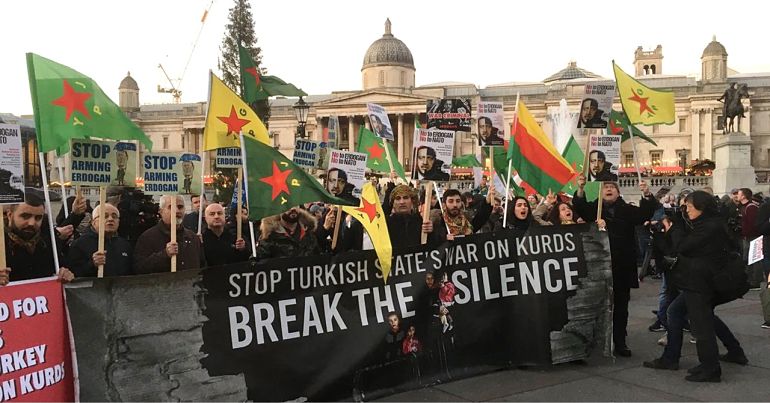 Turkish President Recep Tayyip Erdoğan was hosted at 10 Downing Street on Tuesday 3 December alongside other NATO leaders. He will be attending the NATO summit, happening on 3 and 4 December near London.

Erdoğan has also reportedly been invited to the opening ceremony of a mosque in Cambridge.

On Tuesday, NATO leaders Trump and Erdogan, will attend a reception at Buckingham Palace.

Instead, Turkey’s dictator Erdogan should be standing trial for war crimes against the Kurdish people!

Join us to protest against Erdogan, Trump and NATO: https://t.co/XrBAnFsJtC pic.twitter.com/13U1McWp8Y

One protester tweeted from Trafalgar Square:

A great crowd is marching from Trafalgar Square to protest against today's #natosummit and the presence of #DonaldTrump and #Erdogan#NATOLondon#politics pic.twitter.com/rIZRlVbqr7

Turkish-led forces invaded Northeast Syria (aka Rojava) on 9 October. The NATO member has faced accusations of ethnic cleansing and war crimes, and its invasion has so far killed over 300 civilians, created around 300,000 displaced people, and allowed hundreds of Daesh (Isis/Isil) supporters to escape detention.

On Monday 2 December, eight children and two adults were killed by Turkish shelling in the city of Tel Rifaat. According to the Rojava Information Center:

Eight children, one man and one women were killed in Turkish shelling of Tel Rifaat today, Ibrahim Shekho of the Afrin Human Rights Organisation confirms to @RojavaIC, speaking from Tel Rifaat.

12 other individuals were wounded, with some in serious condition. pic.twitter.com/9v1CzdySxu

UNICEF released a statement on the killing of the children:

We are shocked and saddened at reports that eight children were killed and another eight were injured in attacks on Tal Rifaat town, northern Aleppo. All of them were under the age of 15.

NATO's 2019 summit is being held today in London, with NATO member Turkey's invasion and occupation of North and East Syria still ongoing.

See our report here for a full overview of abuses by Turkey and Turkish-backed forces, possibly amounting to war-crimes: https://t.co/xa69uLFuJV

Tomorrow at the @NATO summit in #London you have to decide:

Become the one who has taken the side of ethnic cleansing, rape & murder or who stands up for women, life & freedom.#messagetojenspic.twitter.com/PHvFobo6wq

In it she says:

10 civilians, most children, even toddlers, directly targeted, murdered by the Turkish state just before it was officially welcomed to #London @NATO summit.

Turning a blind eye, not reacting against Erdogan's actions, you are accomplice to them.@jensstoltenberg#Riseup4Rojava pic.twitter.com/Eq6IeMUbuU

Call to take to the streets

On 3 December, KCDK-E, a European Kurdish organisation, called for people to take to the streets over the killings in Tel Rifaat:

In response to the civilian massacres and attacks we call on our people and all solidarity circles to take to the streets.